Someone asked me last week if I did Sri Lankan-flavored Thanksgiving, and we don’t usually. Sri Lankan Thanksgiving in my mind is the time when I brought Kevin home to Connecticut for the first time. All the relatives came over to my parents’ house for a big American Thanksgiving, eating turkey and stuffing and all the trimmings around 3 p.m. Classic American flavors, and I warned Kevin to eat lightly, but I think he didn’t believe me when I told him this wasn’t the main event.

As foretold, around 8-9 p.m., we sat down to the REAL dinner — rice and curries, a groaning table filled with them, with short eats (delicious fried appetizers) before, and dessert after. American Thanksgiving was a fun cooking challenge for my mother and aunts back in 1995, but it wasn’t like it was proper food for a party…

I had warned Kevin that he’d better eat heartily of the rice and curries if he ever hoped to be accepted in my family, esp. since various of the aunts had made various dishes — you wouldn’t want to slight anyone! So he manfully tried. And I usually avoid words like ‘manfully,’ but in this case, it feels appropriate. He called upon all his man-stomach’s powers to avoid disappointing his girlfriend’s family.

They fretted that our food would be too spicy for my blond, blue-eyed boy, but Kevin was fine with heat; he’d grown up in California eating Mexican-influenced food. I’d seen him chomp down on a raw habañero (on a dare), so I knew he’d have no trouble with the heat levels of our curries. But the sheer volume almost unmanned him! Somehow, Kev made it through second dinner, though his stomach was aching, and won the right to be grudgingly accepted into the family. My hero.

And now here we are, more than 25+ years later, and I don’t make rice and curry in my own house for Thanksgiving. I enjoy the cooking challenge of turkey and stuffing and all the trimmings, and teaching the kids how to make these dishes. It was sheer delight yesterday evening, sitting on the couch watching an episode of Queer Eye with Kavi snuggled up with me, letting Kevin teach Anand how to make Jiffy cornbread.

But this year, I did try to add a little subtle Sri Lankan flavor to the cornbread-sausage stuffing. I didn’t want it to be overpowering; I wanted the meal to still say “Thanksgiving” instead of “Sri Lanka.” But a hint of cumin and black mustard seed worked rather nicely here, accented with lime for balance. Pleasant! 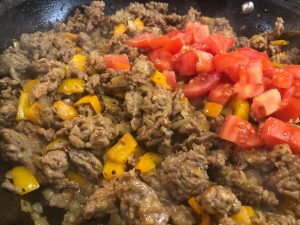 While I used black pepper this time around (due to the Anand’s continued lack of heat tolerance, sigh), what I think would really excellent would be green chili, which is so lovely with corn generally. That would cut through the richness of the sausage slightly better. But this is lovely, and I’ve already snagged a bite straight out of the fridge for breakfast, and want to go back for more. That’s the sign of a good stuffing in my book! 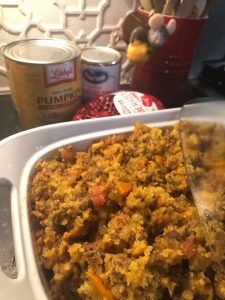 1. In a large sauté pan, sauté onions with ginger, garlic, cumin seed, and mustard seed over medium heat in oil or ghee. Stir as needed, until onions are golden-translucent.

2. Add bell pepper and sauté a few minutes more, until softened, then add ground sausage, salt, and pepper (or chilies), and sauté until sausage has browned.

3. Stir in tomatoes and lime juice; sauté a few minutes more. Then add chicken broth and bring to a simmer.

4. Crumble in corn bread and gently combine. Turn off heat, and when it’s well-blended, either serve immediately, or transfer into a baking dish for storage in the fridge.

NOTE: May be baked to bring back up to serving temperature — 30 minutes @ 350, covered, then remove cover and bake 15 minutes more.