I must note that I feel personally betrayed by this gravy boat. I just bought it, and I think it’s SO lovely, but it doesn’t work for gravy. The spout is narrow enough that the gravy doesn’t pour out fast enough, and so it spills out over the neck instead, leading to many jokes about the bird that’s just had its throat slit — I think it was Kevin who suggested using it for red sauce instead, to intensify the effect, and Anand thought that was hilarious. Hmph. 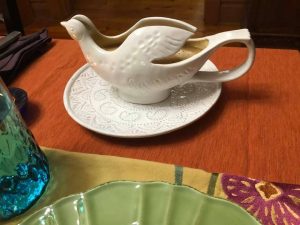 Part of me wants to return it to Anthropologie with indignant complaints, but I *think* it will actually work just fine for something more liquid, like an au jus, so I’m going to test that, and if so, we’ll keep it. Because it’s so, so pretty. I have a real weakness for animal-themed dinnerware. But if you had seen just how dismayed I was yesterday, as I tried over and over to pour it without gravy gushing down its neck, you would have laughed.