Quick note — I realized this morning that 6 people are already signed up for the new $10 / month subscription tier on Patreon (US-only, edible treats and such), and I want to be sure that it stays manageable for me, so we don’t run into fulfillment problems. So I’m capping it at max 25 subscribers for now!

Assuming that goes well, I’ll likely open it up more in a few months. I expect the first batch to go out in March (and will definitely have Neapolitan chocolates; let me know if you have other requests for particular confectionery, and I’ll think about it), for those who sign up in February. After that, they’ll ship out every three months for the rest of 2020.

Hey, it looks like people can post reviews on the Books-a-Million site now? Maybe? If someone is kindly inclined and wants to get the ball rolling (and let us know if it works), that would be GREAT.

Adding another SF event on 3/24! (Starting to finally feel like a book tour…)

Having a rough night, but mango-chocolate chip crepes with whipped cream did help briefly.

Hey, folks. Quick check — we’re setting up a Patreon subscription, so that people can get treats from me reliably. (Sadly, food treats can only be shipped in the U.S. right now — anything else is beyond my capacity!)

Here’s the current description — how does it look? Any thoughts?

$10 / month tier:
“Once each quarter, I’ll mail a present to you in the mail! A selection of homemade edible treats, a piece of domestic creative writing, and a tiny extra surprise.”

So it ends up being $30 / quarter, which includes shipping. Does that seem reasonable, pricing wise?

I’m being super unspecific about what the edible treats will be, because I don’t know yet, and as we’re figuring this out, it gives me the flexibility I need. Down the road, we might offer other tiers, and more specificity, but I think that’s more than I can mange at the moment. Thoughts?

I’m not sure how to manage allergies and food preferences — I think I can reasonably easily do nut-free / vegan / gluten-free on request, with the provision that I can’t guarantee a completely nut / gluten-free environment in the kitchen overall.

1) I’ll be there March 4-8 for FogCon in Walnut Creek, and may have time for a book event. What bookstores / libraries would you recommend in: Marin / Sausalito / San Francisco / Oakland / Berkeley?

2) I’ll be there March 23 – 29, visiting family and friends for spring break, mostly in South Bay, but also up in Marin. What bookstores / libraries would you recommend in: South Bay and Peninsula?

Contacts particularly welcome, if you happen to know people on staff.

ALSO: If you’re willing to be part of my Bay Area book tour crew (I need a jazzier name for this!), helping to publicize and round up people to attend, would love to know that too! I’ll be sure to send you details so you don’t miss anything, and I may even be able to bring along some special treats for you. I’d love to speak to a packed room. 🙂

[goes off, brainstorming ‘book tour crew’ names. Something with a Sri Lankan mythical beast? Garudas, makaras. Won’t mean anything to most of y’all, though, so that’s a shame. Something with food? Oh, naming things is hard.]

Today I finally started the morning with 30 min. walking on treadmill (at 2.0 speed) while doing recipe posting (instead of sitting on couch). I’ve been meaning to get back to that for weeks, and somehow every morning I just didn’t. But today I did.

And I’m now making a batch of sherried mushrooms with Swiss for an omelette this morning + egg bites for the rest of the work week. Going to grill some shrimp later today, to toss into caesar salads, etc. I’ve been so harried for months that all my healthy habits fell by the wayside, but am determined to get them back, esp. as clothes are getting a bit tight. Bah.

Also, this is yummier than grabbing random carbs just because they’re easy and fast, and I feel physically better if I start the day with walking — more energy throughout the day, sleep better.

Just need to slow everything down a little bit overall. Breathe.

A friend asked me for a good spinach curry recipe, and I had to admit that I’ve never managed one I was happy with, so I tried working on it this weekend. I love saag / palak in restaurants, but my earlier attempts came out sort of watery and lacking in flavor; they just made me sad.

So I spent a while looking up recipes, and it seemed like most of the ones I found which might approximate restaurant saag used chopped spinach and went heavy on the cream. Which, okay, cream makes things delicious. But I was hoping to do a vegan version, and also one that was a little bit lighter and healthier, with some good fresh spinach brightness.

The key to that, I think, is the onions. And I know you’ve heard me go on about onions before, and their importance to Sri Lankan cuisine, but seriously, the amount of flavor you get out of a properly cooked onion is hard to beat.

For this, I chopped a mix of red onion and shallot — you could do either separately; I just happened to have both on hand. Yellow or white onions would also be fine, but the red onion and shallots gave a sweetness and delicacy that I thought worked particularly well with the fresh spinach. (And of course, they were awfully pretty contrasting with the curry leaves and green chili as I cooked!)

After that, it was a fairly standard base approach — sauté in oil or ghee with cumin seed and mustard seed (I call for traditional black mustard seed in my recipes, but brown is really fine; I’d avoid yellow, though, as it changes the flavor noticeably) until golden. Keeping heat on medium or even medium-low will reduce the risk of burning if you’ve stepped away to chop something; it’ll take a little longer, but the onions also caramelize beautifully this way, so if you can afford the time, I’d do that.

Add garlic after a bit (if you put it in with the onions initially, it’s susceptible to burning), curry leaves if you have them (there are no good substitutes, so just skip if not), and chopped green chili. (I didn’t have fresh ginger on hand, but if I did, I would have added some with the onions. Since I didn’t, I added a t. of ground ginger later in the dish, with the turmeric and salt.)

This basic approach is what I’d recommend for most of our vegetable curries, and indeed, for curries in general.

I’ve found over the past few years of talking to folks about their cooking habits that a lot of people skip the onions in a dish, or reduce the amount dramatically, not realizing that they’re the base of the flavor. That applies to Italian spaghetti sauce as much as to Sri Lankan curry.

So once you have the seasoned onions cooked down nicely (see previous post), the next step is to add some more spices — turmeric and salt are really all you need at this point. And then you could use chopped frozen spinach, but if you have fresh baby spinach, it’s lovely — I dumped two bags in here.

You basically can’t stir them at this point without lots of spinach falling out of your pan (I tried), but if you’re just patient and let it be, within a few minutes the spinach will have reduced enough to stir into the onions for a few more minutes.

You could stop the recipe at this point if you’re aiming for super-healthy low-calorie greens, and it would be tasty! But I definitely wanted a sauce, and anyway, coconut makes things better. So I added 1 cup (half a can) of coconut milk and stirred that in too. 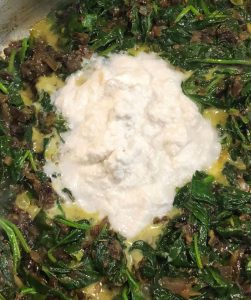 You’re almost done at this point — the last step, always, is to check the seasonings. I’ve been surprised to learn, over the last few years of working on the cookbook, how many people are intimidated by phrases like ‘salt to taste.’

As a very rough estimate, most ‘feed 4-6 people’ dishes I use call for a teaspoon of salt for the pot, so if you’re really not sure, I’d go with something like that.

(Better to undersalt than over, so if you’re not sure, start with 1/2 a teaspoon — you can always add more, but you can’t take salt out of the curry!

If you DO oversalt, that’s tricky to fix — if it’s a dish where you can add potatoes, I’d do that (you can cut them up and cook them in the microwave separately, or boil them, so that you’re adding cooked potatoes to the dish, rather than raw potatoes which will make the whole dish cook for an extra 20-30 minutes, dulling the overall flavors.

Alternately, make a second batch of the dish, without salt. Combine them, so the salt flavors the whole thing more evenly. And if you have too much for your needs, then freeze some. That’s a lot of work, though, and requires you to have enough ingredients on hand to do this. Or you can freeze the over-salted batch to fix on another day, labelling appropriately. Yes, I’ve done this. Have I mentioned that I *hate* wasting food?)

I always take a little bit of sauce at the end, dab it on the back of my left hand, and lick it up to taste. Sometimes it’s perfect; sometimes it wants a little more salt. For this one, I added another 1/2 t. of salt, and then a T of fresh-squeezed lime juice. (Bottled is fine if you don’t have fresh on hand.)

Be a little careful adding lemon or lime if you’re using cream instead of coconut milk — when acid hits hot dairy, it tends to curdle. You’ll make cheese, which is another post altogether. So stir in the cream or coconut milk, let it cook and blend with the other ingredients for a few minutes, make sure your heat is at medium and not boiling over, and THEN add the lime juice.

The result will be glorious. 🙂 Enjoy with rice and curry, or as we did this weekend, spread on naan and toasted as delicious flatbread / pizza. 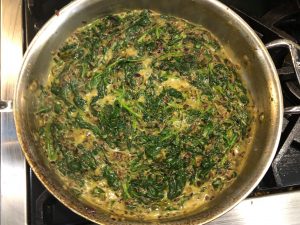 (This is the actual recipe — see previous two posts for Cook’s Illustrated-style explication of recipe development + paean to onions.)

2. After a few minutes, add chopped garlic, salt, and turmeric, and continue cooking until golden-translucent, stirring as needed, about 15 minutes total.

3. Add spinach to pan (in two batches if necessary, depending on size of pan), let cook down for a few minutes. When reduced, stir into onions and cook for a few more minutes. 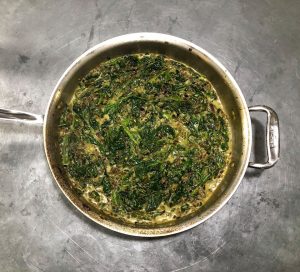 I could photograph this spinach curry ALL DAY. 🙂

(And hey, ten years in, my zinc island countertop really has weathered and patinated the way I’d hoped. Makes me so happy. (It’s not heat-proof, though, so use with care.))

(How much mess was generated in this process? So much. Did we make her clean it up? Not this time — we’re mostly working on her being confident in the kitchen right now; we’ll get to ‘clean as you go’ when she’s a little steadier on the actual cooking part. Our Valentine’s present to her was silently cleaning it all up later in the day… 🙂 )

Got to love the heart cutter.