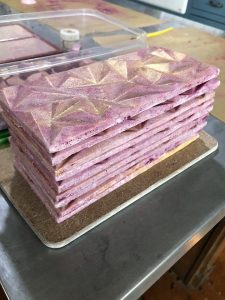 So, I think I’m ready to talk a little about this new project that crystallized last week. (Photo of dragonfruit chocolate bars ‘crystallized’ for inspiration.)

There are multiple elements coming together in this, things I’ve been working on and thinking about for a long time. I’m still not positive of what the final shape will be.

• the memoir: I’ve been working for a while on a project titled _Domestic Resistance_, a meditation on how we stay sane while under siege in the Trump presidency, how handwork and reclamation of heritage skills, appreciation of culture and diversity, celebration of community and the joys of making all came together to sustain me (as I worked on my Sri Lankan cookbook in the last few years) through intense work, deep political frustration, and occasional flailings of despair. Asking how we can work for change without exhausting ourselves.

• the makerspace: we may have found a place in Forest Park for the first stage of the writing / textile arts / tech makerspace that we started planning two years ago. Our hope is that it allows the community to share their knowledge, help each other over the initial humps of uncertainty and anxiety, finding our way to new skills and approaches that make our lives better in a host of ways. I have some legal and financial details to work out still, and then there’ll be a Kickstarter to help get us off the ground (looking for around $25K in initial funding, I think), but I hope we’ll be up and running soon, possibly by May.

(NOTE: the space won’t be wheelchair accessible, unfortunately; you’ll need to be able to navigate a flight of stairs to access it. My plan is that if people who can’t access it want to sign up for a class, we’ll find an alternate accessible location for that class. And then long-term, we’ll continue looking for accessible spaces in the area. Ideally, I’d eventually like to grow into a constellation of spaces in Forest Park, Oak Park, Austin, etc.)

• the magazine: this is the newest bit, and still a bit inchoate. For my memoir, I was already thinking that I wasn’t sure I wanted to write a traditional book — I was wondering what it might look like as a quarterly magazine, sort of a cross between Martha Stewart Living and Granta. Glossy, beautiful photos, a year in the life, combining running for office, the tail end of cancer treatment, the house and garden and parenting and engaging in local politics, and of course, cooking.

Last week, I realized that it would be SO GREAT to extend that into a broader publication. I’ve been increasingly frustrated by how balkanized communications media are becoming, and at least locally, we’re really splitting demographically, with some people reading the print Wednesday Journal, some people mostly on FB groups (often very private ones), some people mostly auditory listeners, and the kids are on TikTok and SnapChat doing god knows what…

If we had a publication that showcased progressive voices and conversations, in a variety of areas (garden, food, schools, etc.) and if we could push it out in multiple media (a print version, an online version, a podcast, TikToks, etc.), maybe we’d have a chance at actually talking to each other, actually listening.

So often when I was running for office, I found that with something as simple as getting rid of fines at the library, people I talked to were initially resistant, but all they needed was for someone to actually present the argument to them, and then they realized that yes, doing this would actually align with their values. And we could afford it too.

That’s where my head is right now. I have a lot more specifics, but I think the next stage is a whole host of conversations. I’m going to want to shape this very carefully, if it’s to do what I hope it’ll do, and I’m going to need a lot of community input.

But I think my own memoir would be interesting in conversation with a broader community magazine, and the magazine would be in conversation with what we do at the makerspace, and as Serendib Press develops, Stephanie and Heather and Darius and Emmanuel and Julia are learning more and more about the publication process, so we’re getting into a better position to do this well.

So that’s where I am right now. I’m about to go out of town, and much of March is super-absorbed with travel and Feast launch events. But I’m going to be talking to people, local and otherwise, about all of this. We’ll see where it takes us.