These are pretty perfect. I love that I’ve found a good use for the off-cuts from the trays of passionfruit marshmallows, and the way they complement the tang of ruby chocolate? Mmm…. I did these with cashews before, which are tasty, but I love the tiny little edges of green contrasting the pink and white on the pistachios. The pink-green-white colors make it very tropical-Christmas appropriate, I think.

🙂 I didn’t really measure, so this is only an approximate recipe, but hopefully enough to give you a sense of it. 1. Melt ruby chocolate chips in a microwave at half power, stirring until liquid and smooth. 3. Spread on a sheet of parchment paper and let set (faster in the fridge). Cut into pieces, sprinkle with flake salt, and serve!

Spiced chocolates. Nothing fancy here — melt some dark chocolate chips at half power in the microwave, stir in cinnamon, cloves, and fresh-grated nutmeg (would’ve added ground cardamom if I had any on hand), pour into molds and leave in fridge to set. 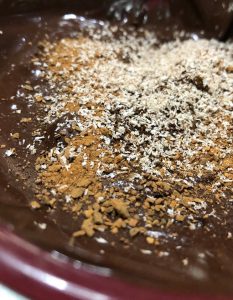 Definitely faster and much less labor-intensive than making them into individual truffles, though I’m not sure I love the shiny finish on these — it mars really easily, for one thing. But the little paisley shapes are v. cute, and sprinkling with flake salt is both delicious and camouflages any little imperfections. 🙂 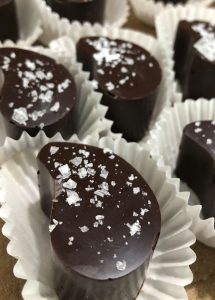 Kavya has a new favorite marshmallow! For a long time, passionfruit marshmallows topped her list, but yesterday, they were unseated unceremoniously by the flavor of the season. (I like these a lot, but passionfruit is still the queen of my heart.)

1. In a small pot on the stove, heat cider with cinnamon and cloves. Bring to a boil, turn down to a simmer, and simmer 10 minutes or so. Remove 1/2 c. for marshmallows, sieving out any whole spices; drink whatever remains. (Can be done in advance — in my case, I mulled a bigger pot of spiced cider to enjoy straight up on a cold day, and just set some aside for marshmallows.) 3. In a small saucepan (a bigger one will be heavy and hard to hold steadily at a later stage) combine water, sugar, corn syrup, and salt. Cover and cook over medium high heat for 4 minutes. Uncover and cook until the mixture reaches soft ball stage (240 degrees if you have a candy thermometer), approximately 8 minutes. Once the mixture reaches this temperature, immediately remove from heat; if it continues, it will swiftly turn into hard candy.

4. Turn mixer on low speed and, while running, slowly pour the sugar syrup down the side of the bowl into the gelatin mixture. (Be very careful with the sugar syrup, as it is scaldingly hot and will burn you badly if it gets on your skin.) Once you’ve added all of the syrup, increase the speed to high.

5. Continue to whip until the mixture becomes very thick and is lukewarm, approximately 12 minutes. Add food color if desired — if not, they’ll be white.

6. While it’s whipping, butter a large 9 x 12 pan. Prepare an oiled spatula. Pour the mixture into the prepared pan, spreading it evenly (and swiftly) with the oiled spatula. 8. Turn onto a board, cut into squares, and dust all sides of each marshmallow with the remaining powdered sugar, using additional if necessary. May be stored in an airtight container for up to 3 weeks, or frozen.

I’ll have to make this again so I can write it up into a proper recipe, but here are the marshmallow-rocky road experiments. I made three different varieties; the clear favorite was the ruby chocolate with passionfruit marshmallows and dried mango. Mmmm….so good! I served these at the Feast packing party, and they were quickly devoured by my hardy volunteers.

Rocky road is so simple to make, and great to use up leftover bits of nuts and fruit and mango. Melt chocolate on half power in microwave, stirring every 30 seconds after the first minute, so as to not burn it. When it’s melted, stir in whatever bits you like; you can keep adding until it’s mostly bits with a thin coating of chocolate. Spread on a sheet of parchment paper, stick in the fridge and let it cool. Snap apart (this part is fun) or cut into squares (which is cool for showing the cross-sections), and serve.

I wish the new ruby chocolate was more widely available; right now, I mostly have to order the bags of chips online, though sometimes I can find a bar in a grocery store. I love its fruity tang; I think it might be my favorite chocolate now.

The other versions were good too, but in retrospect, I think the dark chocolate + cashew version would’ve been better with a sprinkling of flake salt over the top, and possibly a bit of cayenne mixed in. Ditto salt on the ruby chocolate and cashew, though I wouldn’t use the cayenne for that.

I could barely taste the dried coconut in one batch of ruby chocolate rocky road, so not sure it’s worth adding unless you use more / bigger pieces. Ditto the candied ginger in the dark chocolate actually, which surprised me — just need more, I think. MOAR GINGER. Milk toffee, with and without cashews, done! Very satisfying, checking things off the checklist. This really is one of my favorite desserts ever — I’ve been nibbling off-cut crumbly bits for a solid week now, and I’m not bored with them yet. There’s something about the texture that’s particularly appealing; sort of halfway between fudge and maple candy. And while I was happy to make some without cashew for those who don’t like nuts (insert standard legal disclaimer that these are all made in a home kitchen and that I can’t guarantee anything I ship out is completely nut-free), the cashews really do make this sweet particularly luscious. The New Orleans praline version with pecans is also good, but I like our cashew version better.

When you go to pack up your milk toffee, and discover that one of the packets is open, and the baker’s dozen of pieces is now just a dozen…it has been a little torturous for Anand, I think, having so much milk toffee lying around, and I’m afraid he just cracked and snuck a piece. I would be annoyed, but I have a whole other tray to cut up today, so it’s fine — that one piece probably isn’t going to make or break me. It must be a little tricky, though, for kids who grow up in a bakery! A little more than halfway on the curry powder — 70 packets made out of 128!

(I know Stephanie was fretting about how we’d get it all done, but fear not!

Pistachio-rose marshmallows done, I think — I need 4 batches of 13, so I need to package them up and count to make sure I have enough. Think so! I may not be able to do too many more sweets today, as my right arm is getting tired from all the stirring & cutting. But I may be feeling rejuvenated by the time I take Kavi to her semi-final soccer game and come back…. 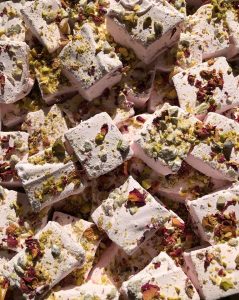 (Anand won his game this morning, so he’ll be going to the finals next week. He’s pretty excited, even though to be honest, he spends much of his time on the field trying to remember to actually keep his eye on the ball….) 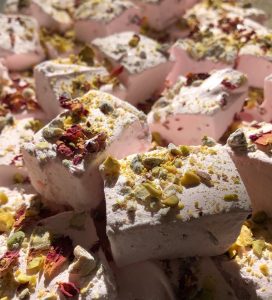 These pistachio-rose marshmallows really are the prettiest to photograph. Kavi says she likes them, but she likes the passionfruit much better. Fair enough — so do I.

🙂 But for a teatime display, these are hard to beat!

🙂 There are many Feast Kickstarter rewards in progress at the moment, which is like having a lot of little lights blinking in my brain. Every time I get to turn off a light….ah. Peace descends. Making progress on the mounds of milk toffee for Feast Kickstarter production, accompanied by interior design shows. That’s been most of today, with a few hours for soccer games.
Both kids’ teams won their quarter-final games (very little credit to my own kids in that, but hey, they participated), which means that, yay, we get to continue with two more games in the semi-finals tomorrow. It’s a good enforced break from cooking, though. Otherwise, my Type-A nature would likely have me buried under a massive pile of milk toffee by now… By Wednesday, I’m supposed to have 11 batches (each a baker’s dozen) of cashew milk toffee and 5 batches of cashew-free milk toffee, and then there’s the ‘candy assortment with and without cashews’ (another 14 batches), which may or may not have milk toffee in it…

…depending on how many marshmallows I have left over after I make the marshmallow batches (chai, honeyed with rosewater and saffron, pistachio-rose, tamarind-chili, and chocolate-dipped passionfruit). I’ve done the plain passionfruit, and am going to dip the chocolate passionfruit next, and then I think I’m calling it a night — tomorrow, there will be more. So much more.

Onwards, brave heart. At least the children are feeling well rewarded for their exploits on the soccer fields today, as they’re getting their fill of off-cuts (milk toffee for Anand, passionfruit marshmallows for Kavi….)

In theory, I’ve agreed to join Pooja Makhijani’s croissant-making challenge this weekend. She suggested I plan to laminate my dough on Saturday and shape and bake on Sunday.

That would’ve been wise, I’m sure, but yesterday I actually made two batches of passionfruit marshmallows and one of milk toffee, in preparation for shipping out Feast with Kickstarter goodies (also so I could take some milk toffee to Madhurima’s Diwali party last night, where it was honestly entirely unnecessary because she made a massive amount of delicious food including homemade chai and mango ice creams, and yes, I’ve told Kevin that he should seriously consider an ice cream maker for my Christmas present this year). Anyway, I am just now about to even look at the recipe Pooja sent me, so this is likely to be a disaster, esp. as I have never even attempted croissants before. But onwards unto the breach, dear friends! Disastrous croissants await.

(I mean, how bad could they be, really? With all that butter….)