When you invite your former student, now employee, to join in the socially-distanced potluck Thanksgiving, and he signs up to bring some eggplant salad and stuffed cabbage, which surprises you a little, because that seems pretty fancy cooking for a 23-year-old…

…but then it turns out that he’s living with his mom during shelter-in-place, and she loves to cook and feed people…

…and NOT ONLY does she send along sufficient portions of eggplant salad and stuffed cabbage, but she throws in a half-dozen containers of homemade Romanian sweets as well…

…AND a container of extra sweets AND a jar of pickled peppers for the host — well, that’s some karma coming back my way, my friends, and I will gladly take advantage.

Darius, what are those little pastry things with the cream and jam called? They are SO GOOD, I can’t stop eating them.

(Anand loves the cake, he says. Tell your mom.) 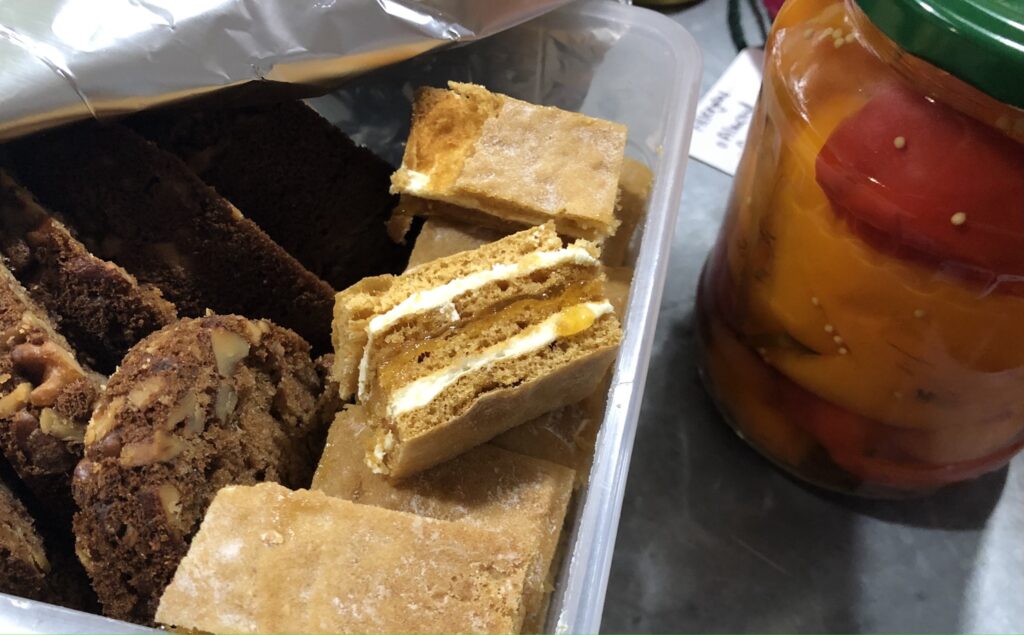 I do like a groaning board at the Thanksgiving table. 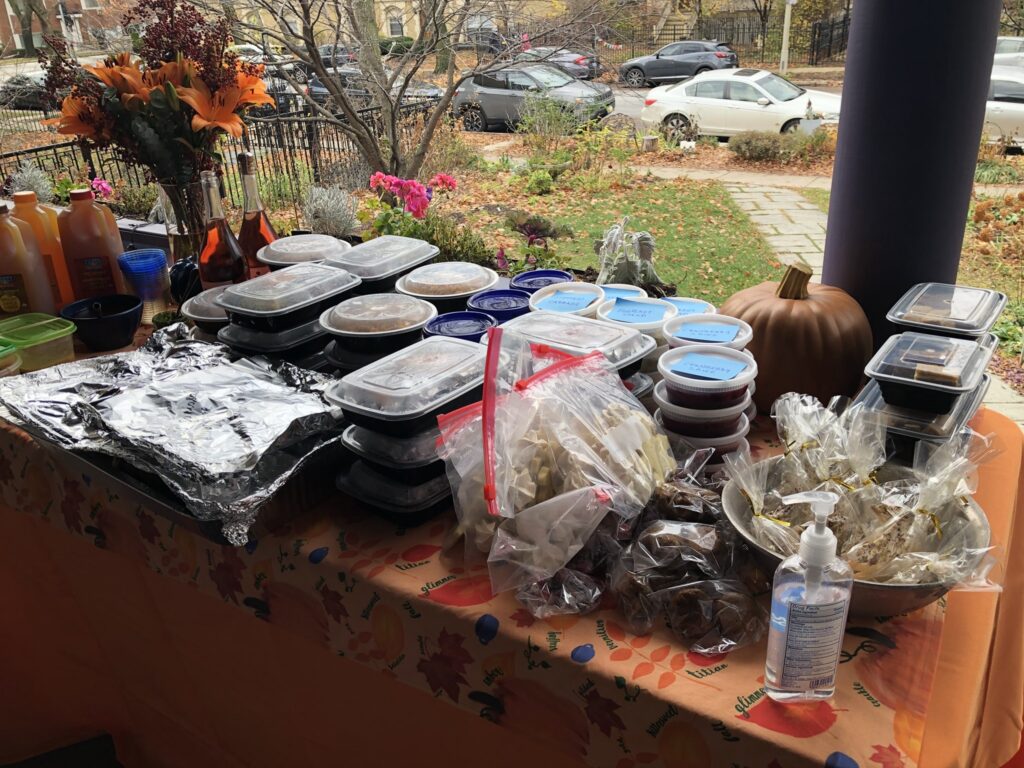 It took me a minute to figure out how to pack up the brussels sprouts and the cranberries in the containers I had on hand, but a little foil sufficed to separate them. 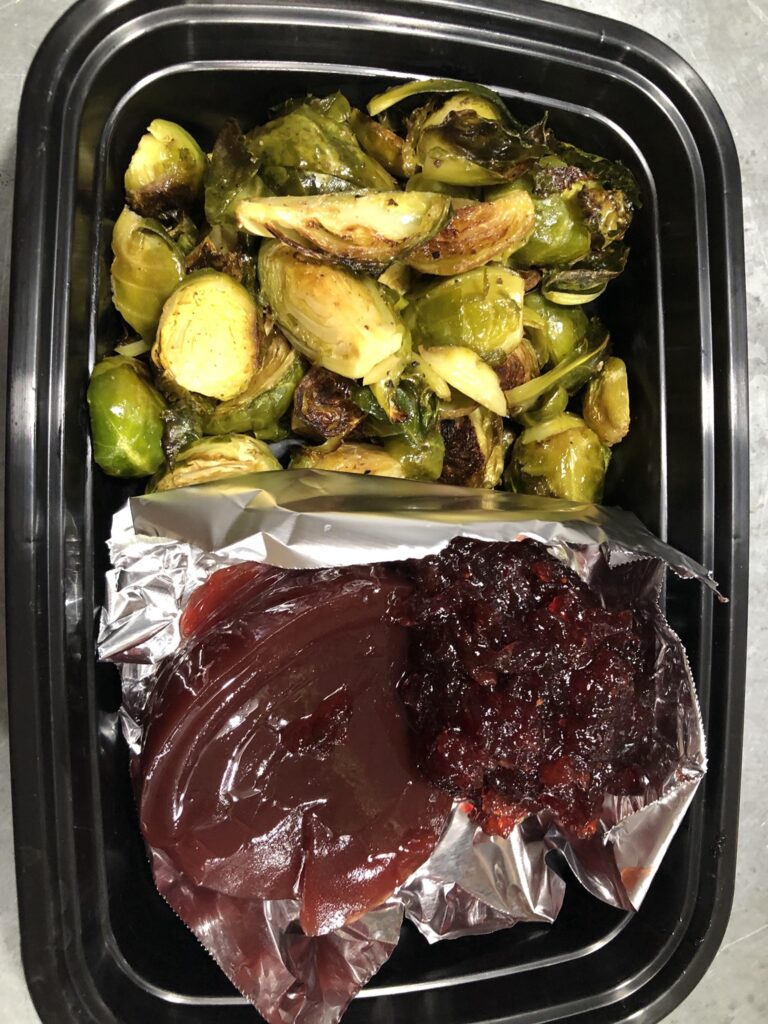 Brussels sprouts tossed with olive oil, salt, and pepper and in the oven, settling down to second breakfast and a little Outlander on the TV. Much ridiculous drama. 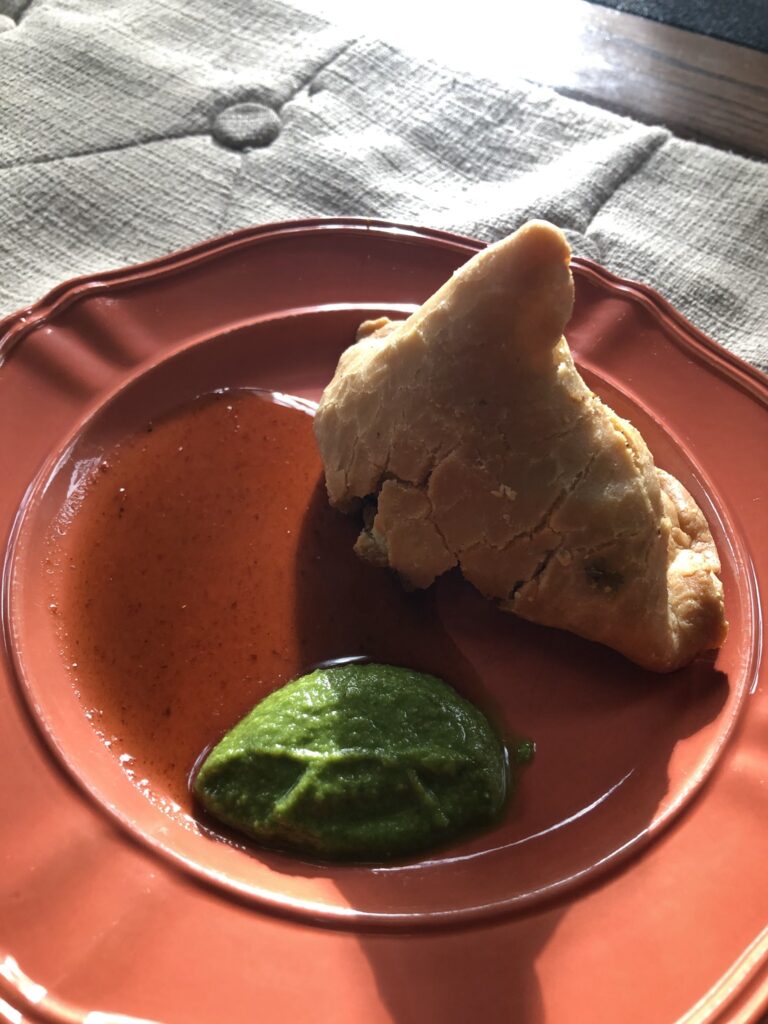 My first spatchcocked turkey — it does looks a little scandalous, somehow.

The thighs cooked a little fast — if I’d had more energy, I would have taken them off and let the rest finish. They were at 195F by the time the breast made it to 160F. So I think they may end up a little dry. But that said, fast and reasonably easy. 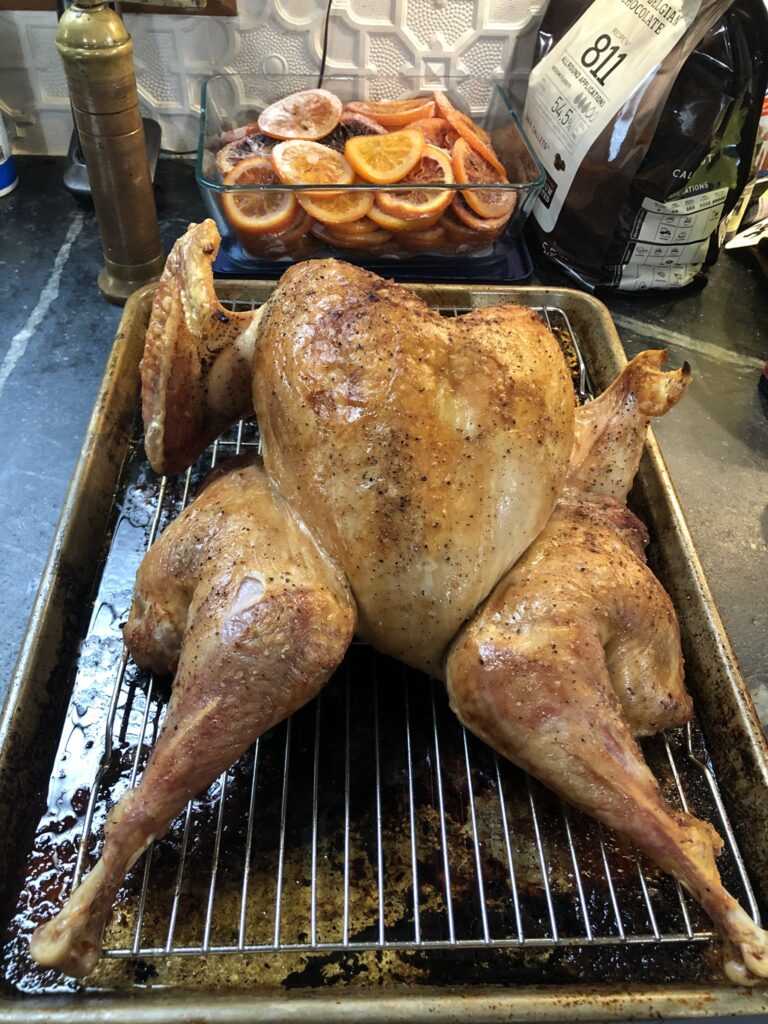 Have turned down turkey from 450 to 400, and set up the porch Thanksgiving table with Kavi’s tablecloth. I was pleased to find that our little grocery co-op had three different kinds of intriguing cider, so I hope friends stopping by will take the opportunity to experiment with their apple cider mimosas. And it’s not freezing outside, hooray — just autumnal! So pleased.

Next off to pick up samosas, then filling out petition sheets, so they’re ready for signatures.

Particularly in a year when so many have lost jobs due to failure of government, I’m acutely aware that we are among a fortunate few. More of our citizens (dare I say, all of them) should be well-supported enough to have the option of such service. 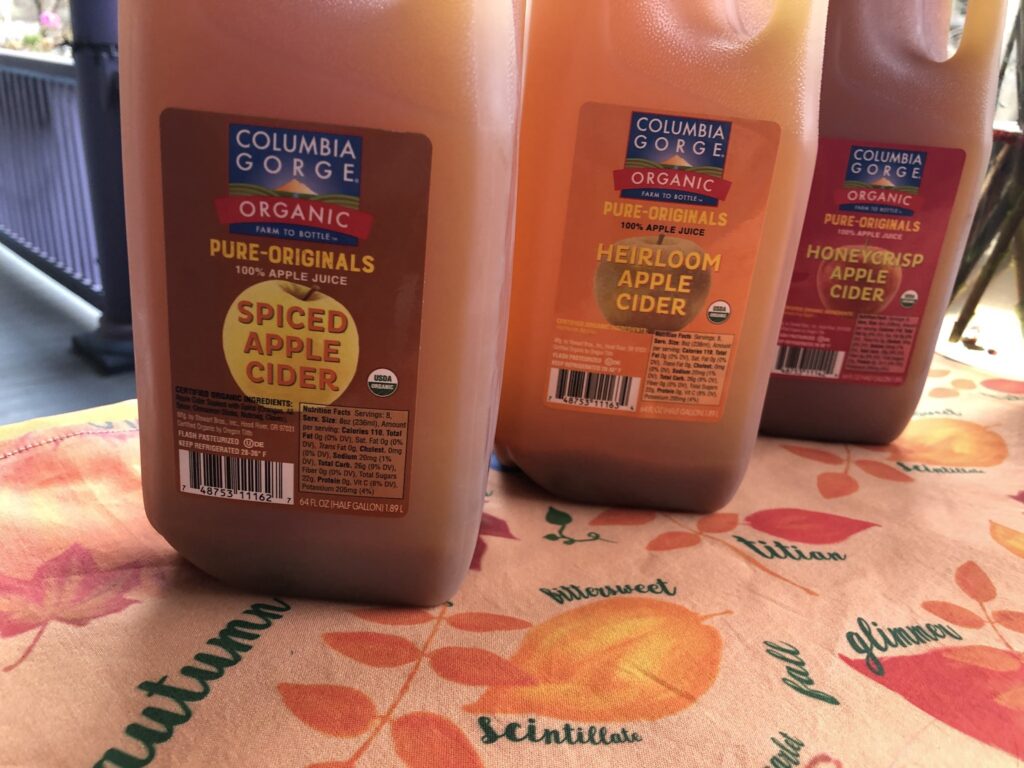 The turkey is out of the brine, rinsed, and losing a little of the fridge chill. I realized last night that I really had no reason not to spatchcock it, since we’re not gathering for a fancy in-person table. That saved me a couple hours of cooking time and will cook it better anyway, so I got to sleep in, which was nice.

I’ve never actually spatchcocked before, so this will be a learning experience. Stuffing & coffee for breakfast. Perfect. Then, a little internet researching on spatchcocking. 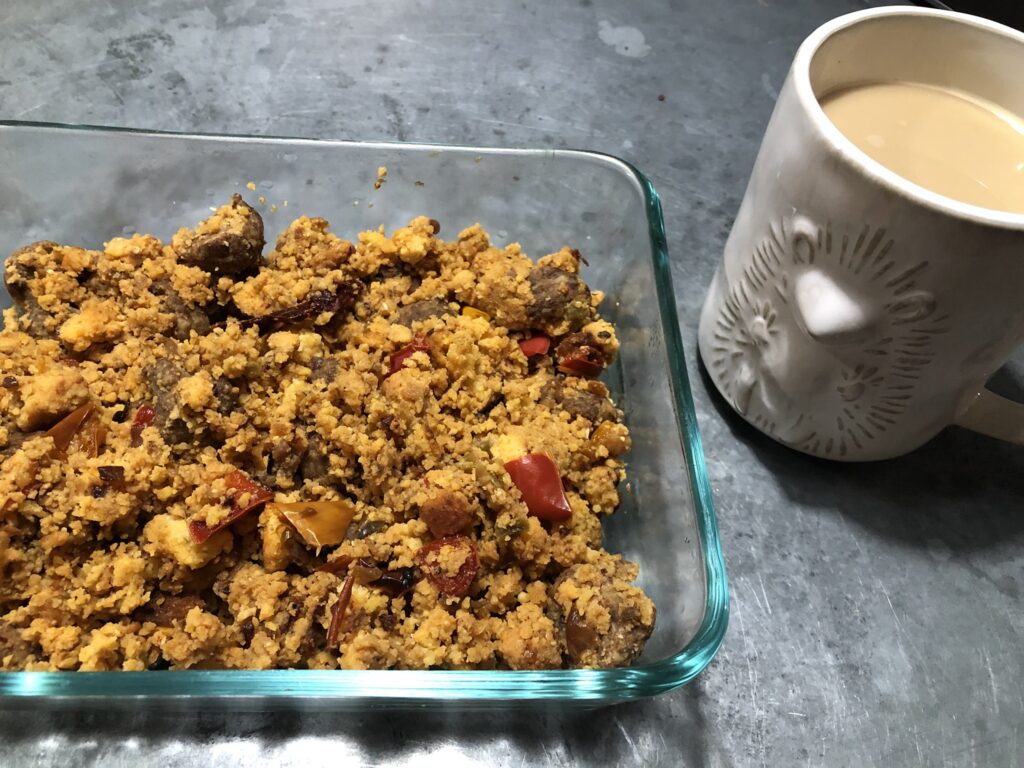 Part of why I love this stuffing, I admit, is because with the bell peppers and cornbread, the colors are so Thanksgiving-y.

The other part is the taste, of course; I only make it once a year, because I tend to eat rather a lot of it when it’s around. Very satisfying packing it up for tomorrow’s porch pick-up.

Our socially-distanced Trunksgiving is coming along nicely — cranberry sauce made, canned cranberry jelly purchased (I like both, and figure others do too), and this sausage-cornbread-chipotle stuffing is all ready to go, with a few portions of rich corn cake too in case two vegetarian friends swing by.

Turkey is brining, will stick it in the oven tomorrow morning at 6 (and possibly go right back to sleep), so it should be done by 10, in plenty of time for carving and gravy-making before people come by between 11 and 1 to pick up their portions.

Kevin and Kavi are going to prep some brussels sprouts for me tonight; I’ll roast them in the morning, so they don’t risk getting soggy in the fridge.

And I did pick up some mushrooms, so if I feel motivated in the morning, I may add in a mushroom stuffing — I love it, but no one else in the house eats it (fools!), so I only make it when I can pass some on to others.

Plus I packed up some dragon cookies just because, although I admit, they’re the ones that I forgot to emboss before baking, so ‘seconds,’ but still tasty.

Five others households are participating in this potluck, and will be contributing ham and mashed potatoes and mac-and-cheese and stuffed cabbage and eggplant salad and barley casserole and lemon bars and gingerbread and sugared cranberries. So we probably won’t be cooking for a few days after this.

In the morning, I’ll pick up 30 samosas with chutneys from Wise Cafe (want to support local restaurants in this difficult time, and their samosas are delicious), and set them out on the porch with apple cider mimosa fixings, so people can help themselves when they stop by to collect their portions. There’s going to be a Thanksgiving tablecloth on the porch table too, by golly, AND flowers.

I almost didn’t have the energy to organize this, but I’m glad I managed it; it makes me so goofy happy, checking things off the list, portioning this stuff out, filling my fridge. It’s ridiculous how essential feeding people in a feast-y manner is to my sense of self. 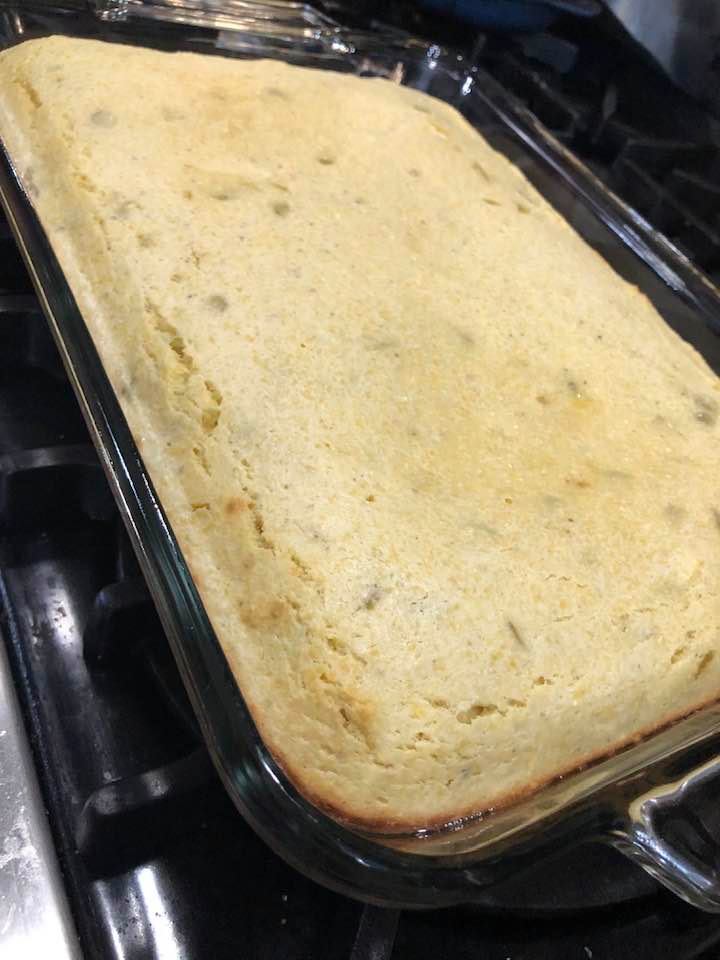 Store was out of fresh green chilies, so I had to use canned — should be fine, but feels oddly unnerving experimenting with my standby Thanksgiving stuffing! 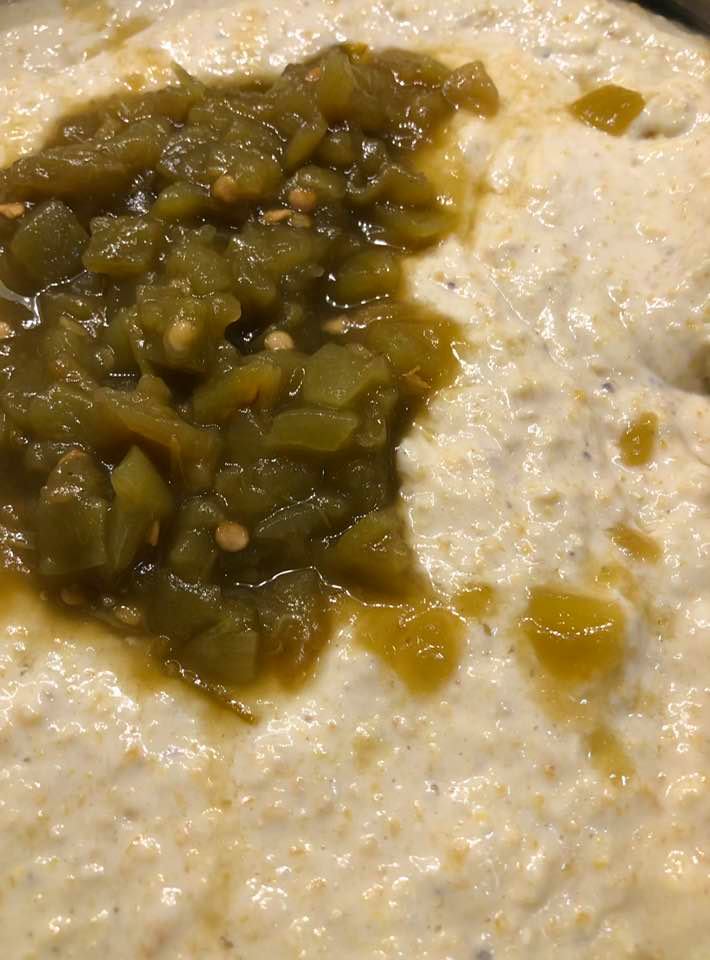