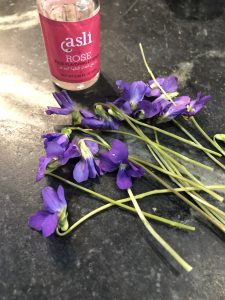 Hm. This batch of sugared violets did not work great. I picked a bunch of lawn violets — all I had, which wasn’t very many. And then I tried the dip in sugar syrup, put on wax paper, sprinkle with caster sugar method of sugaring them.

The problem is that the clump up as soon as they get wet, and then all the pretty definition is lost. Maybe you could separate it with tweezers, but I think they’d likely tear badly if you tried? I didn’t have the patience for it. So I have clumpy sugared violets — I have one idea for a recipe that they’ll probably work okay in, but it wasn’t what I intended. Bah. 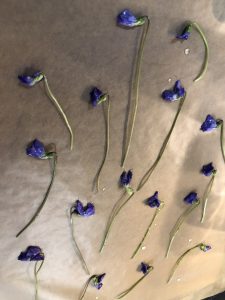 The other method is more time-consuming, and involves using a paint brush to brush them with egg wash and they sprinkling sugar on them — I think that would likely work better to maintain the flower’s appearance. Next time I have violets, I guess I’ll try that — but I’m all out now, so I suppose it will have to wait ’til next year. 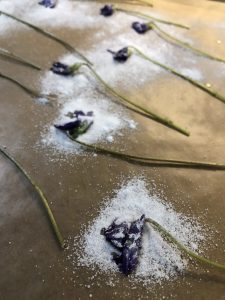 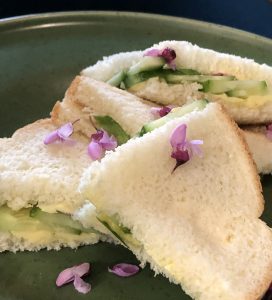 Fairy food! I had a redbud for a few years, but I didn’t realize the flowers were edible. Once someone told me they were, I had to try experimenting. (We’ve kept our garden pesticide-free for ten years now, which makes it much easier to eat out of it!)

To be honest, I find that the flowers, like most, have almost no flavor — if I eat them on their own, I can taste a very faint sweetness, slightly nutty. But put them in a cucumber sandwich, and you have a teatime treat to brighten any fairy’s heart! 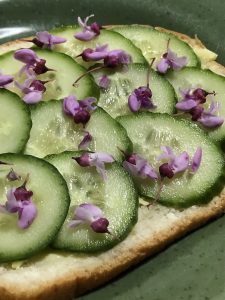 My daughter was a little suspicious — ‘flowers aren’t for eating!’ But I convinced her to try, and she admitted that the cucumber sandwiches were quite yummy. Of course, I think she mostly likes the butter… 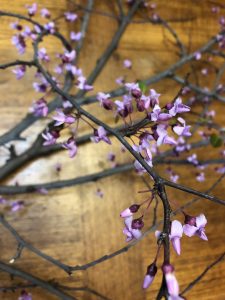 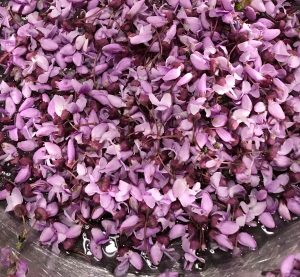 On the one hand, it was actually lovely, after a few days of grocery store hot-bar meals because the end of semester is too frantic for cooking, to be cooking again. I was just dry-roasting curry powder ingredients, nothing fancy, but between the scent of the spices and the sandalwood I burned earlier in the writing shed, I felt like I was coming home to myself. 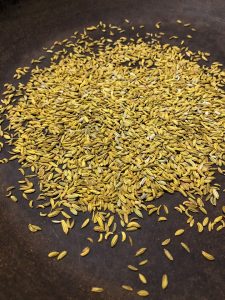 On the other hand, I was still so tired that I somehow put the glass jar down too hard on the shelf, and it cracked a piece off, and suddenly I had coriander seed spilling out voluminously onto the counter, my cupped hand — it took a second before I even really believed I’d managed to break the jar.

I was tired enough that I just gave up and went to bed — not quite to sleep, actually, because I owed George a pitch for a Wild Cards story, which I’d started in the shed earlier, and I wanted to finish it before sleep. Which I did, though my eyes kept closing as I tried to write the last sentences — hope he likes it. My new protagonist, Jesús “Retazos” Sanchez, is a general contractor who can mend things — his patches don’t last for very long, but they’ll hold for a bit, until he hopefully has a chance to do the job properly. It’s a very tiny little superpower, generated in brainstorming with my father-in-law; I like it.

I owe George another pitch, which I’ll hopefully have some time to finish writing up today. Also owe Marco an expanded pitch. And then back to finalizing revisions on the SF novel that used to be Flight. It’s actually really close to done, I think, has been for months — just need time to sit and write it. Summer is coming, and there will be much writing.

Anyway, this morning, I woke up sore from all the gardening I did yesterday, but sore in a good way. I’ve added a bunch of natives to my garden — they don’t look like much right now, but hopefully they’ll settle in and thrive, bringing more pollinators to the garden. The coffee is kicking in, so in a minute I’ll get up and actually clean up the glass + coriander mess.

Then I get to roast curry powder spices all over again. Not because there’s glass in what I did — thankfully, that accident happened far away from the roasted spices I had been working with. (Though I’m going to have to throw away a good cup of coriander seeds, which is a sadness.) No, I was tired enough that I was sort of on autopilot, and as I roasted seeds individually, I threw them all into one big pot for grinding — which is *not* what I need today. 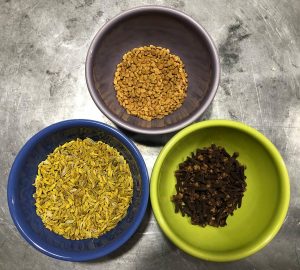 I’m staffing the South Asian group table at Julian middle school’s ethnic festival today, and I promised to do a spice grinding demo, and for that, I usually put out a set of little jars with the spices individually pre-roasted, and let the kids / adults measure out the spices into the grinder and grind them. I could just let them grind the mixed spices, but the measuring is more fun for them. I suppose I’ll bring the mixed stuff in a bag too, as back-up — sometimes I run low, if things are busy.

It’s a slightly complicated day, because Kavi also has a soccer game, and is then joining me at the table for a few hours, and is then going to a sleepover, and eventually coming home tomorrow, but tomorrow is also a Maram day of cooking and art at my house, so I need to remember to pick up some plastic tablecloths this afternoon to protect tables for one of the art projects, and there are probably some other things I’m forgetting right now. Find the name tags and photo permission stickers. Bring the projector and screen up from the basement. Make a list, Mary Anne. Lists are helpful.

Monday. Monday I sleep all day. That’ll be nice.