Kavi, who’s been a little sick for a few days: Do we have any chocolate?
Me, dubiously: We have chocolate chips.
Kavi, pathetically: Anything more dessert-y?
Me, thinking: How does chocolate pudding sound?
Kavi, cheerfully: I haven’t had chocolate pudding in forever. That sounds great.
Me, a gleam in my eye: Give me a few minutes.

(Instant vanilla pudding we happened to have on hand, cooked on the stovetop with chocolate chips melted in, chilled in our fanciest gold-flecked dessert bowl, with gold candies scattered over, graced with graham crackers…)

I am happy to inform you that milady was pleased with the offering; there will be no chastisement in the kitchens tonight. 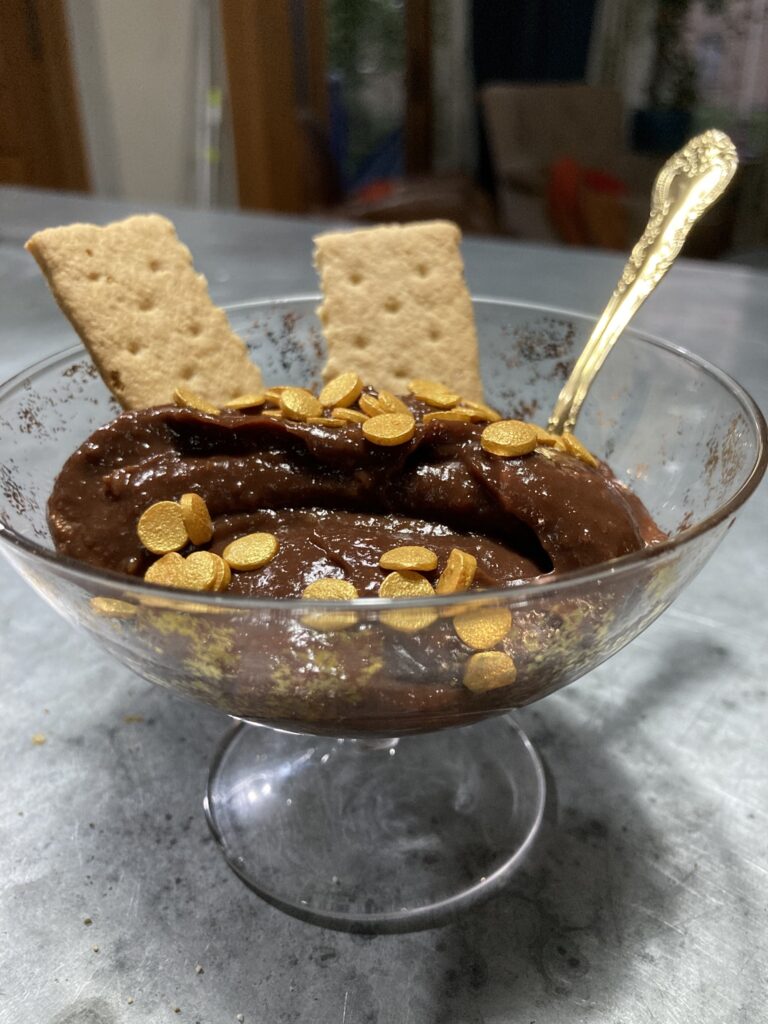 I’m really grateful that at this point in my life I have guerrilla cooking skills, because they are really helpful in times of exhaustion. Example — meals for this week:

– I took a pork shoulder out of the deep freeze and stuck it in the fridge, planning to cook it the next day — maybe vindaloo or tamarind pork curry?

– I was too tired to cook the next day; we ordered Indian takeout instead. Indian, because I was still planning to cook the pork soon, and so I figured any leftovers would go with

– the saag paneer that came with the Indian food was blander than usual — Kevin and I ate about a fifth of it, but without joy. I knew I’d want to add flavor before eating any again.

– the cilantro chutney that came with our samosas was thin and watery — it had some flavor, but needed more intensity and less wateriness

– next day, still too tired to cook from scratch. But hey — I heated some oil and cayenne in a big pot, took the pork shoulder and put it in, searing it (turning to sear both sides), and then dumped in the saag paneer and also the cilantro chutney and also some salt. Added some water, brought it to a boil, then covered and turned down to medium. Went to basement to chill out with TV for a while.

– eventually wandered back up, flipped pork over, gave everything a stir, tasted the sauce. Delicious. Added in the leftover devilled potato curry from the other day, turned heat down to medium low. Let it all cook another hour while I watched TV, checking periodically to make sure the liquid didn’t cook off too much.

– checked pork temp with thermometer — all good. Removed pork from sauce, sliced it up, and rinsed a few slices for the kids (too spicy for Anand otherwise, and I wasn’t sure Kavi would go for the saag sauce), Kevin and I had it straight up with naan / rice, pouring sauce over.

– next day, needed chickpea water for vegan love cake experiment. So had to open can of chickpeas. Perfect — added chickpeas to remaining sauce and simmered for 15-20 minutes. Delicious straight up with rice / naan, also good with pork slices added in.

Somewhere in there, I also pan-fried some chopped up chicken thighs with salt and pepper, added the restaurant tikka masala sauce, along with the tamarind sauce that came with their samosas. Yummy.

And so it goes around here. Nothing wasted, everything delicious.

Nice to wake up before the rest of the family, come down and see love cake waiting for me on the counter. Easy breakfast, lovely with coffee or tea. 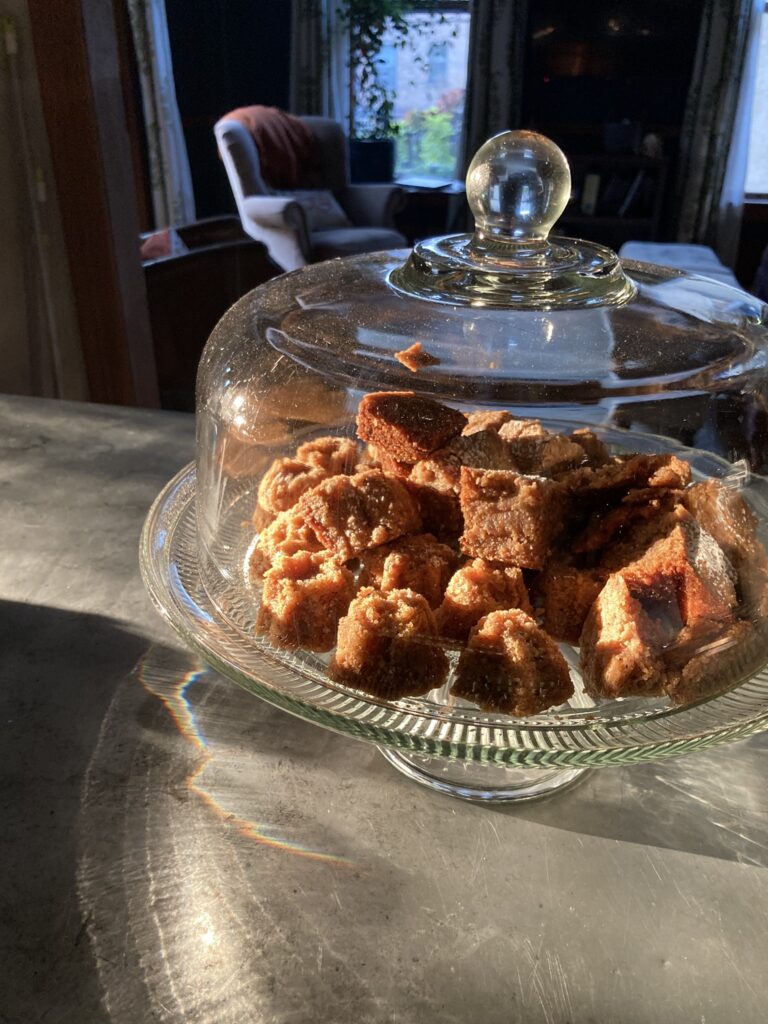 So it turns out that this vegan version of love cake takes a little longer to bake to brown up, but otherwise, it seems to work just fine! I’m happy with the texture, which is the important thing that was worrying me.

I want to try another variation (using egg replacer instead of bananas & aquafaba) before I settle on something final for the cookbook, but this is totally acceptable. It’s a little bit like a cross between banana bread and love cake. Interesting!

Fun cooking class yesterday for Sugar Beet Food Co-op. We’d originally planned to do a spice grinding demo there in spring of 2020, but had to cancel due to the pandemic; I’m glad they’ve found an alternative approach for now. They have a whole series of Zoom food and beverage classes going, so locals, check them out!

SugarBeet picked two vegan recipes out of Feast of Serendib, devilled potatoes and green bean varai, and put together recipe ingredient kits for the participants — $20 each, which is a pretty fabulous deal for a one-hour class + enough food to feed at least two people.

I like this format a lot, it’s great for the participants! And I’m very happy to support our local grocery store co-op; Kevin and I are members.

Lovely to be able to stop by on our way back from work and pick up some yummy farm fresh goodies for dinner.

Several people didn’t see the announcement in time, or had a conflict yesterday, so I’ll reach to Sugar Beet to see if they want to do another one at some point. If you’re a local and interested, drop your name in the comments here, and I’ll let you know if it happens again. 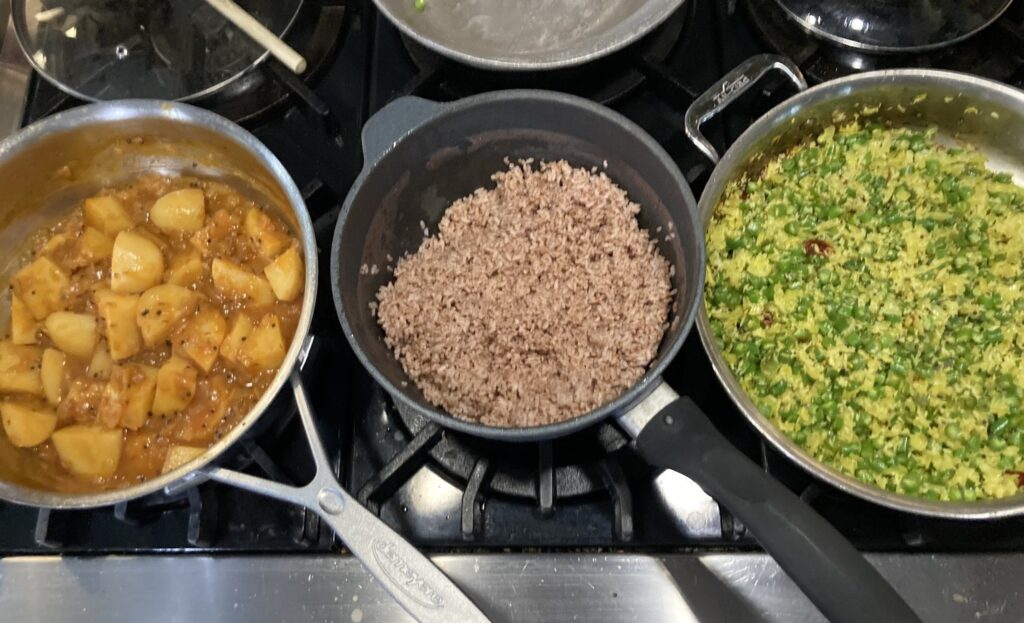 Roshani came by with a plan to make uppuma for lunch — she had brought over some shrimp curry too, along with some delectably sweet cherry tomatoes from her garden. That would have been plenty, but I had these fabulous duck eggs that a local gardener brought me in thanks for letting her dig up some goldenrod and morningstar sedge. So this seemed like the perfect occasion to use them.

I’ve never had duck eggs before — these were very pretty, and on researching, I learned that they’re basically like chicken eggs, but a little larger and yummier. Well, yummier if you like rich and creamy egg yolks, which I absolutely do. They’re often pickled in Asian cuisine, and I’m curious about that, but I was too impatient to wait three weeks for pickling. So curry it was.

I hard-boiled the duck eggs first, then just made my standard salmon curry (pulling out some wild salmon from the freezer and thawing enough to cut it), and then slipped in the hard-boiled duck eggs. Reader, they were so yummy. I’m honestly a little cranky now that they’re not easily available in grocery stores around here. Quail eggs, I know where to find. Duck eggs, not so much (unless I want to go to the Asian market and get them pickled…).

I am *not* starting a duck pond in the backyard. Not this year, anyway. Get thee behind me, Satan. I haven’t had time to keep up with the garden I do have, much less adding more living creatures to it.

But oh, they were DELICIOUS.