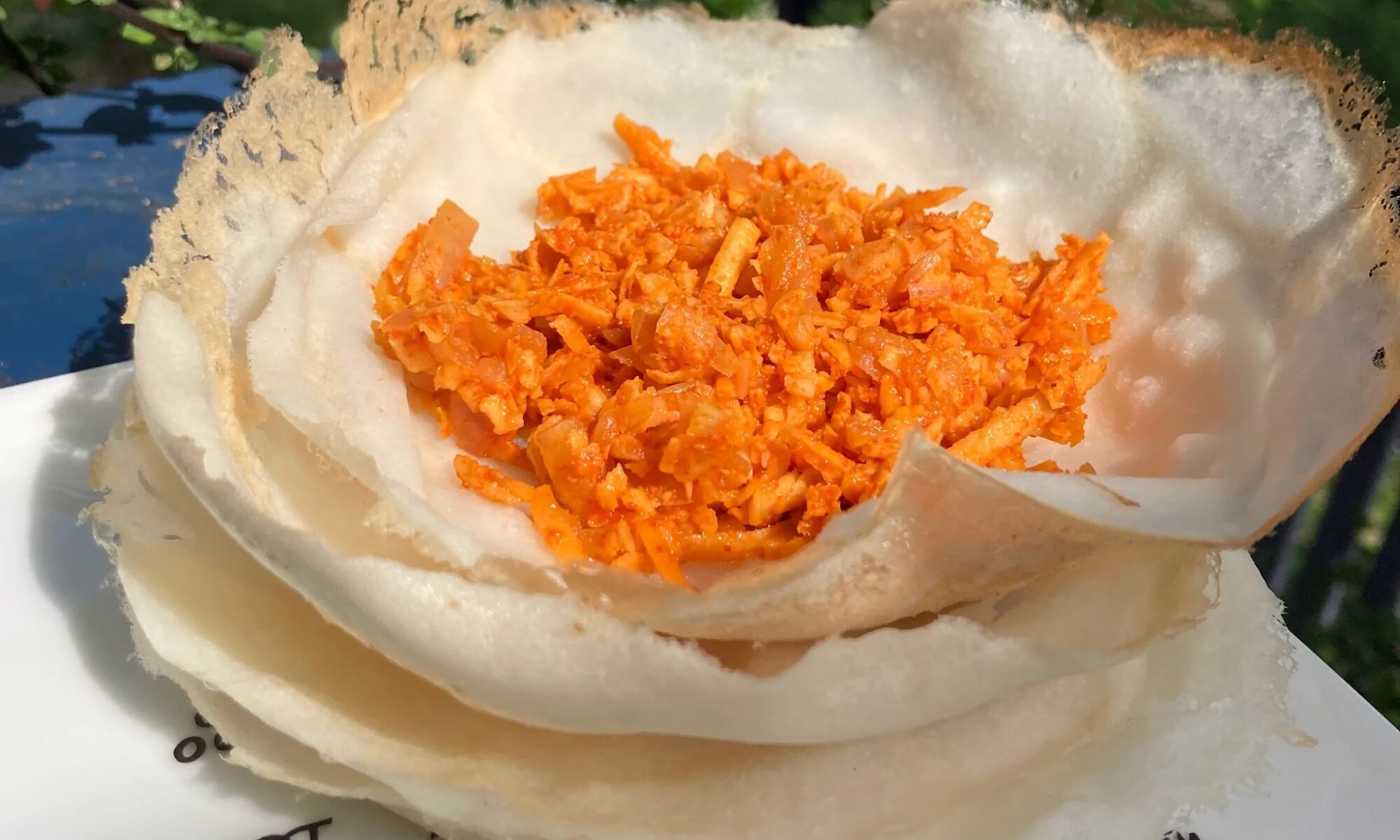 Cooking with Mary Anne! Learn how to make a classic Sri Lankan brunch of hoppers (with both egg hopper and sweet coconut hopper variations), along with coconut (pol) sambol accompaniment. Served with an accompanying fish or jackfruit curry, and mango-passionfruit mimosas. 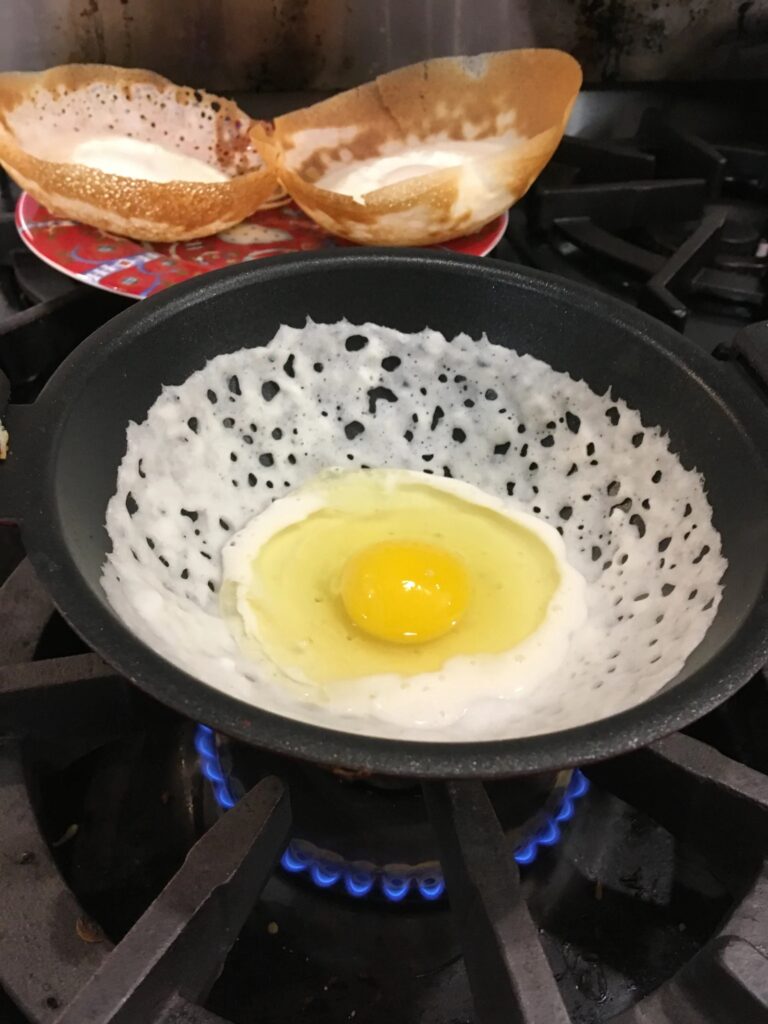 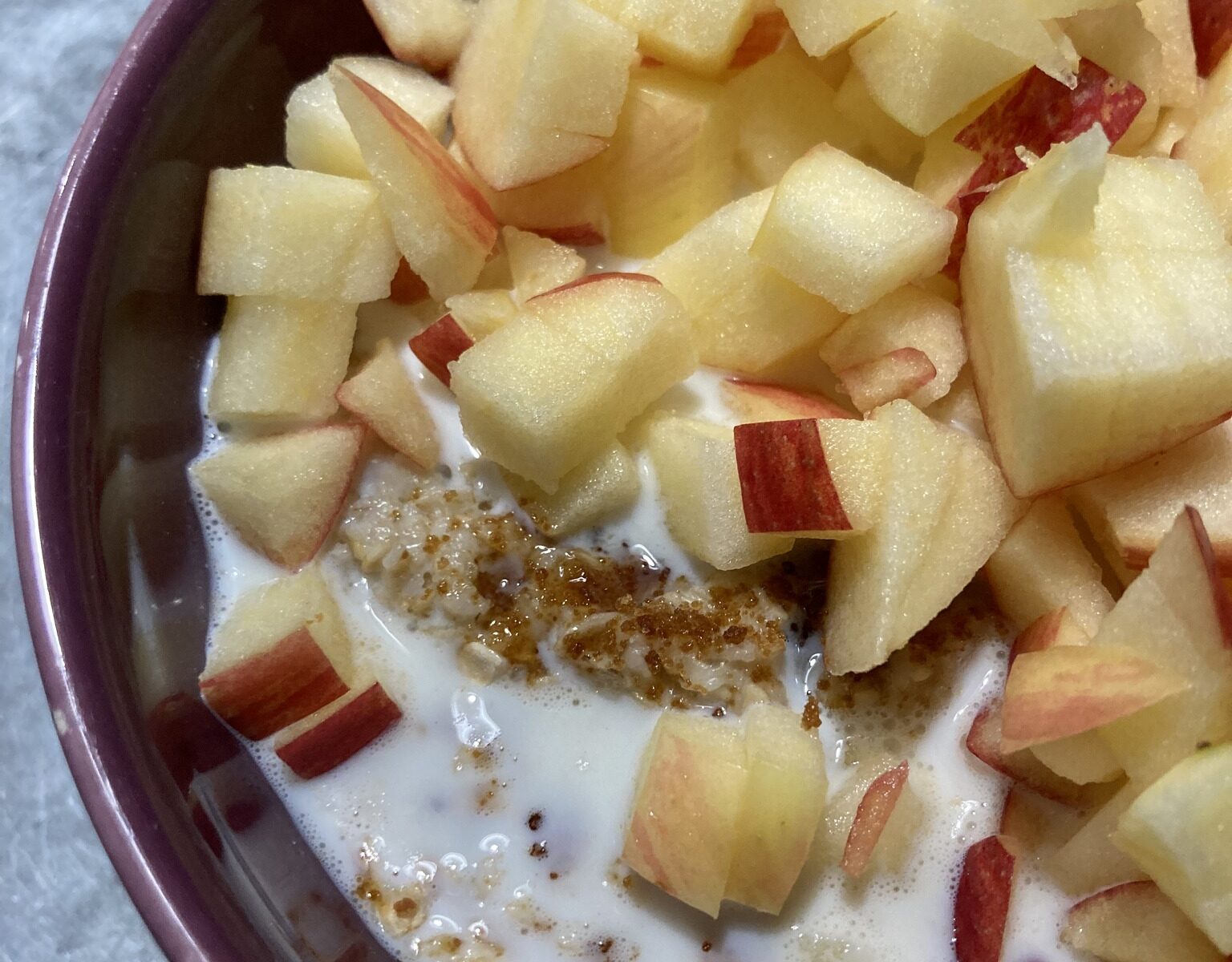 Between start of semester, ChiCon, eldercare, and catching a bad cold, I haven’t had time or energy for knitting in a while, especially something that takes as much concentration as this pattern. Nice to come back to it. Breathing in that crisp fall air… 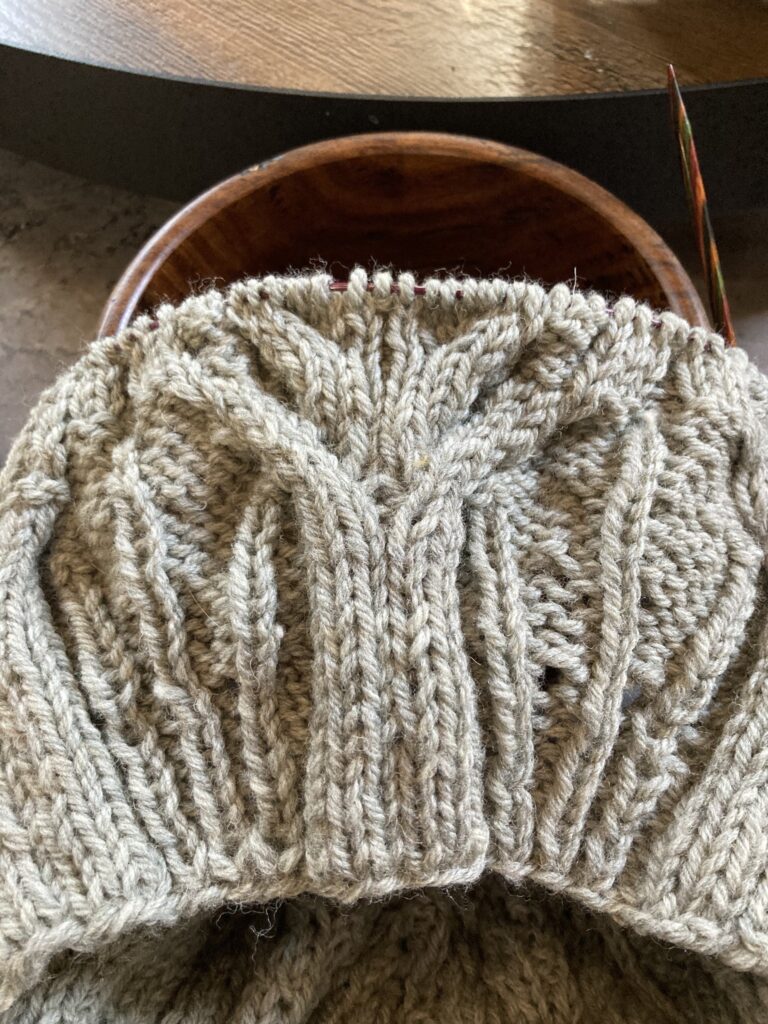 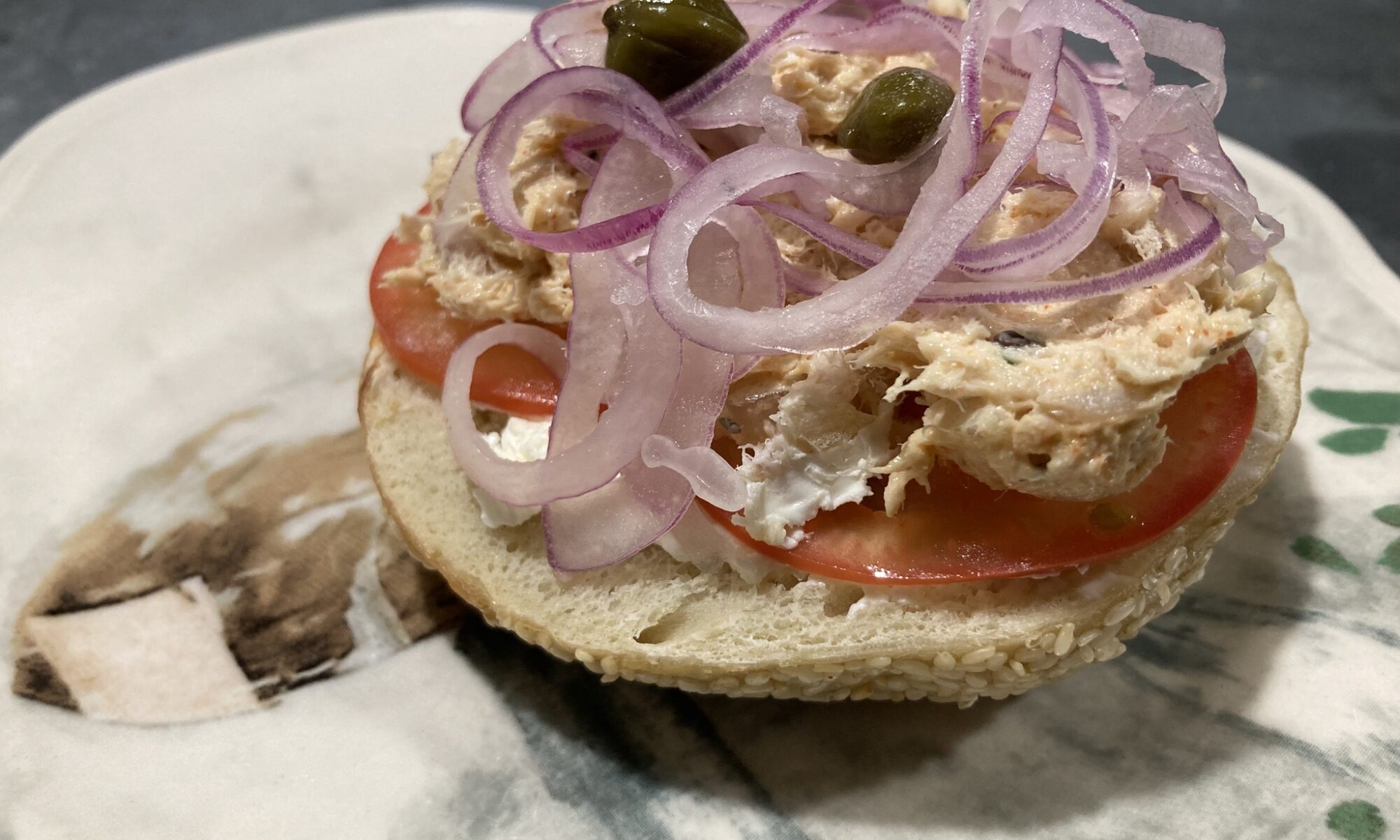 I stopped in at new Fritzi’s Delicatessen on Oak Park Ave., and asked the nice young person behind the counter to recommend some things. I tried everything he recommended:

Of these, my favorite was the knish, which isn’t surprising, since that was the main thing I was excited about getting — I used to get knishes at a deli when I worked downtown, and I’ve missed them. I had really wanted the meat knish, but it was sold out — need to get there earlier in the day than 4:30 p.m., apparently! The potato knish was crisp on the outside, soft and flavorful on the inside — I was going to split it with Kevin, but I apologetically ended up eating the whole thing myself.

The beef short ribs were also very good, tasty and tender. I personally would’ve liked even more pomegranate in it, but I really like the fruit & meat combo, and I suspect this is a better level of that for most people.

Kevin enjoyed his pastrami sandwich, though he thought the challah was an odd choice for it — they did also include some slices of what I think is rye, though I’m not sure what that came with. I tried a bit of the pastrami, and thought it was yummy, though I’m not a pastrami connoisseur.

I was a little surprised by the latke, which I didn’t order — not sure if it typically comes complimentary with the pastrami sandwich, or if they just threw it in. I was a little sad that there wasn’t applesauce for the latke, but I suppose I shouldn’t look a gift latke in the mouth. I do like applesauce with my latkes, though. (Editing to note that yes, they did provide sour cream for the latkes, but I prefer applesauce, and previously when I’ve ordered latkes, they’ve included both.)

The matzoh ball soup, I have a question about, I suppose. The broth was quite salty, and the matzoh balls seemed mostly not salted. So together, they made a reasonably flavored bite, but is that typical? Personally, I would’ve pulled back on the salt in the broth and added a little bit to the matzoh balls, but I am not Jewish, and I don’t want to stomp on tradition here…

The sweet blini also surprised me, because while it was mild, it didn’t seem very sweet. I almost wanted to drizzle honey over it. Is it meant to be actually sweet? I haven’t had blinis enough to be able to comment on that.

In any case, I feel like I’m quibbling — overall, I think this is a great addition to the neighborhood, and I do plan to stop back sometime soon, earlier in the day, to try that meat knish! They have lots of seating, so while I got takeout, you can certainly enjoy a nice family meal inside. I arrived in between the lunch and dinner rush, but it was starting to fill up as I left.

Is it too early to wish folks a happy Rosh Hashanah? I think it starts at sundown tonight, or possibly tomorrow?

May the coming year be filled with peace, health and prosperity for you and your loved ones! 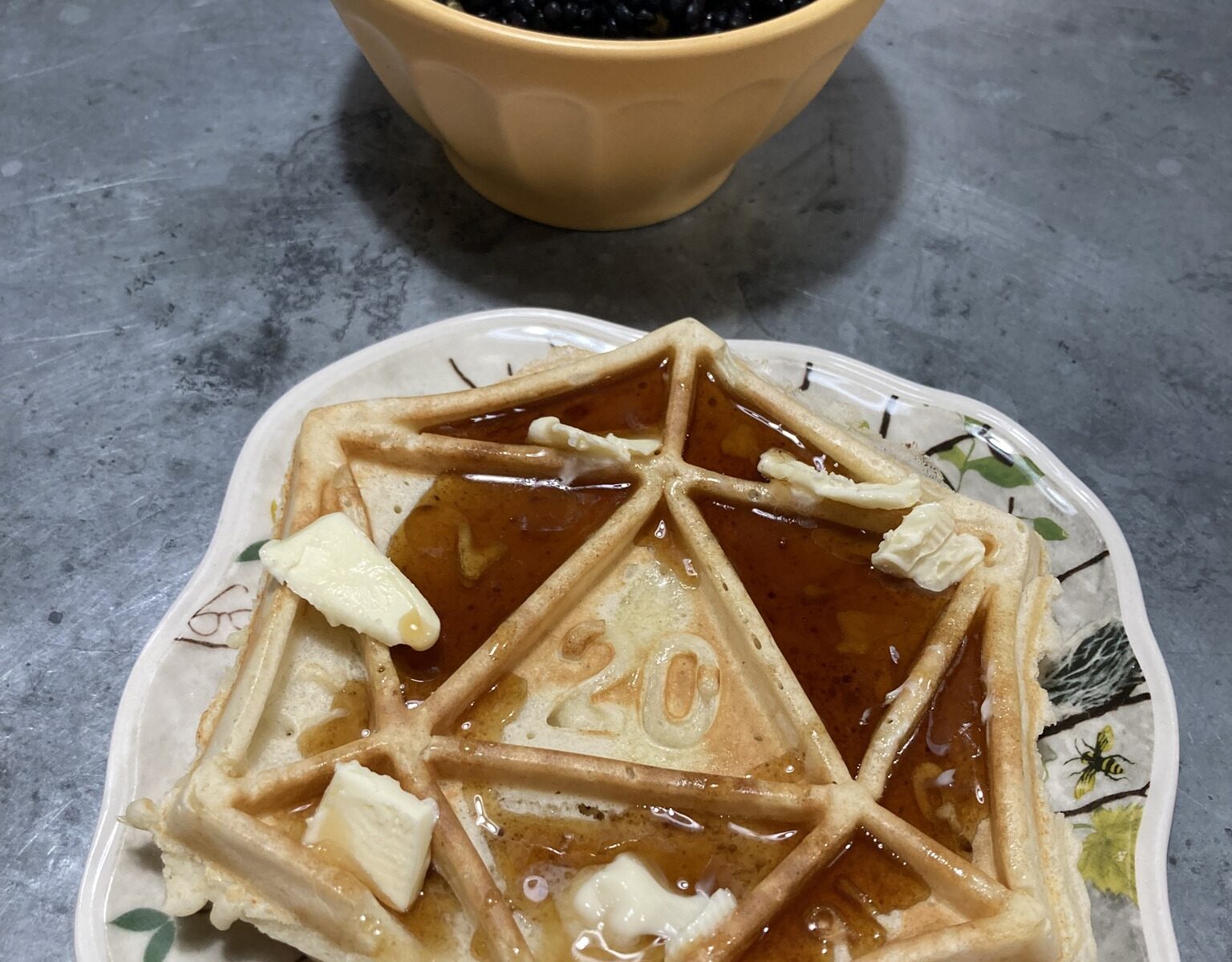 Today for Anand’s birthday weekend, I’ve promised to run a small D&D-style one-shot game for him. A couple of friends are coming over later today, so I need to go find some character sheets to download and remind myself how to roll up characters. But I thought it was appropriate to start the day off with D20 waffles… 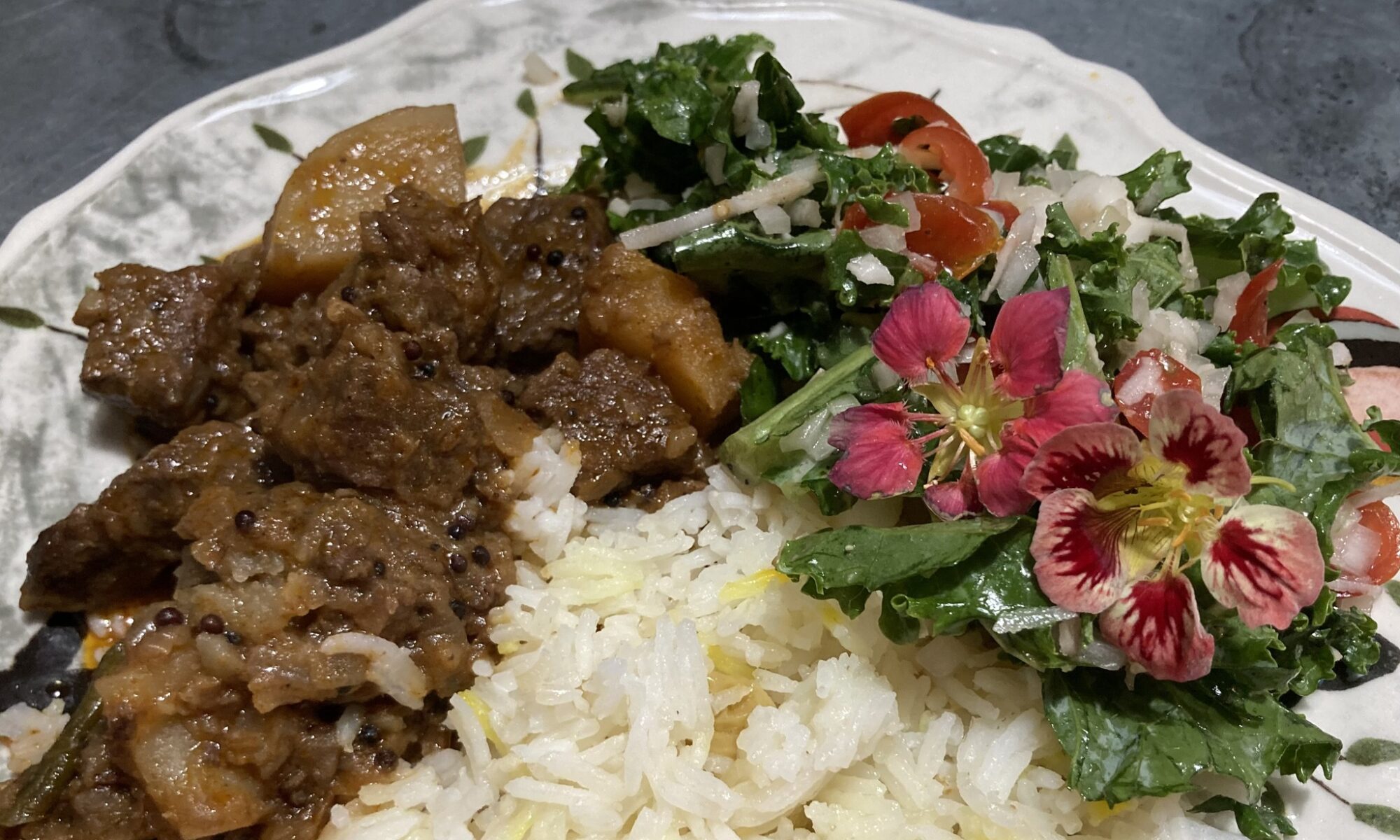 Technically, nasturtiums aren’t classically part of Sri Lankan kale sambol, but I grew these from seed, so I added them, and they’re so pretty and edible and why the heck not? 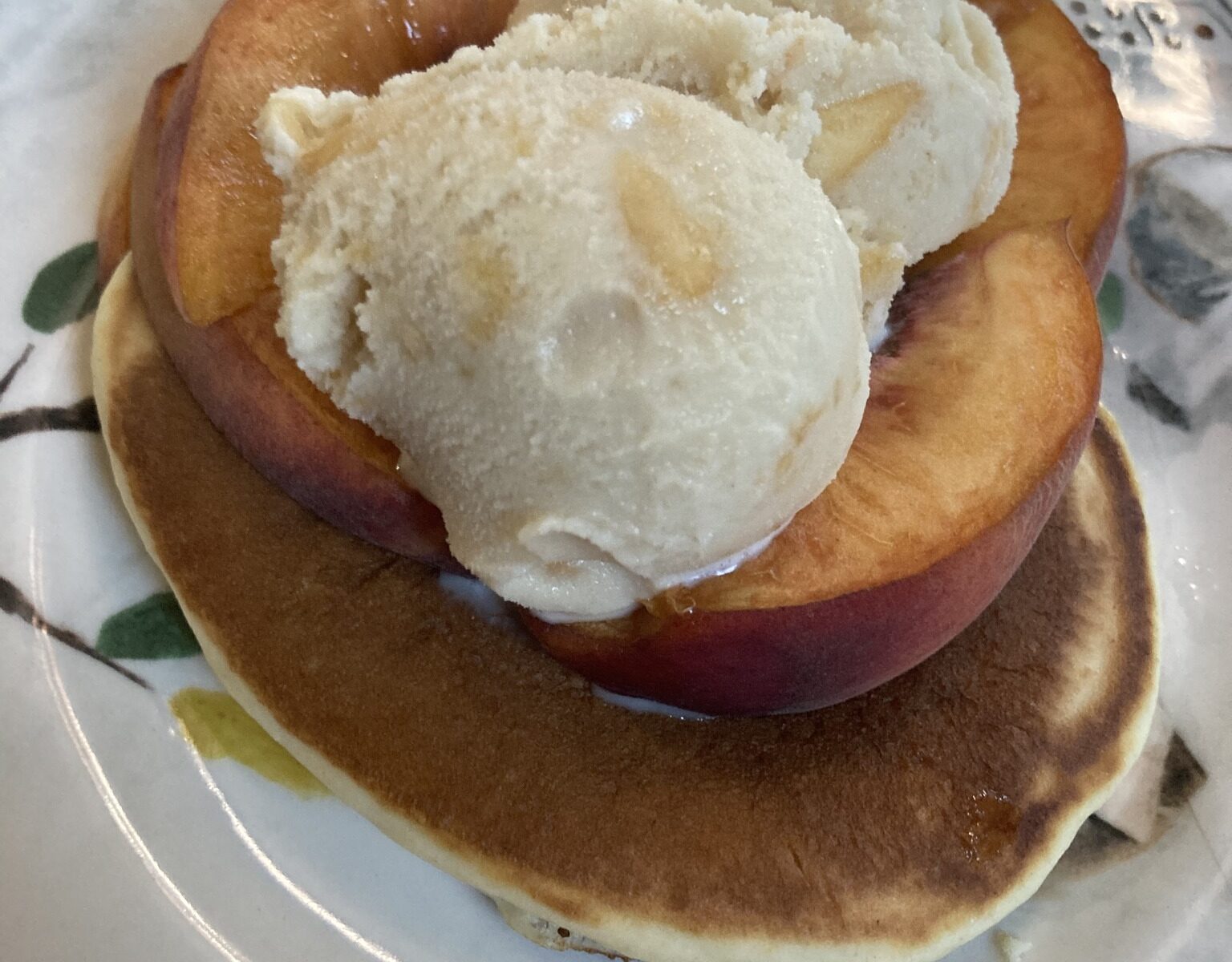 When you’ve had a long day, and you realize you have homemade peach ice cream, and slightly over-ripe peaches, and leftover pancakes, and that’s basically a fabulous impromptu cake. 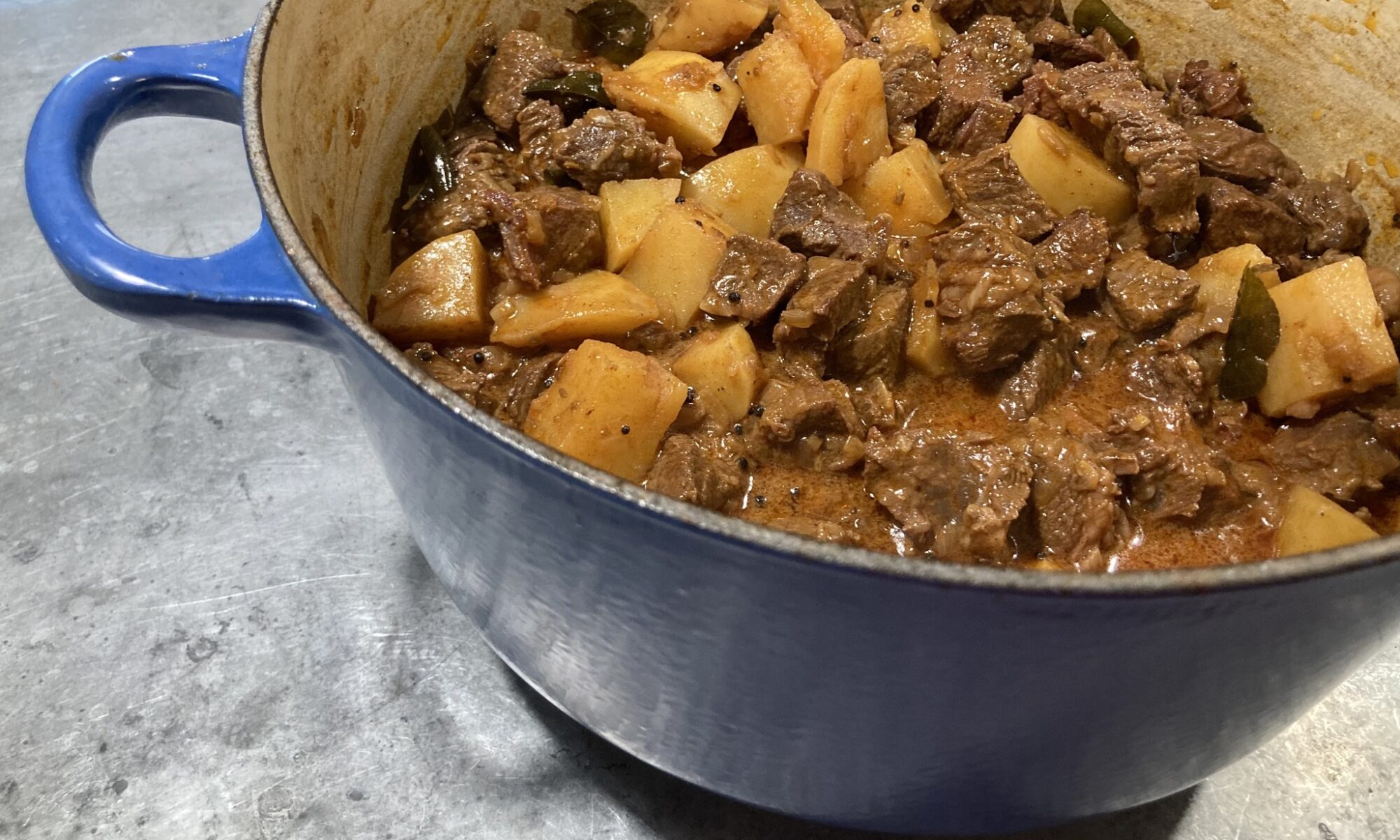 Nice to have enough time to make my favorite curry. 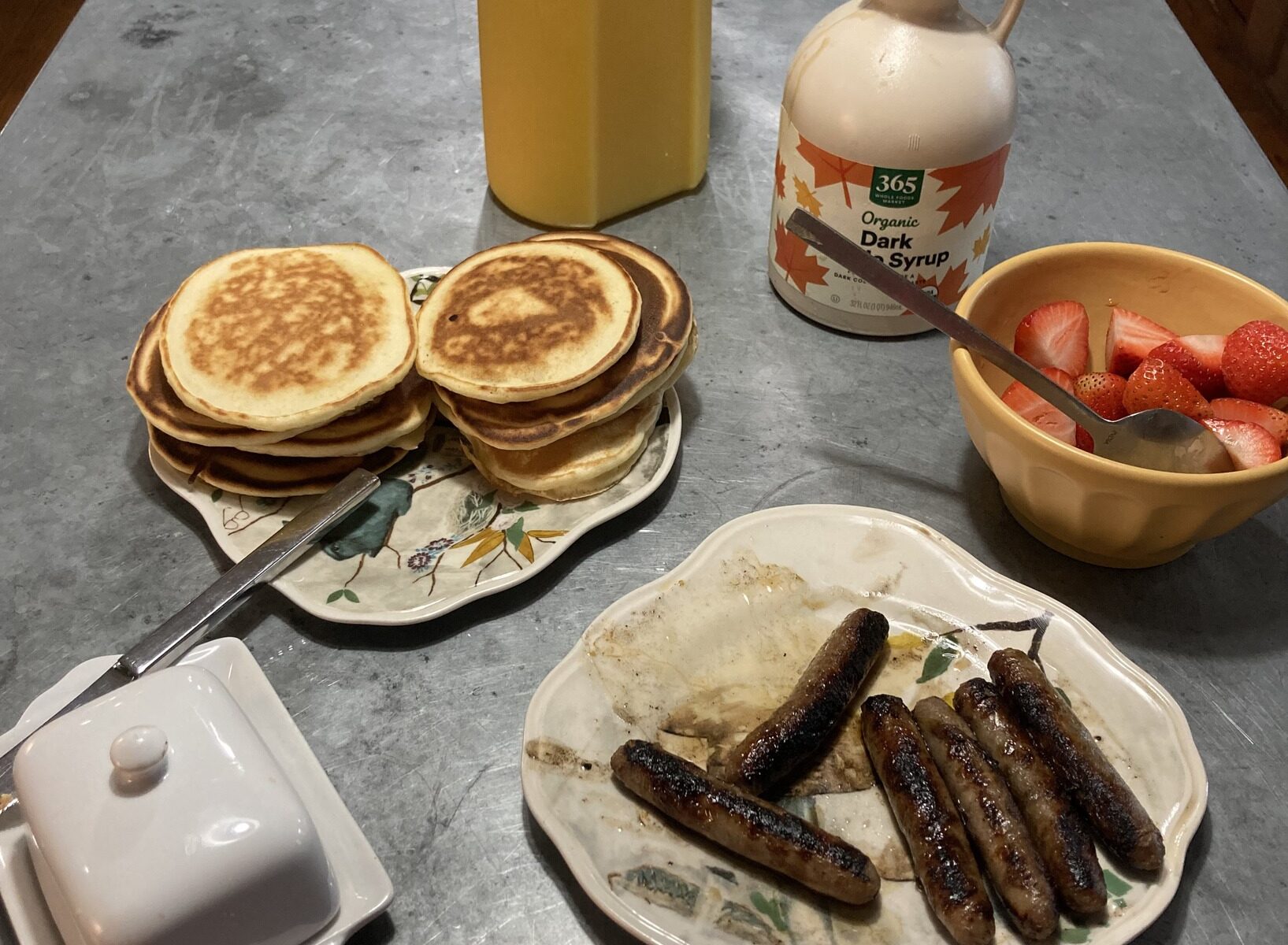 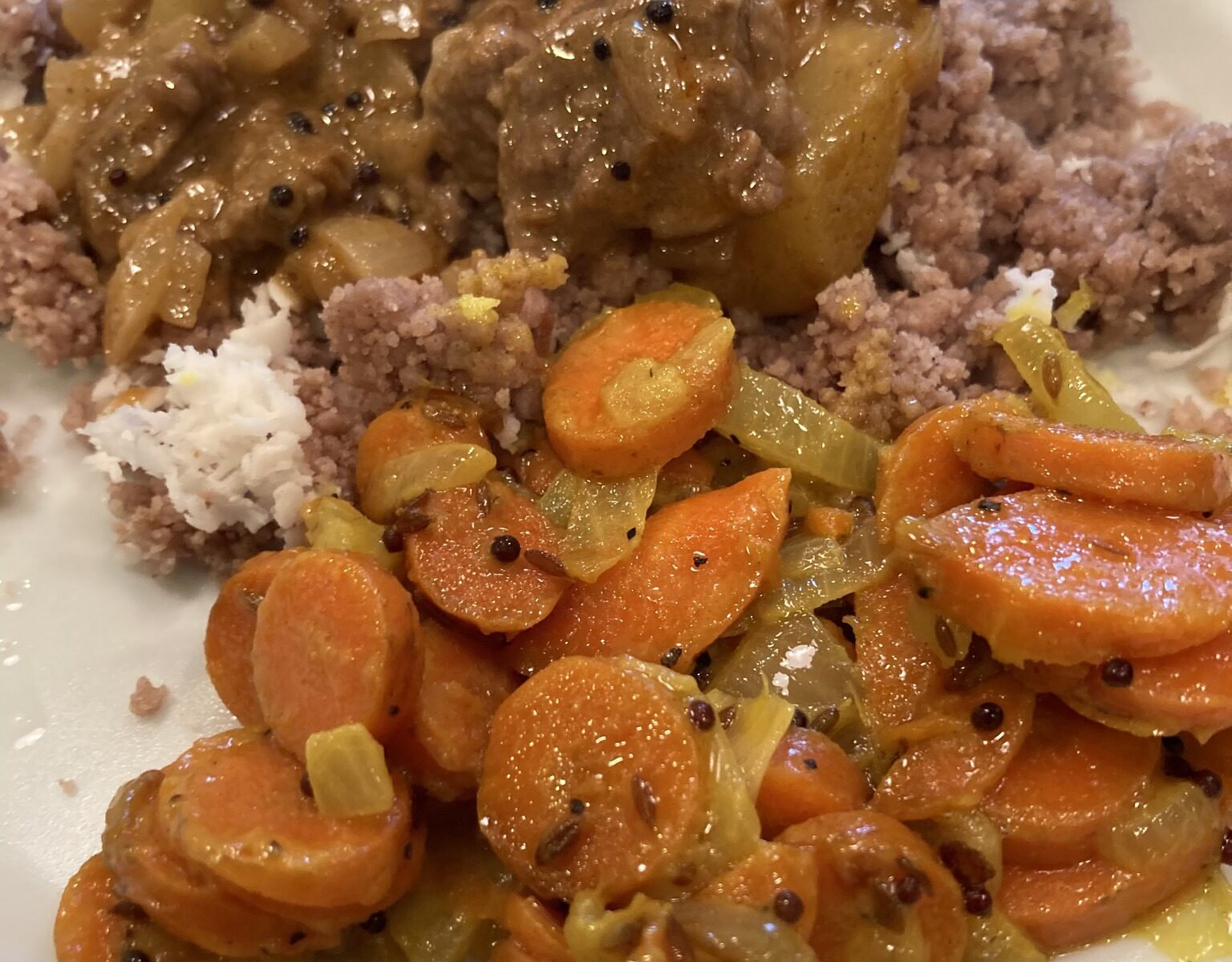 I tried to reproduce two of Amma’s classic dishes to tempt her appetite — we’re trying to get her to eat a little more. High stakes cooking!

The carrot curry actually came out better than it has in years, even though I didn’t have green chilies on hand. The beef and potato curry was reasonably good, but not as good as hers, and I don’t know why! Her cooking is just magic. 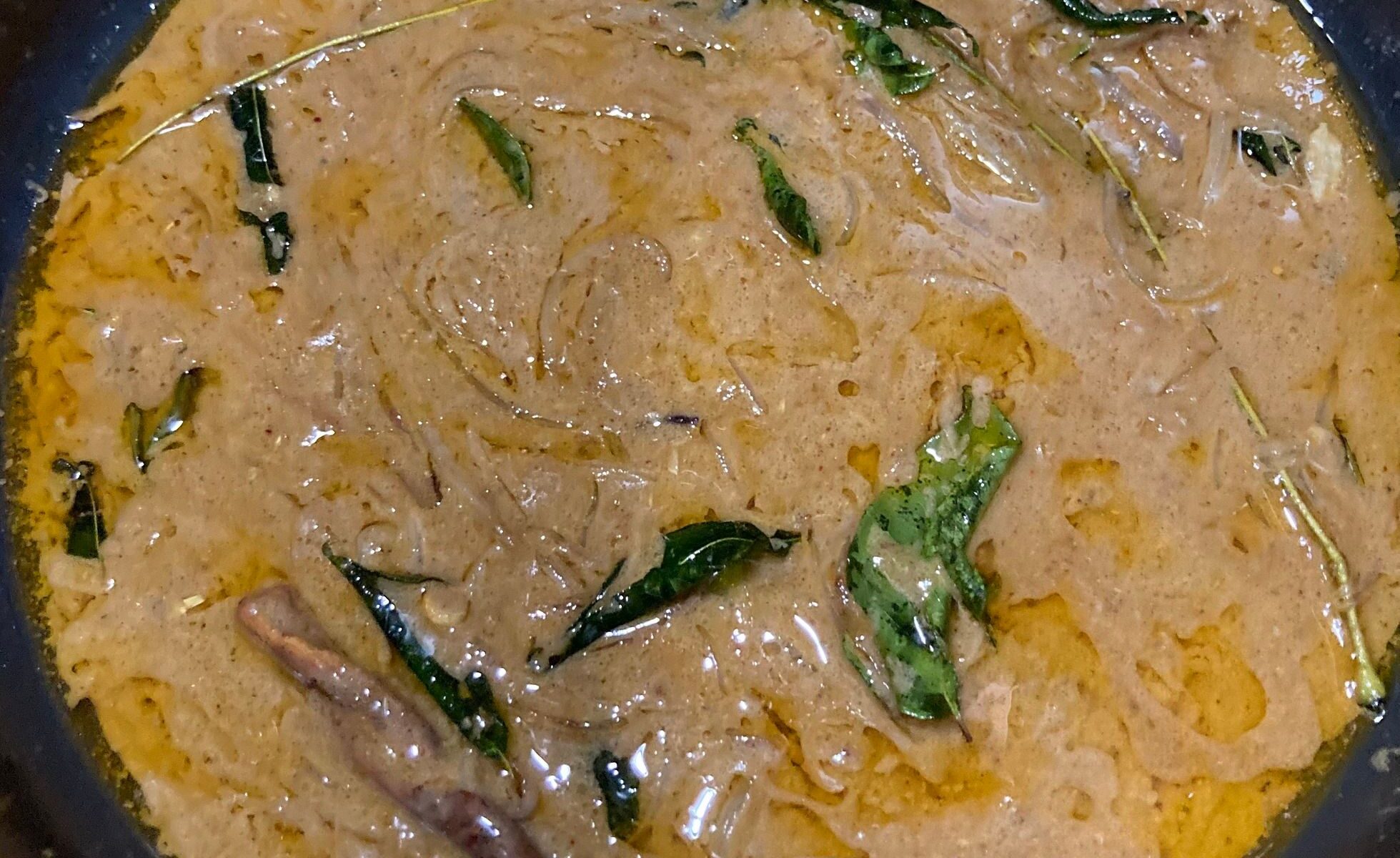 I was getting a little tired, so I almost didn’t make the kaliya curry, but then Kevin was willing to do all the prep for me, so I lay on the couch and watched Darby & Joan (Acorn TV, one season so far, set in Australia, retired nurse and retired inspector solve crimes while cranking at each other about their dubious life choices, fun) while he did all the work.

I did eventually take over the deep frying and the curry making, though. Eggplant, plantain, potato, in a sweet-tangy coconut milk gravy. I admit, I prefer the variant that adds chicken liver — I find that totally addictive. But for a big party, going with the still delicious vegan version seemed a better option. 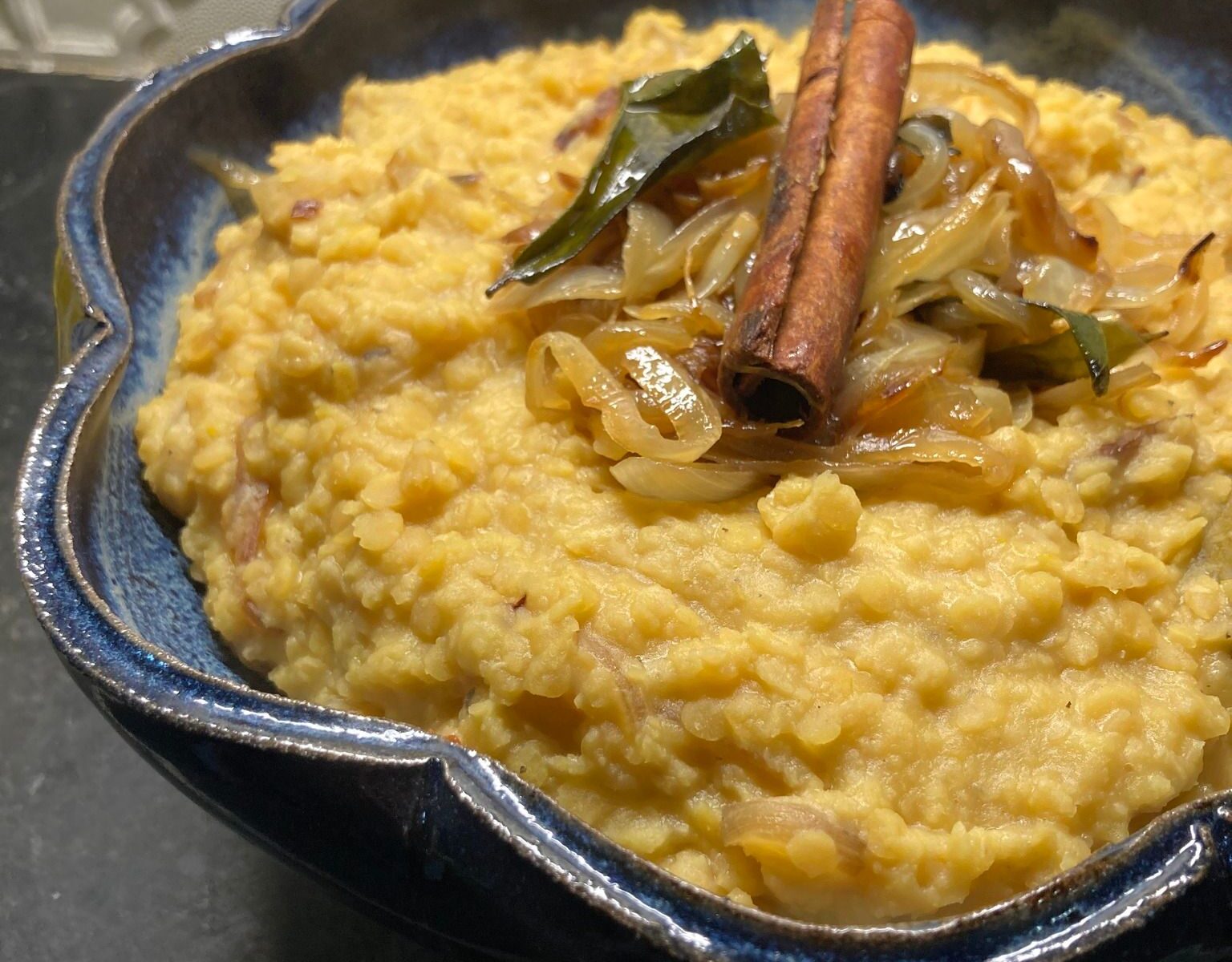 More of yesterday’s cooking: green jackfruit & chickpea curry, curried lentils in coconut milk. The best part of making curried lentils for me is that I get to lick the spoon clean after transferring them out of the cooking pot. So yum.