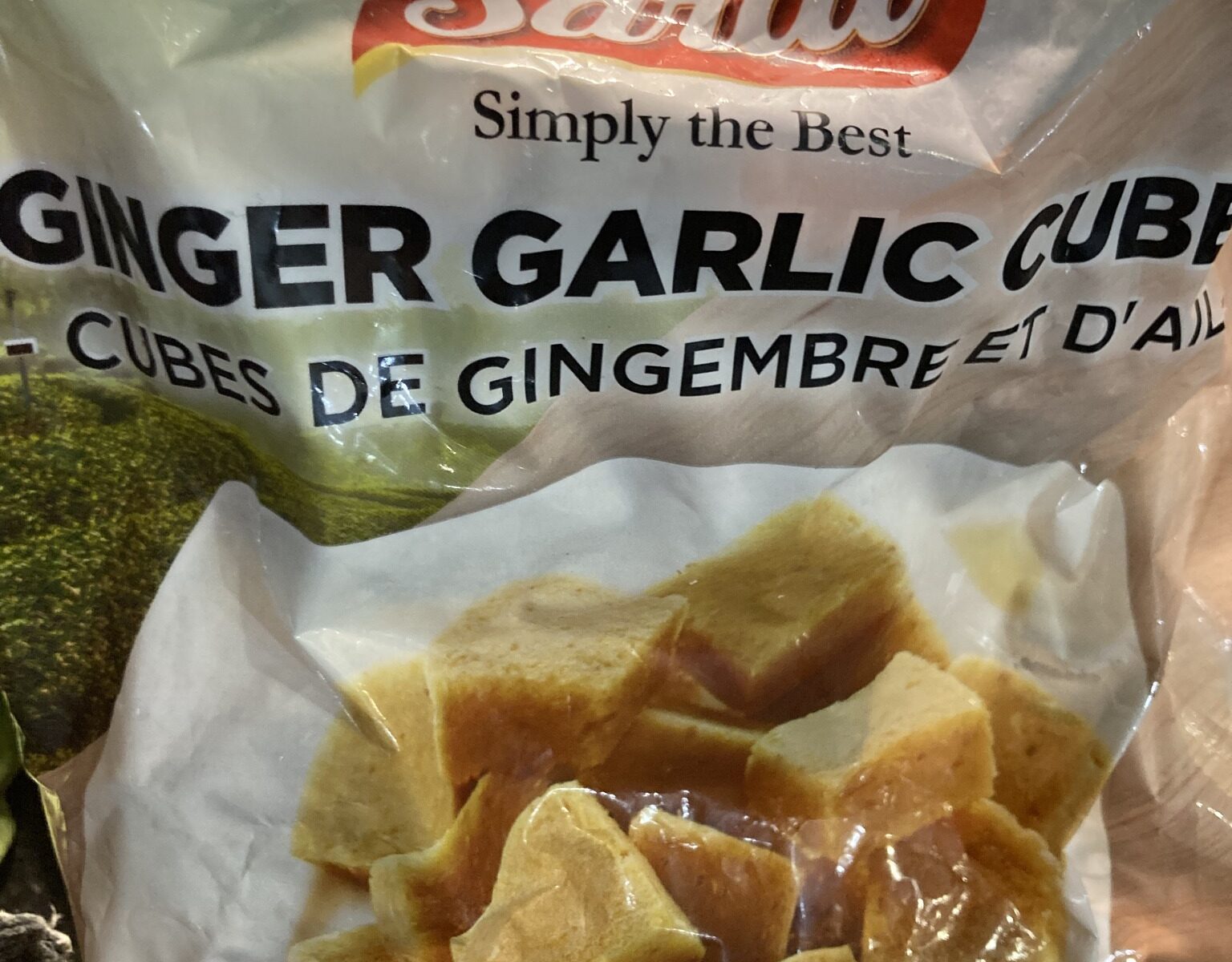 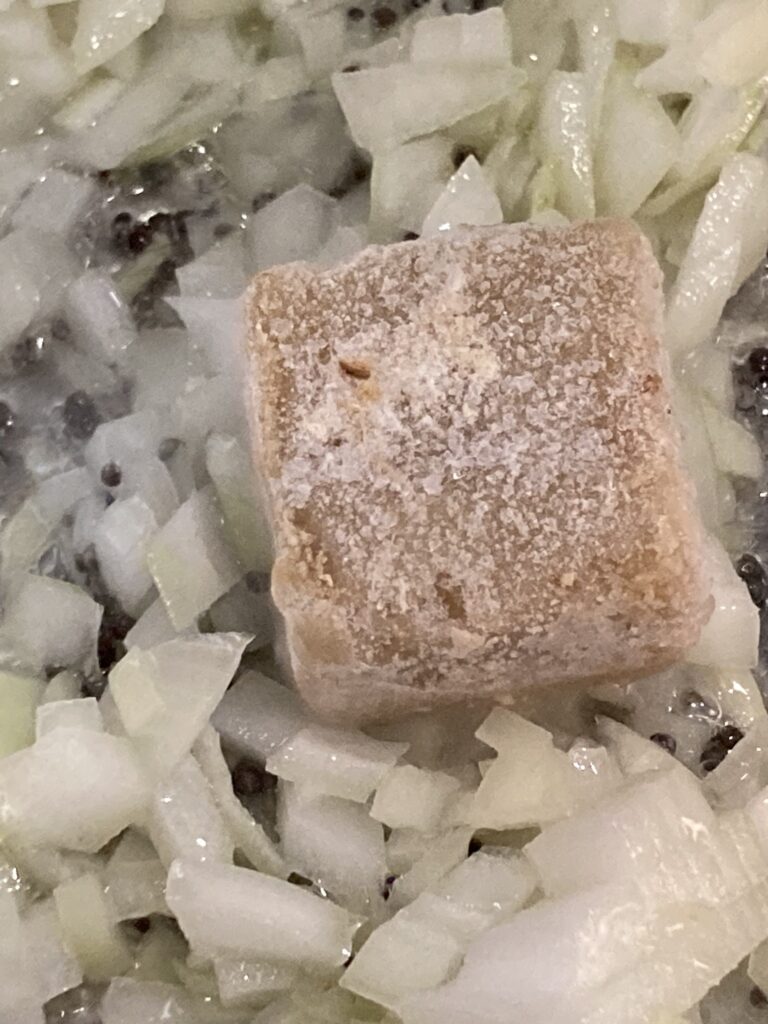 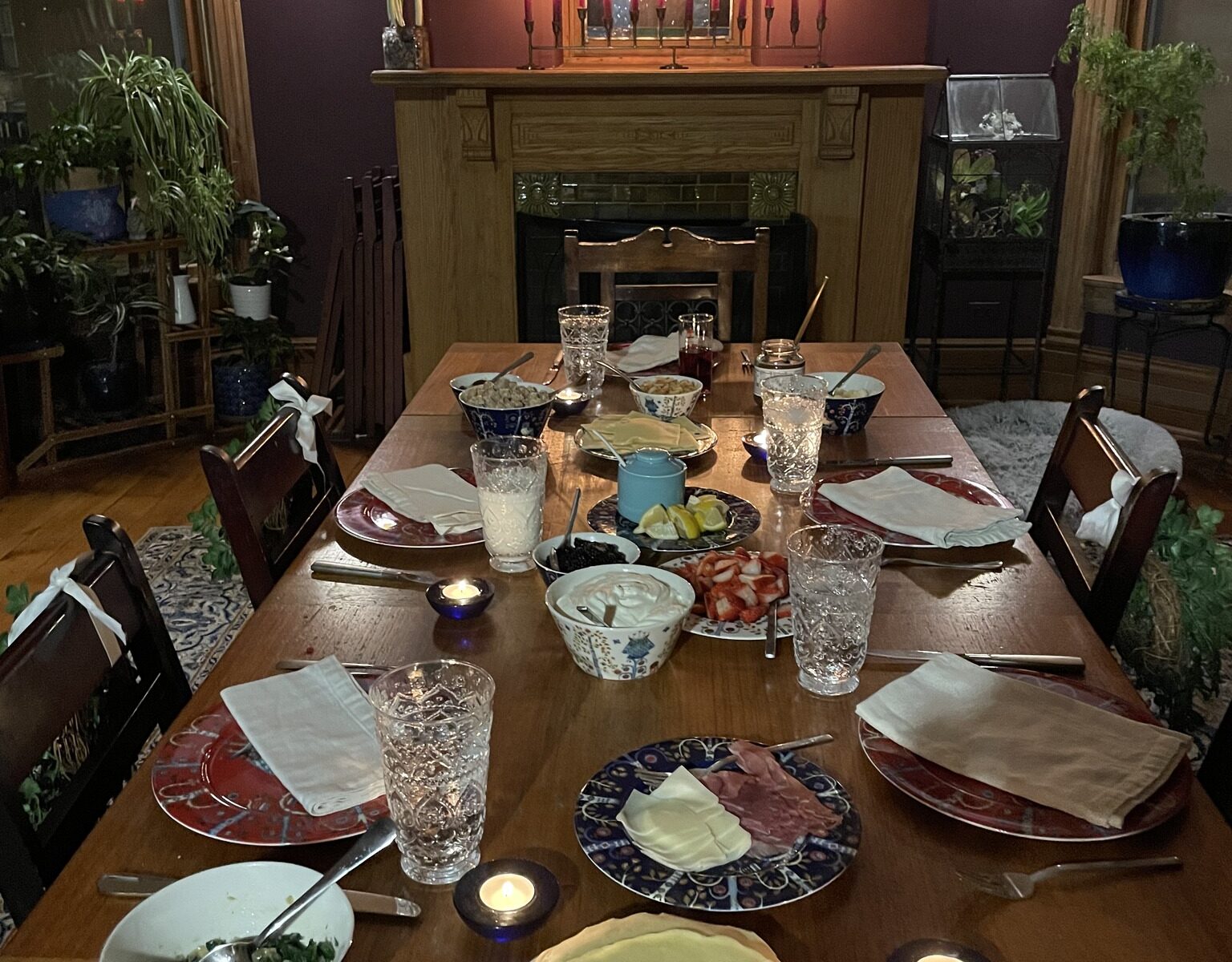 Sunday night dinner — Kavi had a friend joining us this time, which was new and fun. Tonight was crepe bar; her friend was a little bewildered by savory and sweet being on the table at the same time, but once we explained the protocol (do what you want, but most people do savory first, then sweet), they were fine with it. 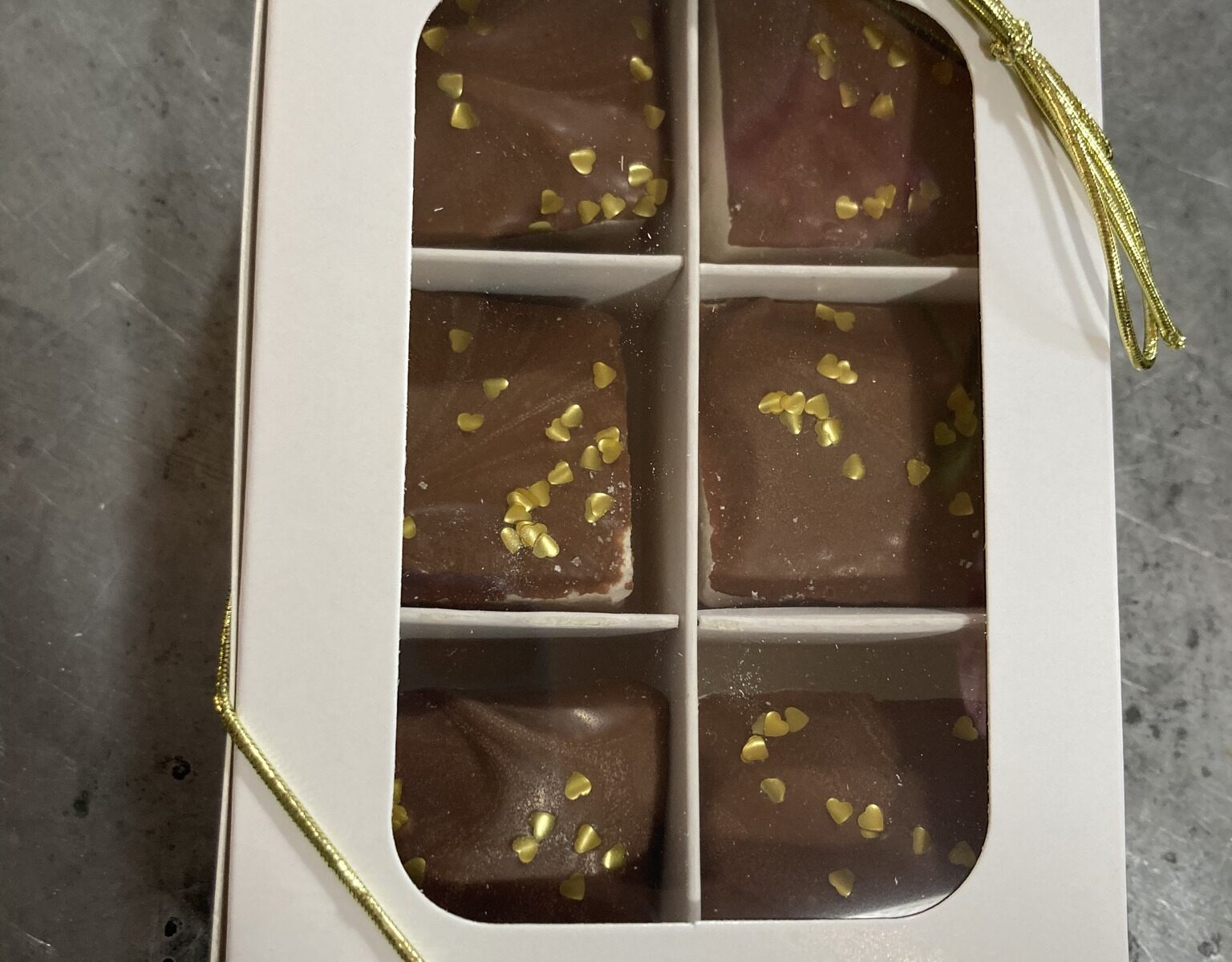 The new packaging I found is also the perfect size for dipped marshmallows.

Yay! These are passionfruit dipped in milk chocolate with tiny gold hearts… 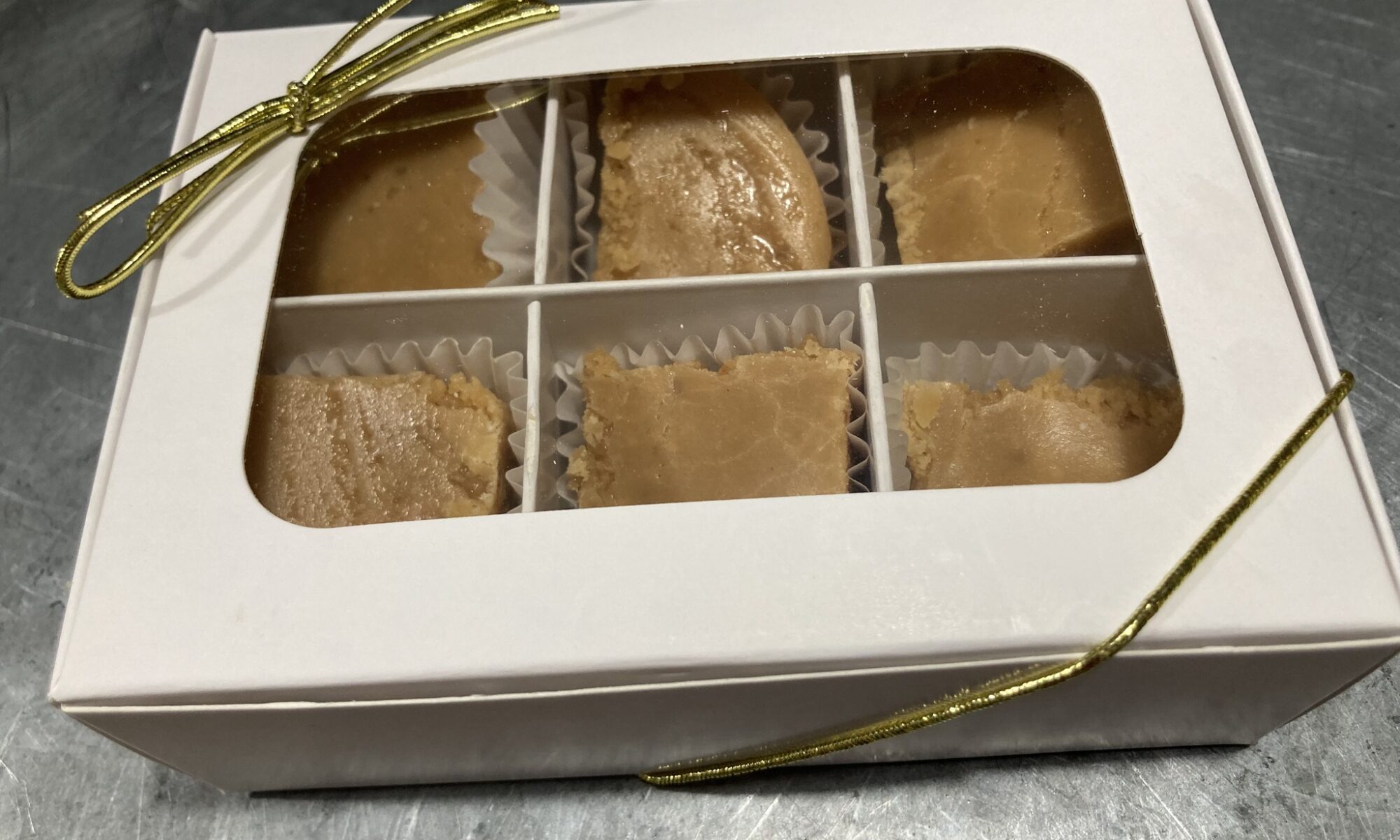 Found new packaging that I like for the cashew milk toffee.

It’s the little things. I wanted something pretty enough for gifting — I think this qualifies!

Milk toffee when it’s almost ready to be poured — we’re looking for ‘soft ball’ stage. Just another degree or two to go…

Milk toffee in a pot that is JUST big enough. Living dangerously — this is not recommended for beginners. 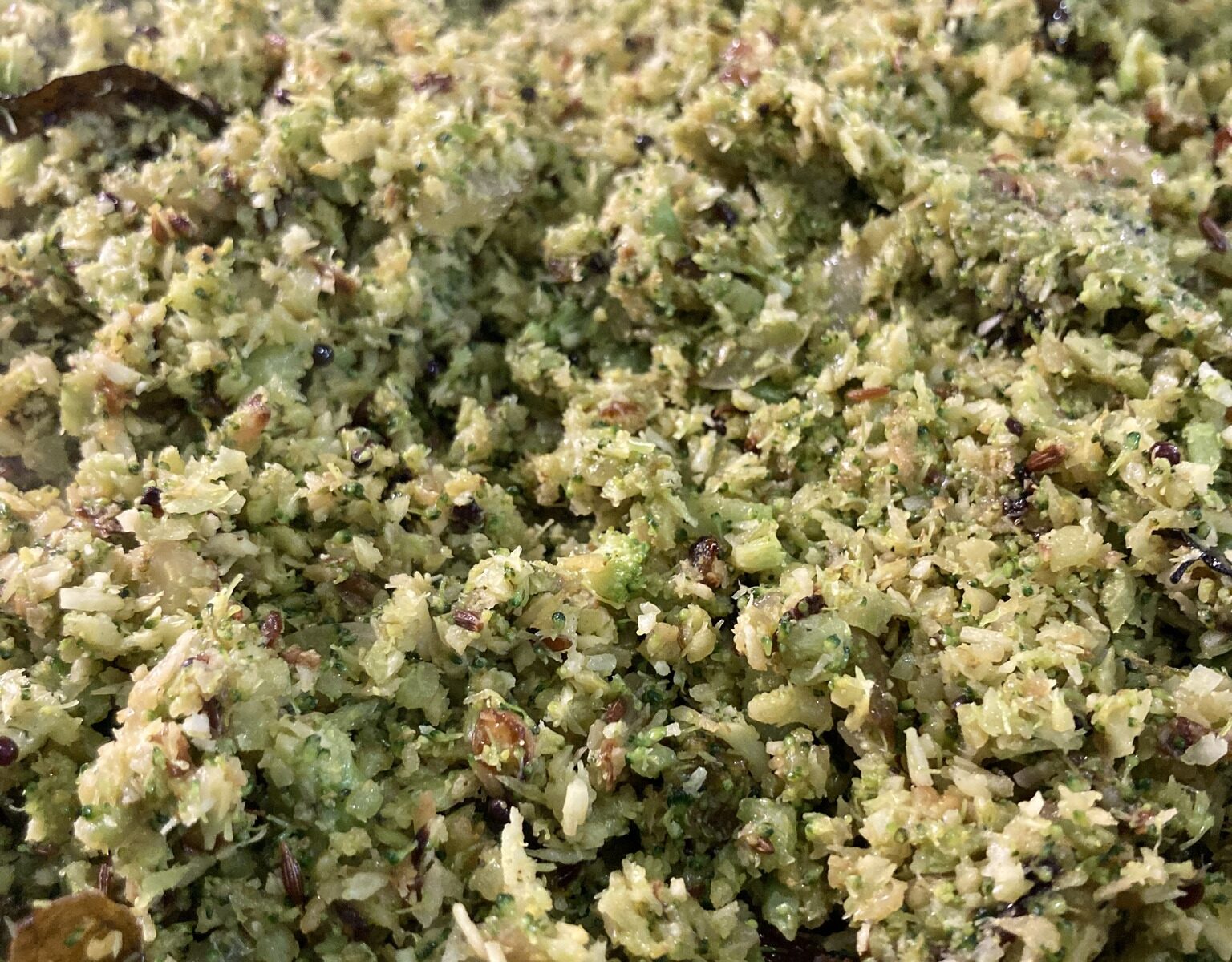 A good way to get green vegetables into children.

Note: I keep this fairly mild, so my kids will eat it, but for a spicier (and more traditional) version, chop 2-3 green chilies, and stir them in during step 1.

1. Sauté onions in oil on high with curry leaves, cinnamon, mustard seeds, and cumin seeds until onions are golden / translucent (not brown).

2. Add broccoli, salt, pepper, and turmeric; fry, stirring, for a few minutes. (If the broccoli starts sticking to the bottom of the pan, you can add a little water.)

3. Add in coconut and stir for five minutes.

4. Taste, and stir in sugar and/or lime juice if desired. Serve hot, with rice and curries. 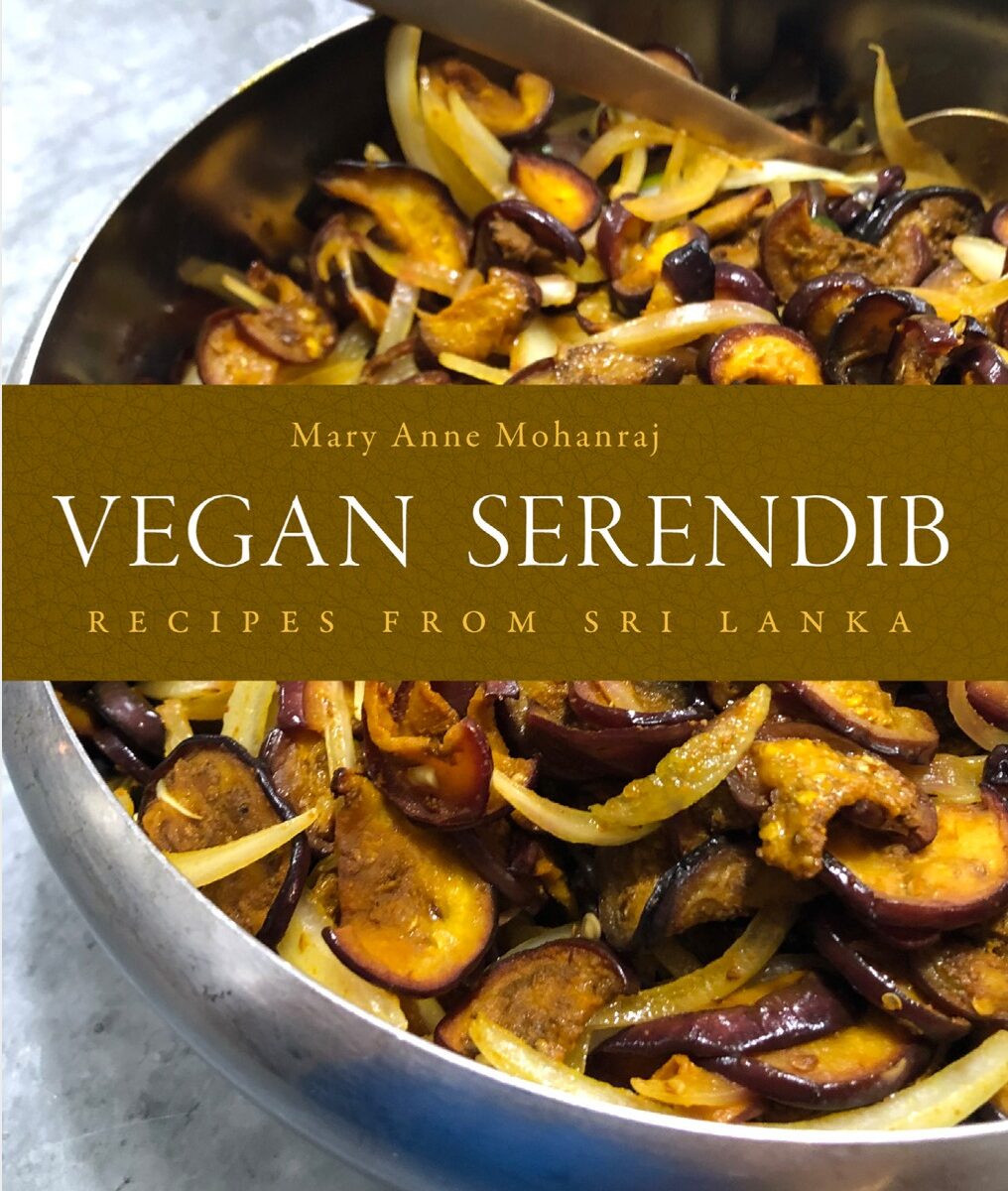 Hey, quick question(s). I’ve been doing a vegan recipe / day for several days, and planning to continue for the rest of the month. But there are 140 recipes in the cookbook, and I’m wondering whether people have any preferences for what types of recipes I cover.

So far, I’ve just been alternating, with some veggie curries, some starch bases (rice, etc.), some accompaniments, and one beverage. I was going to do a dessert this weekend, probably.

And do you have a preference for food that’s likely to be easy to cook with what you have around already, or dishes that might require a little more hunting for ingredients?

So far (I might be missing one or two…) 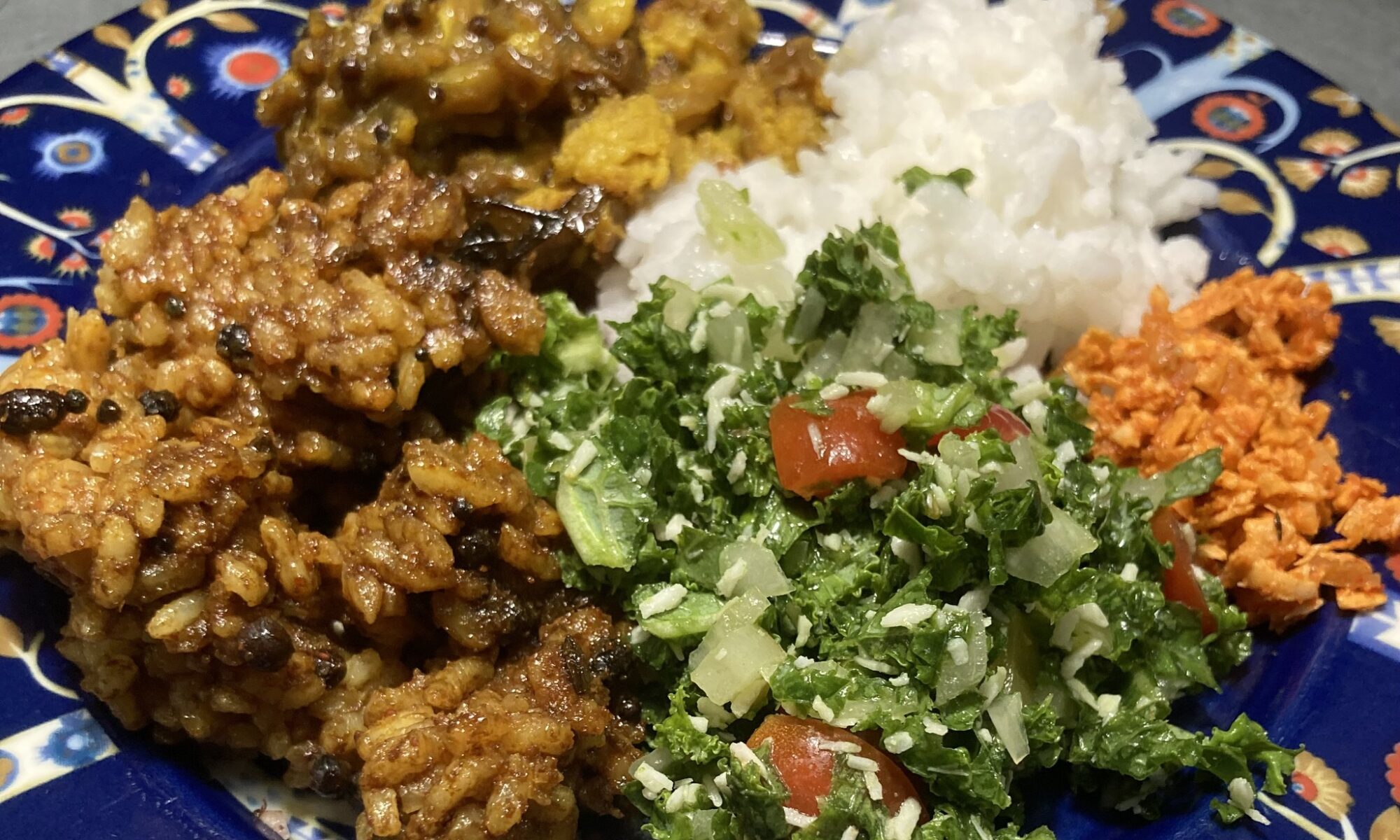 It’s been interesting trying to cook a vegan dish every day for a month. We’ve obviously ended up with a lot of vegan food in our fridge, more than we usually have, so it was a good thing that I had a staff meeting here on Tuesday, so I could feed people.

I ended up making a beef curry too, though — I found myself sort of hesitant to serve several people an entirely vegan meal without checking with them first, because I think people who are used to eating meat regularly often don’t feel quite satisfied with an all-vegan meal.

That question of ‘satisfaction’ is a really interesting one, because it’s mostly a mental thing, I think? Partly it’s craving / expecting a certain kind of firm texture — chickpeas and green jackfruit give some of that, but a lot of other vegan dishes, especially curries and pickles and chutneys, are…soft?

I’m not sure what else goes into it — something to keep thinking about. Maybe this will turn into an essay at some point.

Would love to hear whether you find vegan food satisfying, and why or why not?

This meal was beef curry, deviled potatoes, green mango curry, kale sambol, cucumber salad, all on a bed of rice.

By contrast, I’m including an entirely vegan meal from a few days previously: tamarind-lentil rice, cauliflower curry, kale sambol, coconut sambol, a little plain rice. Personally I found this quite satisfying, I think because the cauliflower has some textural sturdiness, and the lentils are crunchy and protein-rich. (I could have skipped the plain rice, honestly, but I was trying to use some up.)