My in-laws have been visiting for a few days, so we’ve been cooking for a larger array of palates than usual.  Holiday cooking for a large group is a little like being on a game show — can you feed all of these people in a way that makes everyone happy?  Can you do it for three meals in a row?  How about for three days in a row?  (They did go out for brunch yesterday, which helped!)

It’s already somewhat challenging cooking for just me, Kevin, and the kids — Kev and I both love spicy food, but he doesn’t eat mushrooms (sad) or fish (tragic).  The kids mostly don’t eat spicy food, though we’re working on that, and their appreciation for vegetables is still fairly limited (but improving).  With the addition of the relatives came more restrictions — my mother-in-law doesn’t like beets or cilantro (but my father-in-law does), my sister-in-law doesn’t do spicy, and her daughters aren’t big fans of spicy either.  Etc. and so on.

All of which means that we could just stick to mac-and-cheese to feed everyone, but after three days of that, I just can’t take it anymore.  I like pasta as much as the next person, but before too long, I start to crave South Asian food.  So last night, we did our best to cook South Asian food that everyone would eat.

Having several dishes meant that we could expect people to skip one or two and still have plenty to eat.  I left out the chili powder on the ginger-garlic chicken, and that went well; I left out the mustard and cumin seeds on the vegetables, because I wasn’t sure the kids wouldn’t find them suspicious, and I used onion powder instead of onions, because various people don’t like pieces of onion.  We just put one jalapeño in the cabbage, instead of three Thai green chilies,  and we reduced the chilies in the beets similarly.  And I made a cucumber raita, just in case it was still too spicy!

I wouldn’t say it was a complete success — despite my children’s urgings that the chicken was really good, their cousins refused to try it!  But I think the adults were mostly fine, at least, and everyone was fed sufficiently, and I got a little of the food I love and need — the flavors were milder than normal, but still in the right continent, at least.  Good enough! 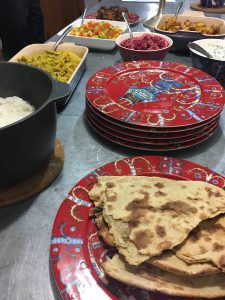 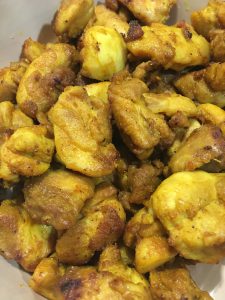 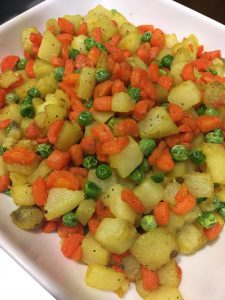 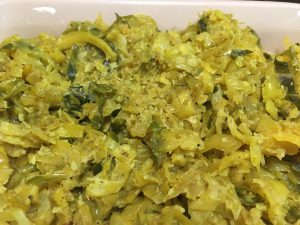 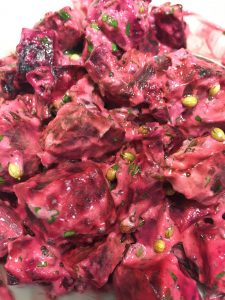