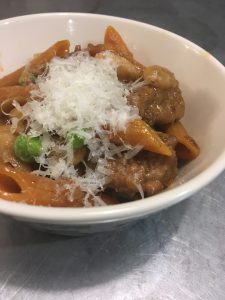 You may remember that I’m on something of a kick to convince the kids to eat beans, as part of an attempt to get us to eat healthier and also less carnivorously.  (I don’t know that we’re likely to ever go all-vegetarian, given how much we like meat and how weak our wills are, but we can at least reduce how much meat we eat, which is better than nothing, for ourselves, for the animals, for the planet.)  You may also remember that pasta with broccoli rabe and cannellini beans was a dismal failure — the broccoli rabe was so bitter that the kids declared the entire dish inedible.  (Kevin and I liked it.) 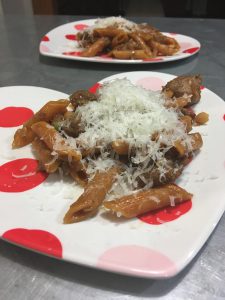 For take two, I figured I would coax them into it.  I’d use flavors I knew they liked (chicken broth and Parmesan), I’d add in Italian sausage, and I’d cut the amount of beans in half, so they’d be a little less overwhelming.  Success was…mixed.  I thought it was delicious, though the peas were perhaps a little too similar in texture to the beans.  (Should’ve stuck with my original plan to serve this with broccolini, but I forgot to pick some up at the store, oops.)  Anand ate his entire plate and had seconds, hooray!

Kavya, sadly, avoided both beans and peas (she did have two bites of each, to show willing, but that was all I could talk her into), ate lots of sausage, and said that even her beloved pasta tasted strange to her.  Ah well.  I’ll probably try making this or something like it a few more times and hope that she gets more accustomed to the flavors.

1. Sauté onion in olive oil on medium-high, stirring, until softened.  Add garlic and continue sautéing until onions are golden-translucent. 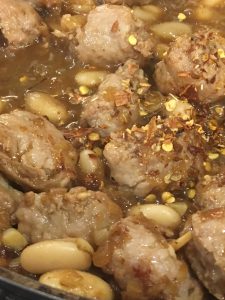 3.  After a few minutes, add white wine to deglaze the pan, scraping up any browned bits.  Add chicken broth and beans, stirring to combine.  Add Parmesan and crushed red pepper.  Simmer on medium until sausage is cooked through, 5-10 more minutes.  By that point, the liquid should have reduced to a nice thick sauce. 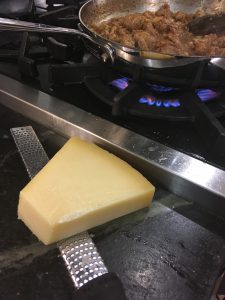 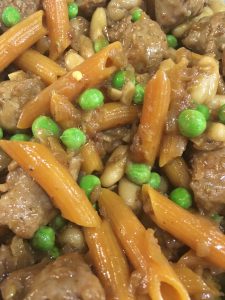