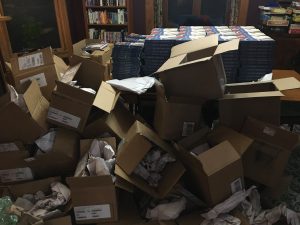 My house has been overtaken by book boxes and confectionery (pictured: chai-ginger & saffron-rose), I have a knife blister on my forefinger from cutting sweets and a burn on my other forefinger from absent-mindedly touching the wrong bit of the candy thermometer, my right arm feels like it’s going to fall off from all the stirring of roasting spices, and I was too excited to fall asleep at a reasonable hour last night and then woke up two hours early. It’s packing day for the Kickstarter!!! Woot!!! 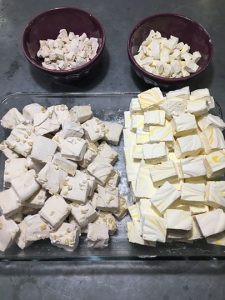 Well, to be more accurate, it’s the start of packing-and-shipping week(s), because this is going to be something of a process. There’s lots of bits and bobs to finish up and get done — signing and personalizing, packing up assorted candy packets, etc. But we should have plenty to do at the packing party tonight — my goal is to a) feed people some nice rice and curry, and b) get the bulk of the packages put together, ideally while c) having some fun Bollywood movie going in the background (recommendations requested, as I am very ignorant of this genre — something available on Netflix or Hulu or Amazon Prime?)

I do have one item that I have completely failed to produce so far, the recipe cards, which I keep meaning to write and order (I need 1200 of them, eep, I guess I’m not going to be doing it at Kinko’s and cutting them on a home paper cutter), so we have to figure out a solution for that.

I don’t want to delay peoples’ books that they might need for holiday gifting, but I also want to do a nice job on the cards, instead of some slipshod rush thing. (I could, for example, print out recipes and cut and paste them onto the postcards we already have, setting my daughter and her friends to hours of glue-sticking, but that would look terrible. No.)

I feel like I’m flooding my backers with e-mails, but I think the right solution is probably to write to them one more time, and ask them to let us know if they need the book shipped out immediately. The people who do, we’ll send their packages, and just send the recipe cards separately in a manila envelope later. The people who don’t, we’ll ship it all together in a few weeks, when the recipe cards arrive — they should still arrive in plenty of time for winter holidays, I think, barring disaster.

I feel bad about adding one more delay, but really, I am not an automaton, and I can only do so much. Sometimes, I just hit time or physical limits, esp. since I’m not willing to neglect either the family or the teaching job for this. (My writing on the other hand…oof.)

This has definitely been an education in what goes into publishing a physical object in a serious way. I am not becoming a professional chef! I am also not becoming a full-time publisher! But I’ve learned a lot in the last few months….