Stephanie asked me this morning, as we were wrapping up the Kickstarter fulfillment for Feast, and as I was making a final batch of milk toffee and cutting the last trays of marshmallows, whether I actually liked making sweets and soaps for days on end. The answer is complicated. I think it comes in two parts. 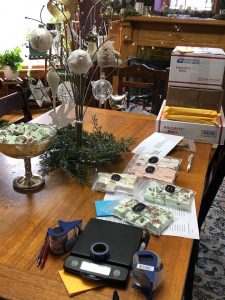 I told her yes, but also that I didn’t love all the parts of the job — I love recipe development, and taking and posting pretty photos, and teaching people how to do things. I like melting sugar and swirling soaps. I don’t love cutting up endless trays of sweets; I’d gladly outsource that part of the gig if I could.

Kevin came down at 10 a.m., on his way out the door to give a final exam, and asked how I was doing; I told him my back was aching already, and he paused to rub it for a few minutes; if I could have, I’d have kept him there for an hour. My hands are perilously close to cracking with all the washing I’ve been doing; lotion just can’t keep up. My arm muscles have built up, but my right arm still aches after all the stirring; I could really use a little ambidexterity right now.

It’s also not easy balancing a seasonal business (Christmas gift orders!) with family who would still like to celebrate an actual Christmas — ‘mama makes Christmas’ even in our mostly-evenly-divided-domestic-labor household. Especially since Kevin and I also still have day jobs, and are in the midst of end-of-semester e-mails and grading.

The days have been unscheduled, but very long lately — I get up at 7 and pretty much work straight through until 11 or midnight or on occasion, 2 a.m. Ridiculous holiday movies and superhero shows have kept me company, so it’s fairly pleasant work, but I still fall into bed exhausted at the end of the night.

Still, we’re almost done with the Kickstarter orders — I literally have one more tray of milk toffee to cut up and pack, and one more batch of curry powder to grind, and then I can fill and package and mail the last physical order, woot! (Stephanie has been a hero, and worked well beyond the minimum the job originally anticipated; I could never have gotten these all out in time for Christmas without hiring help!)

As we finish up the Kickstarter orders, I could wish that there was a day or two of downtime before we go right into a) our annual Christmas party on Sunday and b) the holiday faire I’m selling at next Saturday. It’ll be about ten more days before I’m actually done with production cooking; once done, I’m looking forward to taking a nice long break. (We traditionally do an open house potluck for New Year’s, and I’m planning to order tamales and samosas for our portion, and call it a day.)

But none of that’s really the complicated part. The complicated bit has to do with types of work & motherhood, and how they do or don’t combine.

Fairly often friends of mine wish out loud that their job was more of the creative, work-from-home, sweet-making, etc. kind of thing that I’ve been doing a lot of lately. And in many ways, this kind of work is pretty great — it does have a creative element, which is satisfying. I get to set my own schedule and hours to some extent, although like any small business, starting up always takes way more time than you think it should, and you always feel like you could be doing more to grow the business, or at least break even…

A huge plus is that I can do this around and with the kids. I can take breaks to put a child to bed or help with homework, and I can even include them in the soap-making or cookie baking. With kids who are still young-ish at home, that’s been important to me; I know being able to choose this kind of family-participatory work is a real luxury.

So many people have to work jobs that require many hours at an office and commuting, away from their kids. I get a little of that, with the teaching, but mostly I’m teaching and commuting while they’re also at school. Writing, though — writing needs to happen in other hours too, often hours when the kids are at home and awake.

Although I can do writing at home, it’s a mostly solitary activity. If I’m deep into a project, I often have to go away and shut myself in my shed for hours on end. (Some things, like this post, I can do in relatively short bursts — this took about an hour to draft. Other kinds of writing just don’t work that way for me, no matter how much I’ve tried — I need longer stretches of time alone.)

But even if it pairs well with motherhood, domestic work (even if it makes money) is not really what I want to be doing with most of my time. That’s the part that I’m finding really tricky right now — thinking through, in a more carefully intentional way, what kind of work I want to be doing. How I want to spend my working hours on this Earth.

There was the writing of the book — developing recipes, researching, writing them down, testing them, revising, etc. That part was good.

There’s the publishing of the book, and production of affiliated goodies, which has been really interesting, but way more time-consuming than I anticipated; I think I want to be careful not to let that take over so much. I might indie-publish something else again, but if I do, I’m going to be more careful and realistic about how much time is involved, especially if I’m making auxiliary items by hand.

Because in the end, if I’m not writing, I get cranky. And I’m starting to really feel immense pressure of words, wanting to pour out. Even little posts like this one — I’ve been wanting to talk about this issue for days, to write about it, but haven’t felt like I had a chance to put down the spatula and put words to paper, because it was so urgent to get the orders out in time for Christmas.

It’s all okay — I really can go a few days without writing, or even a few weeks. But my phone has been piling up with photos of food that I haven’t had time to write down recipes for — I even have one set of scone photos from months ago that I now have completely forgotten what I did in the recipe, which is frustrating.

I have a queue of pieces piled up in my head (fiction, essays, even poems…), and I’ve been jotting down notes, but I’m really looking forward to having time — making the time — to actually start writing them again. Some are food-related, some are memoir, or gardening, or science fiction. Choosing between writing projects is a whole separate essay, which I’ll probably also write in the next few days. It’s been simmering too.

I’m a writer before I’m a cook, or a soap-maker, or a home goods photographer, etc. It can be hard to remember that, because to be honest, some of the latter work better with also being a mom.

But in the long run, if I don’t write, I’ll be a very cranky mom. And that’s no good for anyone.