The kids liked the sushi bar we did for Sunday dinner so much, I decided to do a crepe bar this time. (Sunday dinner ended up on Tuesday due to scheduling chaos, but same basic concept — kids help with cooking dinner, learning cooking in the process, and we have a leisurely meal together.) 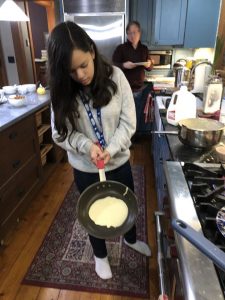 Kavi pretty much has pancakes down, so I figured she’d have no trouble with crepes. I was right. By the third crepe, she was making them perfectly. (Mir Mo Ga and Sharms, we should remember that we can reliably add her to the mutton roll assembly line for family events now.) 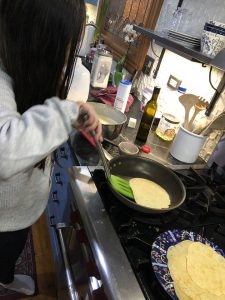 Anand was offered the option of crepe-making, but he’s still a little nervous about the stove, so not this time. Hopefully later. He does okay with the waffle maker, so it’s not so far off, I think. 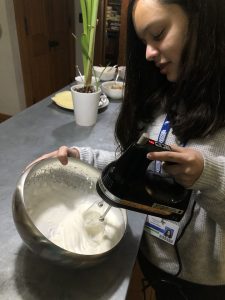 They both did fine with whipping cream — the plan was to do both savory and sweet crepes. I gave the kids the option of whipping the cream by hand, which Roshani once did when we were having a picnic at the park, but somehow, neither of them was enthusiastic about that possibility… 🙂 Roshani is hard-core. 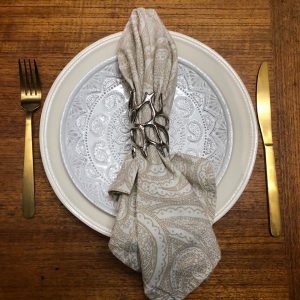 Since we were doing crepes, I decided to make the table setting rather fancy. You really can’t go wrong with mixing creams and whites and silvers and golds and taupes — it makes inexpensive components look sophisticated and elegant when they come together. The gold-toned utensils were from Target, I think, and the white paisley-patterned plates from Pier 1. Love these napkin rings that look like twisting branches (or antlers?).

I also asked Alexa to play ‘French music.’ Her choices were a little odd, but okay. Nice for a change! 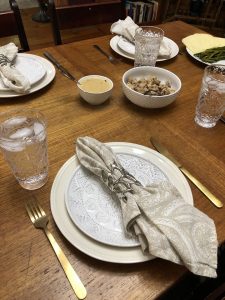 Our main plan for the crepes was to fill them with chicken, sautéed onion & mushrooms (which I had leftover from breakfast prep earlier in the week), asparagus, Swiss cheese, and a sherried shallot cream sauce. (This was my week to pick Sunday dinner, and this is my favorite flavor combination for savory crepes. I loves it.)

We did prep some things in advance, so the kids didn’t get tired or impatient with too much cooking just before eating.

• the mushrooms were already ready and just needed heating
• Kev and Anand made the crepe batter much earlier in the day (the recipe also wanted it to rest for at least an hour, which isn’t essential, but you know, can’t hurt)
• Kevin cut up and sautéed the chicken thighs in a little olive oil
• Kevin and Anand also prepped the asparagus, tossed it in olive oil, salt, and pepper, and roasted it in the toaster oven. 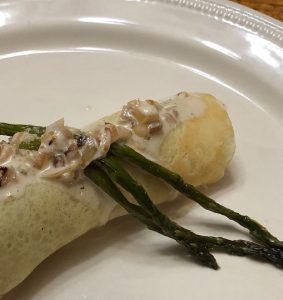 Kavi and I did the actual crepe making, but before that, we made a simple cream sauce. We started with the fond of the chicken left in the pan Kevin had used, added chopped shallot and oil, sautéed until translucent. Added a little cooking sherry and cooked that off for additional flavor (Kavi was scandalized that we were cooking with alcohol!)

Then added maybe a 1/2 t. of flour and fried that for a few seconds, until it changed color, and then poured in a cup or so of cream. Maybe a bit more.

🙂 Season with salt (1/2 t.?) and pepper, and stir on medium, until it comes together into a nice sauce, which should only take a few minutes. (You could add a bit of lemon juice at this point, which would be delicious — stir well if doing so, so it doesn’t curdle, and don’t have the heat up too high.) 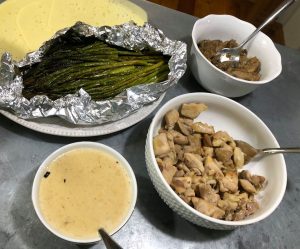 Then it was just a matter of heating up anything that had gotten a little too cold (hooray for microwaves, making this much simpler than in the old days), and sitting down to eat. The kids mostly stuck to the chicken and crepes, though Anand is experimental and did take bites of other things. They had some asparagus, though they don’t like it as much as Kevin and I. We probably should have chopped it up, so it would’ve been easier to fill a crepe with! But keeping some long does make for a fancy presentation. 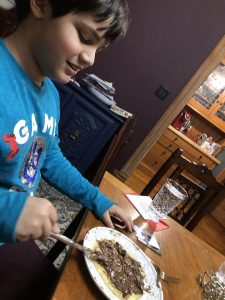 I’m not sure I convinced the kids that it was actually easier to eat this kind of filled crepe with knife and fork — they really wanted to just wrap things up in crepes and stuff them in their mouths. Well, dessert was coming.

🙂 (Preview shot of Anand there, with much Nutella.)