• tell Akbar to go ahead and book his plane ticket for the SLF (counting on the community to donate the remainder of the funds to reimburse us for it, which is a little nerve-wracking, but time is tight enough that I think it’s the best option. And we’re not so far off — $800 raised out of an estimated $1500 for the flight, and I just checked, and it looks like he should be able to find a flight for closer to $1300, so just another $500 to go). — DONE

• talk to Matt about the Portolan Project videos (DONE)

• I think I may want to actually find an animator who can do the opening to the videos; he threw something together for us, but it’s not working for me; it’s another expense I’d have to raise money for, though, so it may have to wait, unless I can find someone to donate the time / skill — should do a separate post about that at some point, but not urgent — (POST DONE)

• remind people about the 15-book Feast giveaway running now (worldwide, please do enter, link in comments!) — we are officially one week from launch, AIGH. (DONE)

• wash the guest room bedding and make the bed, since Heather will be arriving today from Ann Arbor (probably while I’m still on campus, since I get home @ 2:30), to work the weekend on Serendib Press stuff (IN WASH) 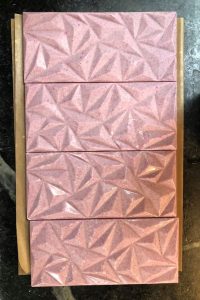 • pour two more in the mold (I can only do two at a time, so it’s low effort, but takes a few days to get through several done)

• post the recipe for the Dragonfruit Nebulae chocolates AND the one for the jackfruit & chickpea curry from a month ago that is still waiting for posting!

• read and grade student reading journals; I’d like to get those back before teaching today (next in queue)

• do Sustainable Arts Foundation grant due today @ 5 (I leave for teaching at 10:30, and do have to shower and dress, so can I squeeze that in before then? we’ll see; if not, this afternoon, down to the wire, sigh.)

• finish prepping materials for RPG I’m running tomorrow for my Jump Space universe — I was tempted to cancel, but I cancelled the first one, and I think I could probably use a little downshifting in my brain — I was a little frantic yesterday morning too, and Kevin and I lay down for an hour midday for date lunch and watched Picard, and then spent an hour talking about the project idea (for the Creative Capital grant), and the latter was very helpful and the former got me breathing a little easier. So hanging out with friends for a few hours tomorrow and playing a SF RPG will, I hope, be fun and not stressful.

• do Creative Capital grant application due tomorrow (probably will have to work on that Sat morning, after giving Heather some things to work on)

• call to set up annual vet appointments for cats, they’re due for rabies vaccines

• call to get car repair from last week’s accident scheduled

• write a long post (or several) about the economics of being a writer, relevant both to the indie publishing thing I’m doing with Feast, and the SLF’s grant efforts

• write a long post (or several) about running for office and governing — something like “Ten Things I’ve Learned While…” Maybe host AMA’s on them, if I have the energy.

Whew. I’m sure there’s more too, but that was all bubbling at the top of my brain. I was seriously tempted to get up at 3:15 and just work on it all, but the bed was cozy, so I tried to sleep instead. Finally fell asleep around 5-ish, I think, got up at normal 7 a.m. Still not sure if that was the right decision — I could be 4 hours ahead on all this right now. But also probably much more tired…