So we tried another Hello, Fresh recipe. This time, we were much more ready to just modify as desired from the start, now that we had a sense of what it was about. It was supposed to be gouda burgers with tomato jam and potato wedges. When the box arrived, we just put the potatoes in the root vegetable bin, because potatoes + buns seemed like a lot of starch for us in one meal.

We made two plain burgers right away for the kids that night, on the potato buns provided, and they seemed to like them fine, which is not surprising. Kevin and I were having lamb curry, so we skipped the burgers.

Then today, I had a little time, so I tried following the recipe, sort of, for lunch. We skipped the buns, because we wanted a fairly light lunch. The sour cream + mayo + smoked paprika sauce was nice, and I wouldn’t normally think to make something like that, so that’s a nice addition to the week’s meals. There’s quite a bit left (even though we only used half of the sauce ingredients provided), so I probably will make potato wedges at some point for dipping into this. Probably with some grilled shrimp, which I think would be tasty with this sauce.

The tomato jam was less successful, in my opinion. Slice an onion, fine, sauté until browned a bit, good. Add more smoked paprika was interesting — it’s not a spice I normally cook with, and I admit, I found the scent of it once heated in oil a little overwhelming. But I’m sure I’d get used to it. The flavor isn’t too overpowering.

The real problem was the tomatoes — they said to chop these two plum tomatoes, add them to the pan with salt, sugar, chicken stock concentrate, and water, and stir for 2-3 minutes until caramelized. People, you can’t actually caramelize anything in 2-3 minutes. So it was definitely going to take a little longer to cook down to a somewhat jammy consistency — also, the tomatoes in dead of winter were not great, unsurprisingly, and really could’ve used a little tomato paste added in to amp up the tomato flavor. The end result tomato-jam produced according to their recipe was okay, but also a little sad, because it wouldn’t have taken much to make it a lot more flavorful.

We ended up splitting two burgers (no bun) with the sauce, melted gouda, and tomato jam on some sliced cucumber, which was a pretty reasonable lunch for us (1/2 a burger each). Tasty, not too much effort, nice for a change.

I think if you’re going to do a meal kit like this, it really helps if you amend it to the actual portion sizes you want; their original recipe of theirs probably made a meal that provided at least twice the calories we’d normally eat for dinner. 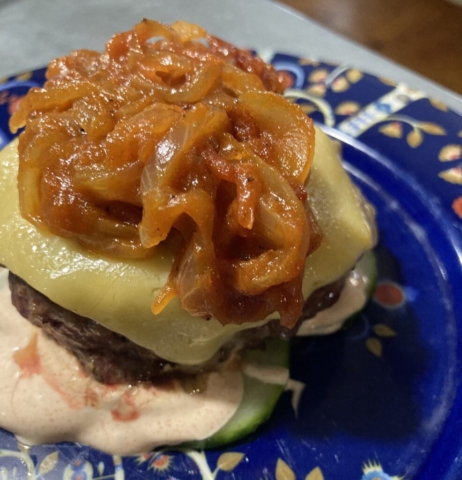 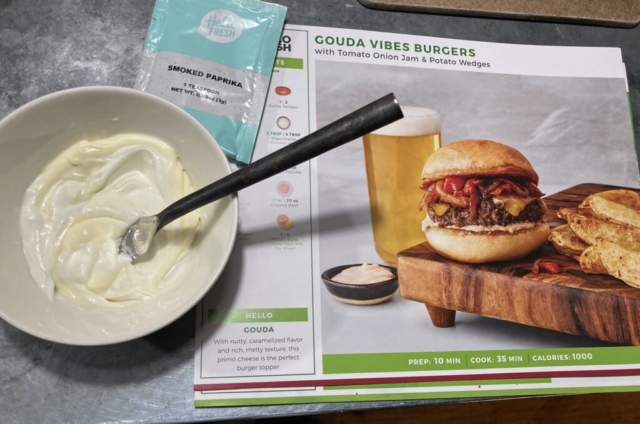 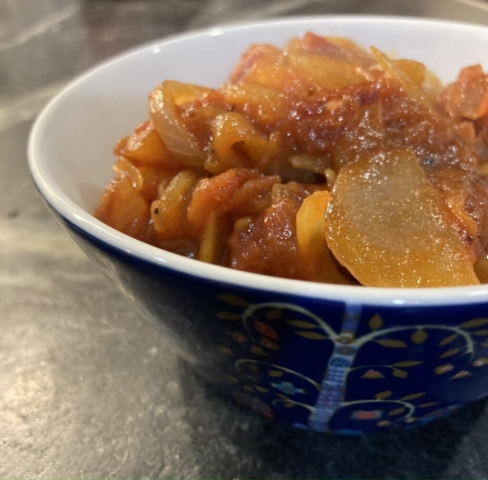 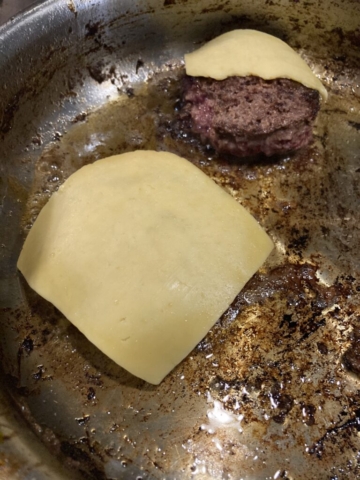