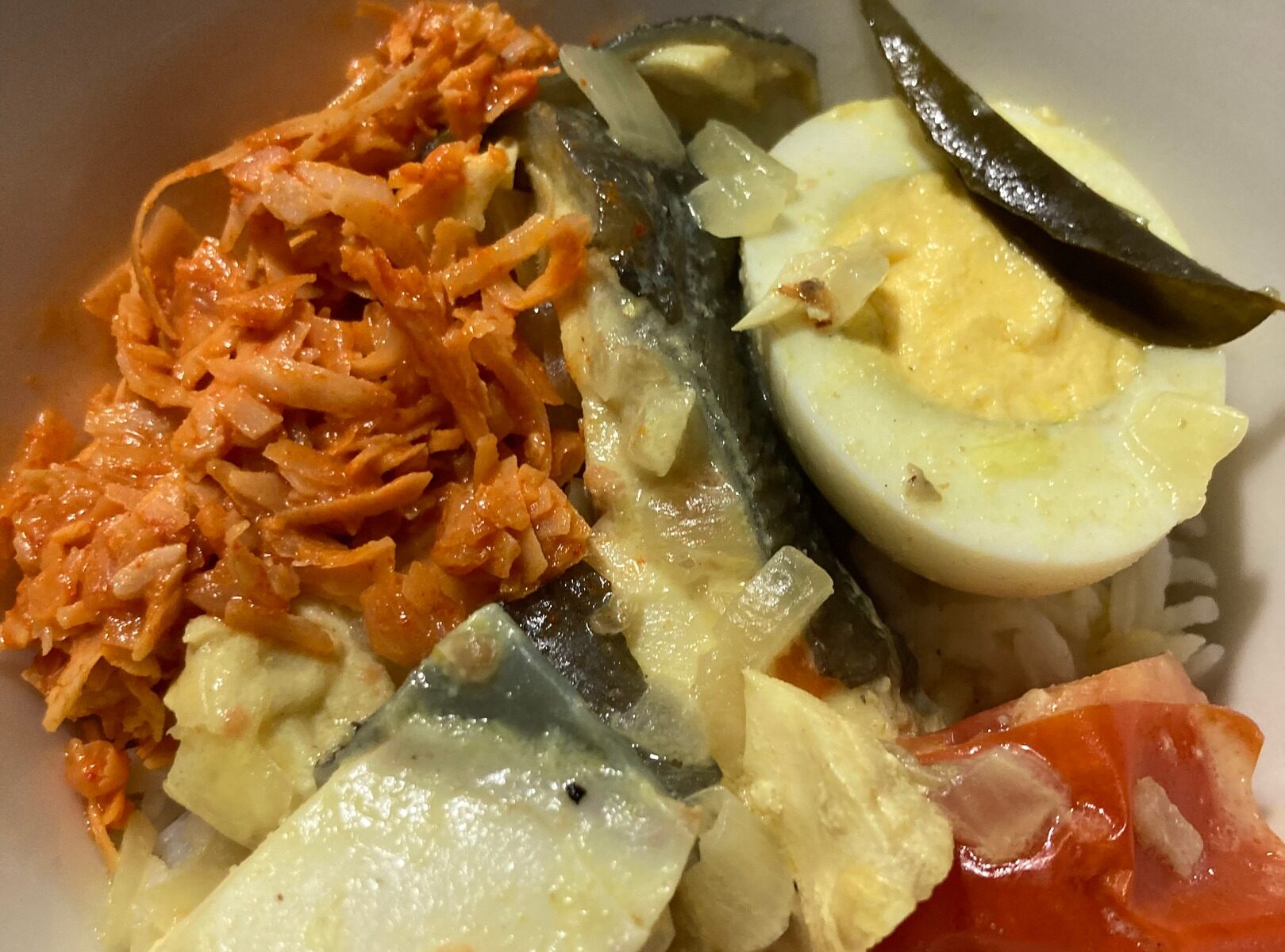 Poor Stephanie has been waiting very patiently for me to get her ONE last decent photo of a dish so we can start the publicity process for Vegan Serendib, ordering galley proofs, etc., but the problem is that it’s not just a matter of cooking one dish.

You see, the dish in question is stringhopper biryani. This is essentially a way of using up leftovers, so before you make it, you need to have previously made stringhoppers. So you’re already talking two dishes’ worth of cooking.

And then, of course, if you’re going to make stringhoppers, you’ll be very sad if you don’t have both sothi and pol sambol to accompany them. VERY SAD. So first I HAD to make both of those — luckily, I had some pol sambol saved in the freezer, which saved me a step, but I made the sothi fresh last night.

I made a fish sothi this time, with halibut, and since it’s a very mild dish to begin with, I decided to try to make it kid-palatable, in the hopes the children would try it.

Kavi objects to whole spices like cumin seeds and mustard seeds (she doesn’t like the texture, and I think she may have an aversion from the years of wearing braces previously), so I used ground spices instead, just for her. (I used already-ground, definitely milder than the whole spices, probably in part because they’d been sitting around for a while, should have upped the amounts a bit, oh well.)

And Anand can’t deal with anything spicier than a bit of black pepper, so I left out the green chilies (sad), and just used a little black pepper instead.

And after all that, I realized AFTER I’d cooked it and had some, that there were still a few bones in the fish, and if we told the kids that, they probably wouldn’t even try it. (But if we didn’t tell the kids about the bones, they might swallow bones, so that seemed like a bad plan.) Kevin doesn’t like fish, we don’t eat it very often as a result, so the kids are mostly familiar with fish sticks, which they do like, and I would really like to expand their seafood palate. They’ll need to learn with bones in fish at some point, but it’ll take a little teaching, I think.

I had to run off to my school board meeting, and I haven’t had a chance to ask Kev about it, so I don’t know if he even managed to get them to try the sothi last night. Sigh. Well, I’ll find out later today, and maybe I can take some pieces of fish and make sure there are no bones in there, and give them to the kids to try, if they haven’t yet.

Tomorrow, I’m hoping to make stringhoppers; last night, I just had the fish sothi with rice. It was still pretty tasty, despite all the kid-friendly adjustments. But I’m going to give you the proper recipe here, which is DELICIOUS. (And quite mild still, as Sri Lankan curries go.)

This is a delicious traditional accompaniment for stringhoppers, served with a little coconut sambol. When I last visited Sri Lanka, that was one of my favorite meals to have for breakfast, in the very early morning at the hotel, while I was still jet-lagged. It’s quite soothing. This makes a fairly large quantity, suitable for feeding several people; just cut ingredients in half for a smaller portion.

NOTE: Traditionally, this dish was made with quite a lot of fenugreek; modern recipes tend to reduce to about 1 TBL, instead of 4. But fenugreek is a potent galactagogue, so if you’re making this dish for a nursing mother, you may want to go old-school.

NOTE 2: Toasted rice powder is used through Asia (especially in Thai cooking) to thicken and add flavor and fragrance to dishes. It’s best made fresh, in the quantities needed. To make, take one TBL rice and sauté over medium heat in a dry pan for 10-15 minutes, stirring constantly. It’ll release a beautifully nutty, toasted scent. Then grind to a powder — I use a coffee grinder that I keep dedicated for spices, but you could also use a food processor, or the traditional mortar and pestle.

1. Put all the ingredients except the last three (coconut milk, eggs, and lime juice) in a saucepan. Bring to a boil, then turn down heat and simmer, covered, until onions are reduced to a pulp and the potatoes and fish are cooked through, about 30 minutes.

2. Stir well, add thick coconut milk and heat without bringing dish to a boil. Stir in lime juice, and/or additional salt to taste, and then carefully add the eggs. Simmer a minute or two longer, stirring, and then serve hot, with stringhoppers or rice.