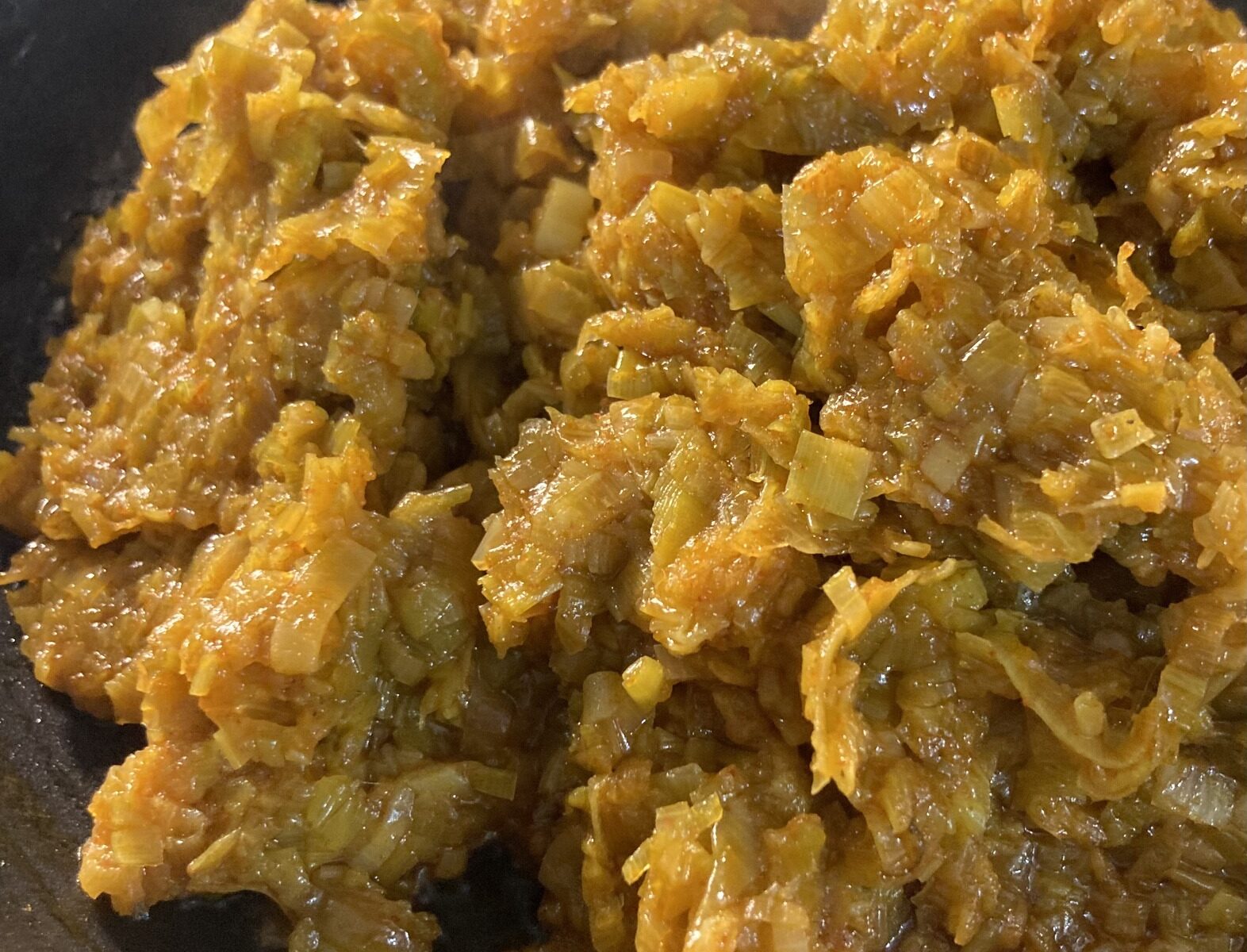 So, I feel I should note that the timing for these chili leeks is misleading — it says 50 minutes, which is true for total cooking time, but for 30 minutes of that, it’s just simmering away on low, so there’s very little active cooking. I love this dish for a few reasons:

a) it’s super easy to include in dinner party cooking, since it mostly is going on its own (just remember to set a timer so you don’t forget to turn off the heat!)

b) it’s a very spicy accompaniment, which is great to have around to serve with mild curries, so that those who want spicy can make it spicy, and those who don’t can skip it

c) it’s a vegetable dish I don’t have to chop onions for, because it’s basically onions already on its own.

Also, it’s delicious and very easy, one of the first dishes I learned to cook. If you have someone like Kevin around willing to slice the leeks and wash them for you, even better — then it’s almost no effort at all!

This accompaniment offers a little extra heat and onion-y zing to a plate of rice and curry.

1. Rinse dirt off outside of leeks. Discard any tough or withered leaves, but do use the green portions as well as the white.

2. With a sharp knife, slice the leeks thinly across the stalk, making thin rings / chiffonade; when you’re slicing the green leaves, make a tight bundle in your hands for easier slicing.

3. Wash the sliced leeks very thoroughly. The soil trapped between the leaves won’t actually taste particularly bad, but the grittiness is unpleasant. I recommend not simply running the sliced leeks under a colander—rather, put them in a large bowl of water and wash them vigorously, changing the water at least three times. This is labor-intensive, but well worth it.

4/ Heat oil in a large saucepan and add the leeks. Sauté, stirring for 5 minutes, then add the remaining ingredients and stir until well blended.

5. Cover and cook over low heat for 30 minutes, stirring occasionally. The leeks will reduce in volume. Uncover and cook, stirring, until liquid evaporates and leeks appear slightly oily. Serve hot.

18 seconds of slicing leeks; I took over from Kev briefly so he could take a little video.

It turns out that Kevin cuts them totally differently than I do — he just does one firm slice, and I have a sawing motion habit with leeks. He also started at the white end, and I typically start at the green end. However you slice, definitely hold the leek together firmly when you’re at the looser green end, and watch your fingers!

Leeks reduce quickly in volume — this is just a few minutes into stirring, and they’re half the size they were when they went in.

After stirring in the cayenne, salt, and turmeric.