I was not a very good cook in college. I’d called my mother, somewhat desperate after months of dorm cafeteria food, and she taught me how to make her beef and potato curry over the phone. I made it regularly, sometimes eating with bread, sometimes with rice. I thought I had it down.

Then one day, I set a pot of rice going on the stove. Brought it to a boil, turned it down to a simmer. And then I just…wandered off. I must have gotten caught up in some interesting conversation; I’d like to think that I was arguing about Wittgenstein, because that makes what actually happened sound slightly less ridiculous.

Some endless time later, the fire alarm went off. The entire dorm, all twelve floors, were evacuated, and I went with them, carrying a horrible pit of certainty in my stomach. About six hundred and fifty students stood outside in the cold, until the fire department finally let us back in. That’s when I discovered what had happened to my rice — our suite was full of smoke, and my rice had cooked so long and so dry that it had turned into something that looked a lot like lava. I didn’t know rice could do that.

Jump forward twenty-five years. Last night, on New Year’s Eve, I made stock. I even wrote a nice, long metaphorical post about it, cooking the bones of the old year to bring in the new. Etc. and so on. I’m a good cook these days, a very good cook, I even have a cookbook, and am hoping to publish a second soon.  I’d come a long way from the girl who burned rice.

So you can imagine how I felt when I turned my stock into chicken soup today, with a house full of guests for New Year’s, and went to taste the soup, and realized that it just smelled — wrong. Off. Possibly the sort of thing that would give my guests food poisoning. They were good friends and it was a casual potluck gathering, thankfully, but still, it was embarrassing. I’d promised them soup, but I couldn’t possibly serve it to them. We pulled some frozen pierogies out and sautéed them, and later, after they’d all left, I had Kevin pour the failed soup down the sink. I couldn’t bear to do it myself. 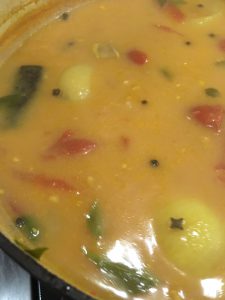 I still don’t really know what went wrong; I suspect the bones I used for the stock had just sat in the freezer too long. Sometimes, even after what ought to be plenty of practice, you just get it wrong. It seemed like a good idea when you started, but somewhere along the way, that project turned down a dark path.

For New Year’s Day, I wanted to start the year out right. Doing a little bit of everything I hoped for in the new year — cooking and gardening, writing and exercise. Spending time with friends and family. Making art.

I pulled out all my UFOs — for those of you who don’t knit or crochet, that’s what we call ‘unfinished objects.’ I can’t stand to have too many of them; it’s like being in the middle of reading (or writing) too many books. I start to get confused and stressed out — 3 to 4 is about my limit. There were four this time, some of which had been languishing for months. I made myself a promise — I would work a row on each one, and if it wasn’t fun, if it wasn’t right, I would give up on the project and let it go.

I am terrible at letting things go. Ideas, projects, people. I am acquisitive; I like to accrete. I am basically a crow in human form — if I see a shiny pretty, I want it. But time is limited, space and energy ditto. Sometimes, these things, they’re just weighing you down.

Three projects survived the winnowing — I crocheted another row on the Christmas afghan, and a flower for my daughter’s spring scarf. I knit a row of the colorwork armwarmer I had designed — my first such design. While I was cursing the artistic impulse that had led me to work with three colors instead of two — exponentially harder! — I still felt delight as I watched the pattern emerge from the twisting strands. It was worth the time I spent detangling. 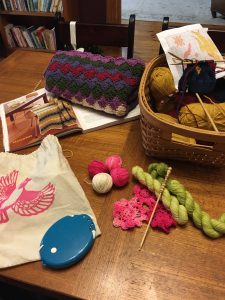 And the last project? It gave me no joy when I picked it up; it looked wrong, and sad. Recycled sari fabric, turned into yarn, that I had tried in one project after another, but none of them seemed right for it. I ripped it back — we call it frogging when you do that with crochet, because you’re going rip it, rip it, rip it — yes, textile folks are hilarious. I made it into a beautiful ball of potential again, and then I gave that ball away to a friend, who would make better use of it than I could. I felt lighter for letting it go.

This is the time of year when so many people are making resolutions, reassessing their lives, trying to do more, be better versions of themselves. I think that must have been happening since the dawn of humanity. Deep in the heart of winter, in the cave, one caveman turned to another and said, “This year, I’m going to master that fire thing. You’ll see.”

Maybe it’s also the time to be gentle with ourselves. To look at everything we’ve taken on, to see that some things just didn’t work out. We made mistakes, weren’t paying attention, made the wrong choices from the beginning. Time to reassess, let those projects go. Maybe there’s a little too much on that plate.

Pour the failed soup down the sink. It’ll be okay.

If we still want soup tomorrow, we can make more.