We’re not vegetarian, but we’re trying to be more ‘lessertarian’ these days, for a variety of reasons. Anand is tender-hearted, and would rather be vegetarian if he could bring himself to give up meat. It’s clearly better for the planet if we eat more plant-based, and it’s generally healthier too.

But it’s going to be a process in our household getting there, as the kids aren’t used to eating beans and chickpeas and the like, and of course, I really like and cook with meat all the time. So, a compromise — we’re starting with trying to incorporate more vegetables and beans into our meat dishes, which I think of as Mediterranean-style. We’re aiming towards Meatless Mondays within a few months, but it’ll help a lot if they start actually liking beans! (I have some sympathy, as I didn’t start liking beans until I encountered Ethiopian food in my 20s. Then I fell in love with them. Yemisir wat, shiro, yum.)

This dish was a success on the flavors front — I took our standard ginger-garlic chicken that the kids love, added a cup of canned chickpeas (it would’ve been better texture with soaking dry chickpeas overnight, but I was also aiming for easy dinner on a week night with no planning ahead) partway through. 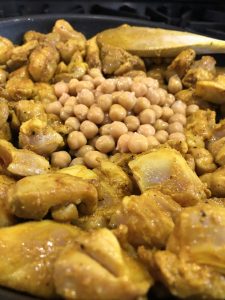 I added some peas at the end, to bump up the vitamins and fiber a bit, which were pretty and tasty, but got mushy on sitting, which is not ideal, esp. as Kavi already doesn’t like cooked peas. Next time I try this, I might try this with kale or spinach, though the kids are even less likely to like those.

I really liked the dish as it came out, and though I had mine with some toasted ancient grain naan (which Whole Foods carries now, which kind of bewilders me, but okay), if you served this with rice, it’d be a great gluten-free dinner option. Or you can skip the starch entirely — it’s on the salty side, though, so something to cut that would be nice. The kids had theirs with lots of raw bell pepper, which is one of their favorite veg. 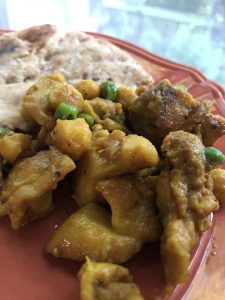 Anand ate the chickpeas (though he preferred the chicken). Kavi tried one chickpea and refused to eat the rest; I didn’t push her, because she gets very distressed when forced to eat food she doesn’t like, and no one wants a sad Kavi.

But I think we’ll make this with the chickpeas from now on, with the hopes that if she tries one or two every time, she’ll eventually get used to them, and even start to like them. That’s generally how it works with her — it’s just a slow, slow process. Patience is key to changing food habits around here! 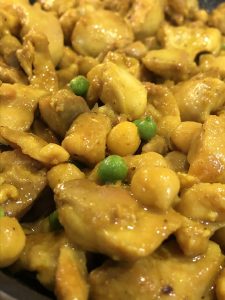 Will have the recipe in the new Gluten-Free Serendib ebook going out to Kickstarter backers, but here it is, just for you!

3. Add chicken and sear on high, turning to brown all sides.

4. Reduce heat to low, add chickpeas, and cover; cook approximately 15-20 minutes, until meat is cooked through.

5. Uncover and cook until all the liquid is gone. Stir in frozen peas and cook a minute or two more.

6. Tilt pan and push chicken pieces to one side; allow excess oil to drain to one side for 5 minutes. Remove chicken to dish and serve hot.