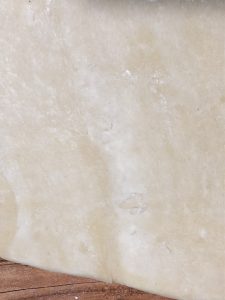 Triangles. I don’t know who figured out that croissants would look pretty if you made triangles and rolled them up, but good call, yo. 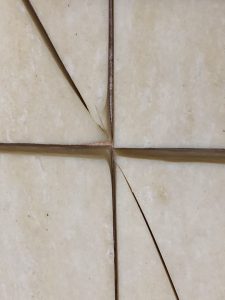 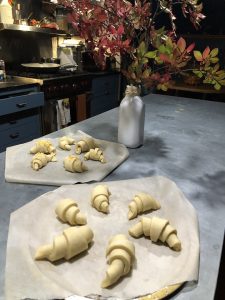 Pretty pretty croissants. Some of them do look a little thick; I could’ve rolled them more evenly. But they will taste good regardless. 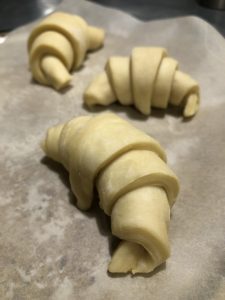 The kids wanted to try the croissants before bedtime last night, so even though they hadn’t had time to rise, and I hadn’t had a chance to brush them with egg, I tossed a few in the toaster oven. Just as well I did, because the temp suggested (425 for 15 minutes, drop to 350 for 10-15) was too high for my oven — these burnt just a bit. Without rising, they were pretty dense too! 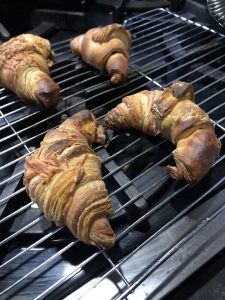 The kids ate them anyway, but a) protested the dark chocolate in some of them, and b) like the Pillsbury crescent rolls better. I promised to make them some of those today, stuffed with apple and cheddar, and some milk chocolate ones too, once I pick up some milk chocolate. I think Kavi and Anand felt quite sorry for Mommy after all the work they’d seen me putting into these; they were very apologetic about not finishing their croissants!

This batch had enough time to rise properly. Now that’s a better color. Please note the literal POOL OF BUTTER. 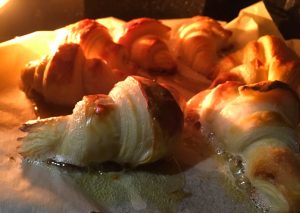 It doesn’t look like 81 layers, but it’s certainly a lot of layers. 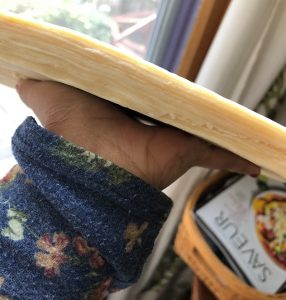 Look, I’m not saying I’d win the technical challenge, as these are not PERFECTLY the same size, but for a first pass at croissants, they’re not terrible. I wouldn’t be embarassed to have these at my station for the judging. I lowered the heat to 400 for the first 15 minutes, 350 for the next 15, which I think is about right for my oven. 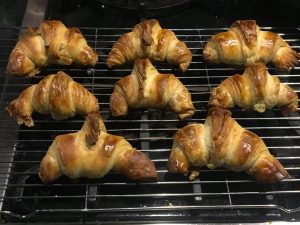 (And I think the bigger ones at the bottom are stuffed with chocolate and cheese, respectively, in my defense.)

Final croissant-making notes — they’re good, but not perfect. The exterior is MUCH flakier than a Pillsbury crescent roll, which makes them somewhat messy to eat, but quite satisfying — I believe the King Arthur flour recipe described these as ‘shatteringly crisp,’ which is about right. 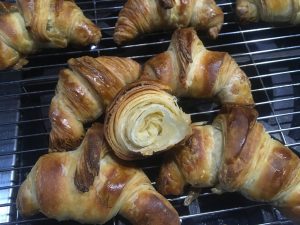 The interior is rich and buttery and I did very happily just eat an entire croissant. But my complaint is that they did not come out as light and airy as the ones I ate in Paris, or at Léa, the French cafe two blocks away from me. Kev and I spent a while trying to diagnose what went wrong, and I’m not sure I’ve convinced him, but I *think* I overworked the dough.

When I first started mixing it, I mixed it in the stand mixer with a dough hook, and it wasn’t coming together well, so then I turned it out and started kneading it, but after five minutes of kneading, it still wasn’t holding together, so then I added a little water and it finally came together, and then I kneaded it some more. I think all of that probably doubled the working time on it (from 5 minutes to 10 minutes) and made it tougher than it should’ve been.

And then THAT may have led to it being SO HARD to roll them out. I mean, I was seriously feeling like a wimp — after two turns and roll outs, both times, I broke a sweat and felt a little shaky, even though I was working in a cool kitchen. If the dough was tougher than it was meant to be, maybe it made rolling out harder than it should’ve been?

I hope so, because that is the ONLY possibility that makes me even think about attempting these again some day. And even so, if I do them again, I plan to have Kevin ready and waiting to help with the roll outs, in case that wasn’t the issue, and the dough is just normally that difficult to roll.

Ah well. All that said, I have several croissants to eat and feed people in the next day or two, and they are yummy, and I have half a batch of rolled out dough in the freezer, and in a few weeks (after the intense rush of finishing all the sweet & curry powder prep for the Kickstarter ship out of Feast), I’ll pull it out and experiment with some Sri Lankan-inspired fillings for croissants. Suggestions welcome! My first thought was seeni sambol, but that actually seems like it’d be too much oil in a croissant. Passionfruit chocolate, though….

As for whether I’ll ever make croissants from scratch again — we’ll see! Thanks (?) to Pooja Makhijani, food inspiration, for the challenge.