Odd start to the weekend — I slept until almost 10, which was not my plan — I must have needed it badly. When I got up, went pretty much straight into a Serendib Press work meeting with Stephanie and Heather. Coffee was helpful. Coffee and meds!

Heather took the train out from Ann Arbor this weekend, to help with Bite Nite, but also to get some work done with me, meet Stephanie in person (also hopefully Cee Gee and Karen for the SLF), and have a sort of annual meeting for Serendib Press, though I didn’t really realize that’s what we were doing until halfway through the meeting.

We worked for 1.5 hrs, mostly recapping where we are at this point (Heather’s been working with me for a year now; Stephanie started last fall, so close to six months?), sketching out rough plans for the next few years of the Press.

Immediate goals are getting Feast up and off the ground well, hopefully. Next goal (might not happen until summer) is getting my backlist back under my control and start producing it again, making it easier for people to buy my books (and hopefully setting up some nice passive income to sustain future anthology and other projects). It’s going to be challenging, but hopefully productive? We’ll see. The shoestring budget is more of a cobweb at the moment…

At 1, Kevin, Heather, and I are going to spend an hour on organizing Serendib Press stuff in the basement, which is utter chaos right now — it was so harried prepping for yesterday’s Bite Night after a full week of teaching work that I completely failed to keep things organized, so we’re literally tripping over boxes and such at the moment, can’t get to the freezer, etc. This can’t go on.

But first, a break. I’m going to put a load of laundry in, then play a video game and watch some dumb TV, rest a little. Heather and I were on our feet for about six straight hours last night (me after a day of teaching), so am a bit tired. I definitely am not in physical shape for doing food production work full-time. 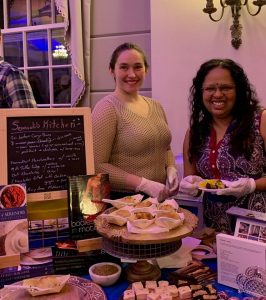 Lots of people asked us last night where our restaurant was located (I should have put Serendib Press instead of Serendib Kitchen on the sign, which might have helped), and I admit, every time I said, “Oh, there’s no restaurant — I’m a writer, not a cook,” I felt a little relieved!

(All of which just gives me even more admiration for the delicious Filipino food produced by Chef Roel and his family for pig & fire — I think they have another event happening in the city today. They have a young kid, his wife is a resident; the food world is tough, people! It was great seeing them last night — their delectable pancit and lumpia sustained me through the long hours…)

Several people asked me if Serendib Kitchen did catering. After I got over my first impulse to laugh maniacally, I admitted that it was not outside the realm of possibility (I actually did a bit in college!), but there’s a set of food licensing, renting space in a commercial kitchen, etc. stuff that would need to happen first. Carnivore (only a block away) did offer to rent me space in their commercial kitchen…

It would be a VERY occasional thing if so. But, um, possible…? Esp. this year, while promoting the cookbook. Locals, talk to me if interested. We’re also planning on some pop-ups at Carnivore, The Beer Shop, etc. — calendar coming soon!