Sunday dinner was Kavi’s turn, and she picked sushi, which is sort of a funny choice, given that the only sushi she has historically been willing to even try are California rolls. But okay. Kevin doesn’t eat fish, Anand wasn’t sure he wanted to even try sushi, so this was going to be interesting.

But it actually turned out okay, in large part because I got my groceries at H Mart, which is I think mostly Korean with a good supply of Japanese. They had everything I needed in easy packaging, including some already marinated beef, which Kevin could grill for us, and which I was pretty sure would be a reliable way to feed Anand. (They also had both American cucumber and Korean cucumber — the latter is lovely, with a delicate, sweet flavor.)

The kids were startled by the intense scent of the seasoned rice vinegar hitting the rice — we almost lost them then.

But they had a blast deciding what they wanted to put on their sushi, and rolling it up. Whew. Anand went for the sweet omelette, grilled meat, and bell pepper. Kavi was indignant that they’d made eggs sweet — she was not expecting that. She didn’t even try for a California roll, in the end, going for beef, bell pepper, and avocado. Kevin did cucumber and avocado, and I indulged myself with salmon, avocado, cucumber, and tobiko.

The kids did not try the wasabi, soy sauce, or pickled ginger. We’re going to have to ease them into other cuisines, clearly.

The kids loved getting to be artistic with their food. Anand hit upon the idea of using tobiko (which he had no intention of eating) to decorate his plate, and Kavi was envious that he’d managed to coordinate the tobiko, the bell pepper, and his orange shirt. 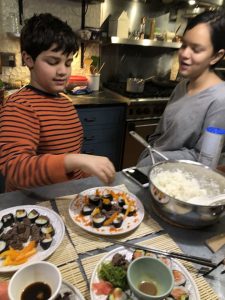 (I ended up eating his tobiko. No food waste in this house!) 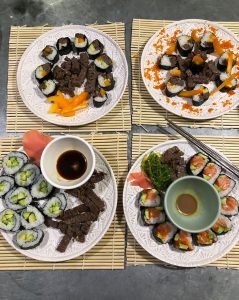 Overall, the kids probably liked the flavors of this the least of the 6 family dinners we’ve done so far this year (Daddy’s baked chicken wrapped in cheese and prosciutto is the standout hit so far), but they did eat enough to count as a meal, which was good. And they want to do it again, which is great — a lot of this is simple unfamiliarity. If we keep having food from other cuisines, their palates should get more accustomed.

Fingers crossed, anyway. I *love* sashimi, so the more I can get them headed in that direction, the happier I’ll be. I was in my 20s the first time I had sushi, and the guy I was dating had to coax me in with California rolls because I was intimidated by the raw fish concept. How things have changed! 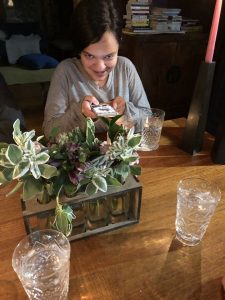 (We don’t usually have phones at the table for family dinner, but in this photo, Kavi is photographing her food for her Instagram feed. Like mother, like daughter…)