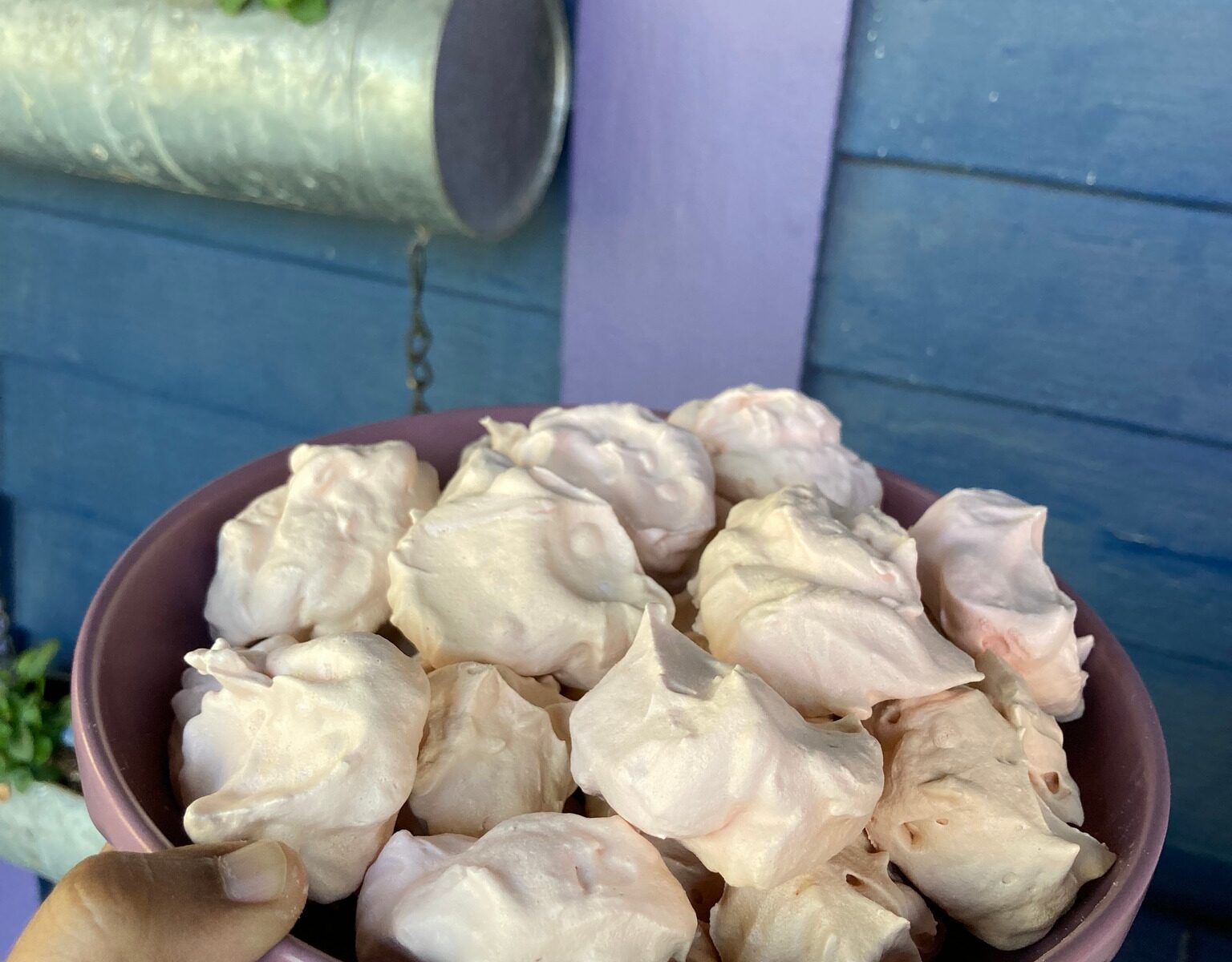 I made these to serve triple duty — I wanted to put some out at yesterday’s event, I’ll include them in the next batch of Patreon boxes, and I also just like have meringue kisses around for nibbling on — they’re perfect when you want a tiny hit of delicate sweetness.

So I made a triple batch, which took two rounds in the mixer and the oven, but I figured most people would go for a more modest single batch, so that’s the recipe I’ve written up here. Remember to save those extra egg yolks to make some curd — passionfruit curd is very hard to beat.

If I were making these for folks from South Asia or the Middle East, I’d go heavier on the rose, but for Americans, light rose generally goes over better. It takes a little getting used to, though interestingly, before vanilla became easily accessible here, rose was a dominant flavoring in early America!

IMPORTANT NOTE: If you attempt to make meringues on high humidity days, they may deflate significantly. (They’ll still be tasty, though, just a little more dense & chewy.) Proceed at your own risk.

2. Using an electric mixer and a large bowl, beat egg whites with cream of tartar on high speed, until the mixture forms stiff peaks. Set aside.

3. Make rose-cardamom syrup: in a small saucepan, combine sugar, water, rose extract, cardamom, salt, and food coloring (if using). Bring to a simmer over low heat, stirring until the sugar dissolves. Simmer for another minute or two, stirring constantly, and then remove from stove.

4. Turn mixer with beaten egg whites on high, and slowly pour the syrup in a thin stream into the whites. Beat until syrup is incorporated and the meringue is stiff and shiny.

5. If you’re feeling fancy, transfer meringue into a plastic bag or pastry bag, using a star tip to make meringues. But I always just drop by spoonfuls (it helps to use the back of a second spoon to slide the meringue off the first spoon) onto the prepared baking sheet. They look charmingly rustic that way.

6. Bake until the meringues are firm to the touch, 60-90 minutes. Don’t remove them, or the insides will be chewy. Just turn off the oven and allow them to cool as the oven cools, to finish baking the interiors. You can leave them overnight if you like; they’ll be just fine.